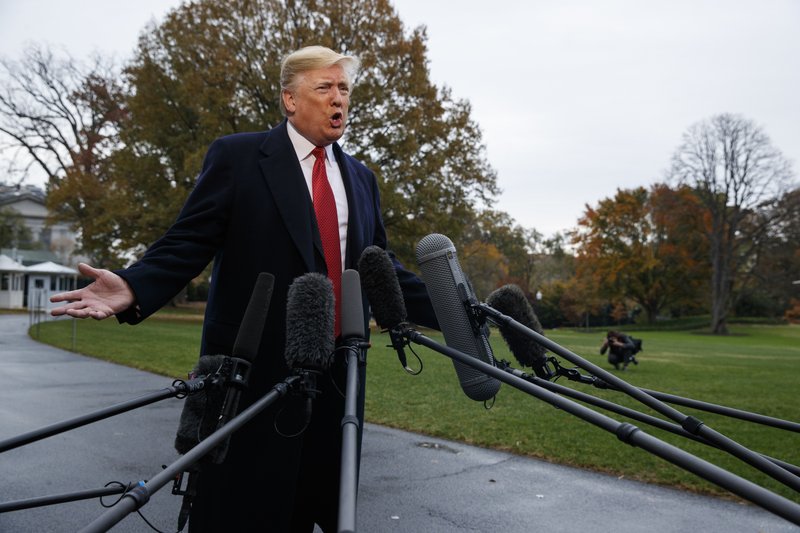 US President Donald Trump talks with reporters before departing for France on the South Lawn of the White House, Friday in Washington. (Photo: AP)

The comments Friday from Trump and Senate Majority Leader Mitch McConnell, R-Ky., came as Whitaker’s past business ties and remarks on Mueller’s probe and other topics drew scrutiny from Democrats and ethics groups.

“I don’t know Matt Whitaker,” Trump told reporters at the White House before leaving on a trip to France. That contradicted Trump’s remarks on Fox News last month, when he called Whitaker “a great guy” and said, “I mean, I know Matt Whitaker.”

McConnell, separately, said, “I think this will be a very interim AG.” And Sen. Susan Collins, R-Maine, said she was concerned by some of Whitaker’s past comments and called for legislation that would place limits on his ability to fire Mueller. That would include specifying that only a Senate-confirmed Justice Department official, which Whitaker is not, could dismiss the special counsel.

Whitaker, a Republican Party loyalist and chief of staff to just-ousted Attorney General Jeff Sessions, was elevated Wednesday after Sessions was forced from his job by Trump.

Since Wednesday, Whitaker has faced pressure from Democrats to step aside from overseeing Mueller, based on critical comments Whitaker made about the investigation before joining the Justice Department last year.

Whitaker wrote an op-ed article saying Mueller would be straying outside his mandate if he investigated Trump family finances. Whitaker also gave a talk radio interview in which he maintained there was no evidence of collusion between the Kremlin and the Trump campaign. He also tweeted an ex-prosecutor’s opinion piece that described a “Mueller lynch mob” and said it was “worth a read.”

There have been reports about Whitaker’s past comments questioning the power and reach of the federal judiciary, and about his ties to an invention-promotion company that was accused of misleading consumers.

The Wall Street Journal on Friday published an email revealing an FBI investigation into the company, World Patent Marketing Inc. The July 10, 2017, email was from an FBI victims’ specialist to someone who, the newspaper said, was an alleged victim of the company. A Justice Department spokeswoman told the Journal that Whitaker was “not aware of any fraudulent activity.”

Also Friday, The Associated Press reported that Whitaker repeatedly chided Democratic presidential nominee Hillary Clinton in public statements during 2016 while he was speaking for a group that is barred by its tax-exempt status from supporting or opposing political candidates during a campaign.

Whitaker has tried to stay out of the public debate. He sent a department-wide note after his appointment in which he said, “As we move forward, I am committed to leading a fair Department with the highest ethical standards, that upholds the rule of law, and seeks justice for all Americans.”

Legal scholars are debating the constitutionality of his appointment. Some lawyers say it is illegal because he has not been confirmed by the Senate.

Even as Trump seems to be distancing himself from Whitaker, two Republicans close to the president said Trump had enjoyed Whitaker’s TV appearances and the two had struck a bond. Those TV appearances included one on CNN in which Whitaker suggested that the Mueller probe could be starved of resources.

Trump told associates that he felt Whitaker would be “loyal” and would not have withdrawn from the Russia probe, as Sessions had done, according to the Republicans. They were not authorized to speak publicly about private conversations and spoke on condition of anonymity.

Trump said Friday he had not spoken with Whitaker about Mueller’s investigation, which until now has been overseen by Deputy Attorney General Rod Rosenstein. Later in the day, Trump tweeted that he did not personally know Whitaker, a former federal prosecutor in Iowa, but several Republican leaders in that state respected him. “I feel certain he will make an outstanding Acting Attorney General!”

Rosenstein told reporters Friday that based on his experiences with Whitaker, “I think he’s a superb choice for attorney general.”

Of the scrutiny Whitaker is facing, Trump said, “It’s a shame that no matter who I put in they go after.”

“The president has said repeatedly he’s not going to dismiss the Mueller investigation,” McConnell told reporters at Kentucky’s Capitol. “He’s said repeatedly it’s going to be allowed to finish. That also happens to be my view.”

Trump has not said whom he will nominate to permanently replace Sessions.

Trump told reporters he has not discussed the post with Christie, who he said was “a friend of mine” and “a good man.”