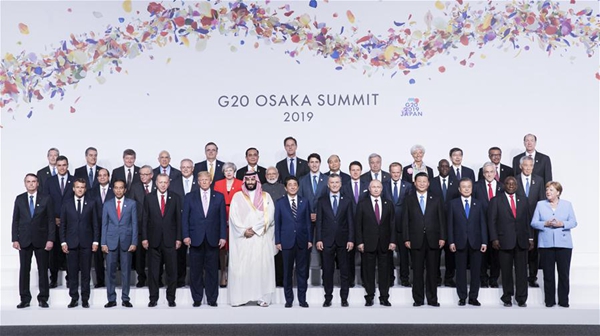 At the ongoing 14th Group of 20 (G20) summit in Osaka on Friday, several heads of state and experts all expressed concern over the current global trade situation, and called for insistence on free trade.

Japanese Prime Minister Shinzo Abe expressed his grave concern regarding the current situation on global trade. "A free and open economy is the foundation of global peace and prosperity," he said, "While anxiety and discontent with abrupt changes due to globalization can at times generate the temptation for protectionism, bringing about sharp confrontation between states."

At a summit session, South Korean President Moon Jae-in also expressed concerns over the growing trade disputes and protectionism, and urged world leaders to return to free trade and benefits all.

Russian President Vladimir Putin said at a BRICS leader meeting on the sideline of the G20 summit on Friday that the international trade is carrying an increasingly heavier burden of protectionism, politically motivated restrictions and barriers.

Since 2018, the US government has provoked trade disputes by imposing excessive import tariffs on its major trading partners with excuses of trade imbalance and excessive deficit, which have worsened global trade environment and been criticized worldwide.

"Such a non-negotiated unilateral imposition of tariffs by the current US government can only trigger counter-measures. Both the European Union and China have fought back. In this way, the world's trade volume will decrease, and the world economy will go into recession. America's actions are a foolish move to cut off the world's path to prosperity," said

Swaran Singh, a professor at the School of International Studies at India's Jawaharlal Nehru University, said, "With the United States being the world's largest economy, its protectionism policy has surely rattled global business and economic relations."

"Major economies are so intensely intertwined that it is insane to imagine sealing economic interactions within national borders or dictating terms to other sovereign nations," he added.

In the G20 Finance Ministers and Central Bank Governors Meeting held in Fukuoka on June 8-9, the finance ministers and central bank governors said in a communique that they "note the importance of monitoring all components of the current account, including service trade and income balances" when assessing external balances.

According to statistics from China's Ministry of Commerce, in 2018, the China-U.S. trade in services exceeded 125 billion U.S. dollars, and China's deficit in services with the United States was 48.50 billion dollars.

Haruhiko Kuroda, governor of the Bank of Japan, said the international current account imbalance is a complicated issue concerning macroeconomic savings, investment balances among multiple countries, and structural factors such as the aging of population.

Therefore, the international current account imbalance should not be solved by bilateral trade measures, it requires the international community to jointly promote structural reform, Kuroda said in May in Tokyo in a Think 20 summit, one of the Engagement Groups of the G20.