ROME, June 22 (Xinhua) -- Ministers of education from the Group of 20 (G20) agreed on Tuesday that education should be a centerpiece of the international political process as the world works to emerge from the coronavirus pandemic. 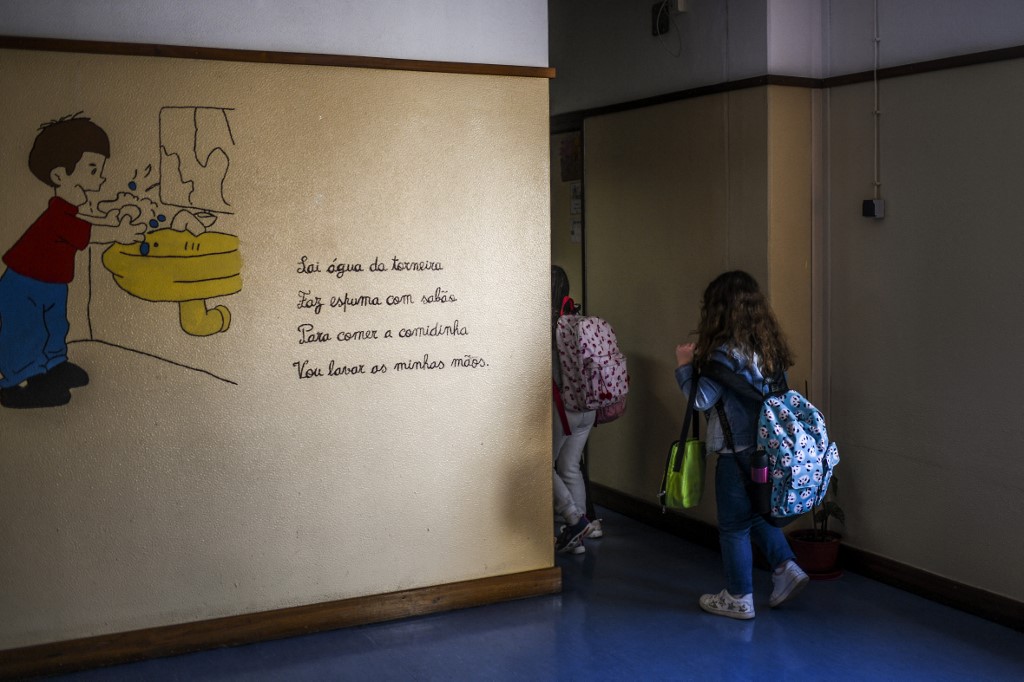 Children pass by a mural on a wall depicting a kid washing hands as they arrive at their classroom at the Condes da Lousa school for the first time since the government imposed a second general lockdown, in Amadora, outskirts of Lisbon on March 15, 2021. (Photo: AFP)

The ministers participated in person in Catania, Sicily in Italy, and via video hookup, in the Education Ministers' Meeting, which is one of the ministerial meetings organized as part of the G20 Leaders Summit 2021 to be hosted by Italy in October 2021.

In the final communique, the ministers committed to "leave no one behind." In concrete terms, that included addressing educational poverty that has been exacerbated by the pandemic, including the adoption of preventive measures to limit exclusion from education systems, particularly in poor countries.

In the communique, the ministers re-affirmed what they called "the fundamental role of education for inclusive economic growth, equity, equality, human dignity, social inclusion, and wellbeing."

The ministers also recognized "the importance of putting education at the center of the political agenda as part of the recovery from the present global crisis to build back better and with resilience for the future." They also called the right to education a "basic human right."

Schools around the world were shuttered during the worst stages of the pandemic. Distance learning, though proved useful, the ministers also recognized the "irreplaceable role of the school which provides face to face education as well as a safe place for all children."

Much of the attention was focused on access to education in poor and developing countries where students face what the ministers called "disproportionate challenges and a higher risk of falling further behind due to the pandemic and other socio-economic factors."

They called for measures to be taken that are "preventive, tackling the structural roots of exclusion, interventionist, addressing the needs of students, and compensatory, providing second chance opportunities for those who have left school, or have experienced significant learning losses."

Italian Minister of Education Patrizio Bianchi, host of Tuesday's talks, praised the progress the ministers made.

"From Catania, we are launching a global alliance to ensure that the post-pandemic world continues to look at education as a protagonist of any recovery," the minister said.

Analysts said the topics discussed were important to help build resilience in poor countries, better equipping them to withstand the impacts of global events like the coronavirus pandemic, natural disasters, or economic downturns.

"Learning is the backbone of any modern society but it doesn't always have to take place in schools," Pietro Paganini, founder of the Competere think tank and a frequent commentator on educational issues, told Xinhua. "Learning can happen in many places and in many ways, but schools are where we learn how to learn. That is essential."

In remarks to Italian journalists, Bianchi also addressed some local issues as well, promising that some of the money from the European Union's post-pandemic recovery fund would include money for creating more full-time jobs for teachers, improving salaries, and modernizing school facilities across the country.