G20 energy ministers pledged to work together to ensure oil "market stability", in a statement released Saturday after a virtual summit hosted by Saudi Arabia that did not mention production cuts. 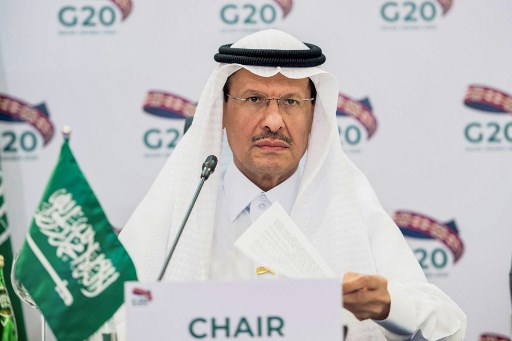 The summit came after an output cut agreement between OPEC and its allies to shore up crude prices hit an impasse, with Mexico rejecting the proposed curbs.

The standoff had cast doubt on efforts to bolster oil prices, pushed to near two-decade lows by the demand-sapping coronavirus pandemic and a Saudi-Russia price war that rattled global markets.

The subsequent G20 talks were expected to seal the deal more widely with non-OPEC countries in the group including Mexico, the United States and Canada, but there was no mention of cuts in the group's final statement.

"We commit to ensure that the energy sector continues to make a full, effective contribution to overcoming COVID-19 and powering the subsequent global recovery," the statement said.

"We commit to work together in the spirit of solidarity on immediate, concrete actions to address these issues in a time of unprecedented international emergency.

"We commit to take all the necessary and immediate measures to ensure energy market stability."

Mexico is the lone holdout in the multilateral OPEC-led deal to slash output in May and June by 10 million barrels per day. The cuts would gradually be reduced until April 2022, according to the deal.

Under the deal, Mexico was expected to cut production by 400,000 barrels per day but the country resisted during the overnight talks.

But Mexico's President Andres Manuel Lopez Obrador said he had reached an agreement with his US counterpart Donald Trump to cut production by only 100,000 bpd.

Trump confirmed the deal, saying the United States will "make up the difference" by cutting "some US production".