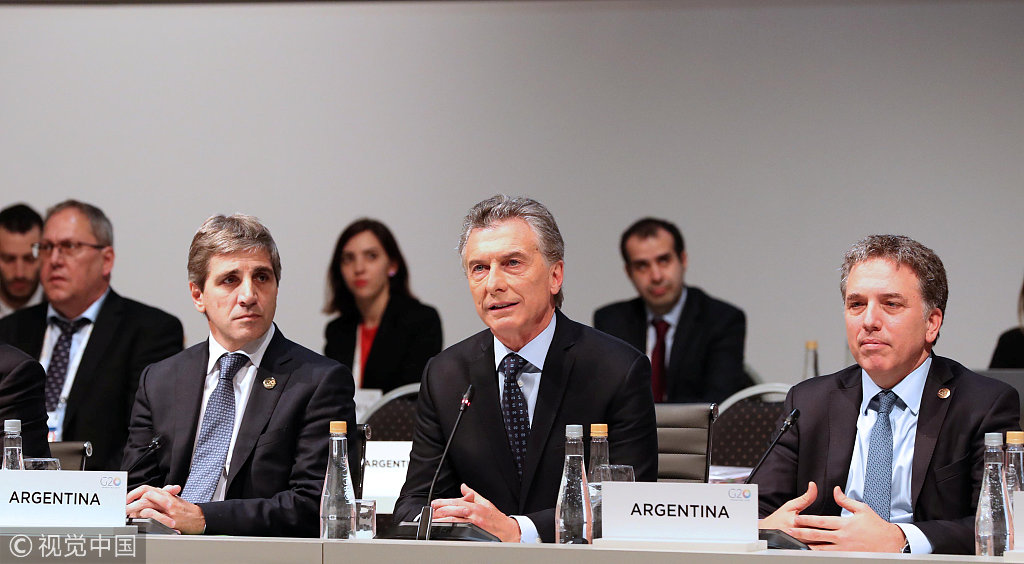 It comes at a time when US President Donald Trump's protectionist policies have provoked ire from traditional allies such as the European Union, Canada and Mexico, and sparked a series of retaliatory measures.

The G20's final communique stressed "the need to step up dialogue and actions to mitigate risks and enhance confidence" amidst fears of an escalating global trade war.

While the statement did not mention the United States, which is at the center of trade disputes with G20 members China, the EU and others, it demonstrated more concern than in March, when the group avoided the issue altogether.

Argentina's Economy Minister Nicolas Dujovne hinted that the G20 could not afford a rupture over trade disputes which he said should be resolved directly between governments or through the World Trade Organization.

"It's not about denying differences," Dujovne told reporters at the conclusion of the meeting. But "we have to try to emphasize consensus because we recognize the importance of keeping this group alive and in harmony."

During the 2008 global financial crisis the G20 was critical in preventing an even worse outcome and saved millions of jobs, he said, noting that "it's in the bad times when you see how essential it is."

But Treasury Secretary Steven Mnuchin reiterated his claim that the US merely wants "more balanced trade" with other countries.

Mnuchin also dismissed the economic impact of the raft of tariff hikes and retaliatory duties, saying so far they have only affected the US on a "micro" scale. But from a "macro standpoint we do not yet see any significant pattern on the economy."

US businesses have been hit with a series of punitive measures by China, the EU, Canada and Mexico, including tariffs on soybean, motorcycles, bourbon and other goods, while manufacturers are complaining about rising prices of key supplies subject to new US duties.

The US and EU have been at loggerheads since Trump angered European allies by imposing tariffs on steel and aluminum. He also has threatened to hit auto imports with duties which would be especially hard for Germany.

While the EU is "willing to build bridges," Moscovici told reporters "we believe that targeting us is certainly inappropriate... and that we must act with the US as allies -- not foes but allies."

Mnuchin insisted the US wants to "resolve the trade issues with the EU" and the complaint often is more about "non-tariff barriers" than tariffs.

"We have a trade imbalance with many countries as a result of not exactly free and fair trade," he said. Earlier in the meeting he said the dispute with the EU could be resolved by agreeing to trade with no tariffs, no barriers and no subsidies.

Muscovici warned that "further trade escalation conflicts would negatively affect" all the countries involved, the US included. Protectionism benefits no one, and creates "no winners, only casualties."

International Monetary Fund chief Christine Lagarde agreed, and again spoke out against the tit-for-tat tariffs and urged that "trade conflicts be resolved via international cooperation without resort to exceptional measures."

The IMF warned recently that in a worst-case scenario, $430 billion of global GDP -- or a half percentage point -- could be lost in 2020 if all tariff threats and retaliations are carried out.

As well as imposing tariffs of 25 percent on steel and 10 percent on aluminum, Trump hit China with a 25 percent punitive levy on $34 billion of goods, with tariffs on the way on an additional $16 billion, and $200 billion more under consideration.

And in a television interview aired last week, Trump threatened to impose duties on the entire $500 billion of goods the US imports from China.

The US has long complained that China steals US technology through forced transfers or outright theft, and the issue is at the heart of Trump's trade offensive.

Mnuchin said, "we want to have the right to protect our IP and our technology, anywhere in the world, that's not just China specific."