Foreign ministers of the Group of Seven (G7) failed to issue a joint declaration Wednesday after US Secretary of State Mike Pompeo pressed to label the novel coronavirus as “Wuhan virus”, according to the German magazine Der Spiegel. 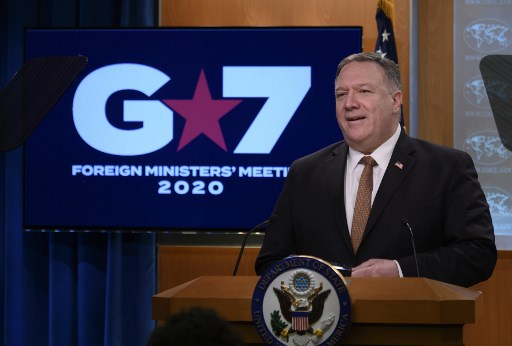 US Secretary of State Mike Pompeo speaks during a press conference at the State Department in Washington, DC, on March 25, 2020. (Photo: AFP)

The secretary insisted on the description and stepped up the use of it in recent weeks, even though the WHO have cautioned against the label because "viruses know no borders and they don't care about your ethnicity."

Held on video because of the COVID-19 outbreak, the G7 meeting recognized the need for joint efforts to fight the global pandemic. However, Pompeo’s push didn’t get a common response, which blocked the issuance of a joint statement.

"What the State Department has suggested is a red line," a diplomat from a European country told CNN. "You cannot agree with this branding of this virus and trying to communicate this."

After the meeting, Pompeo didn’t deny the disagreements over the label in his news conference, but said all the ministers had a "common understanding" on the health and economic crisis caused by the "Wuhan virus". However, Other foreign ministers were not nearly as emphatic in their own comments about the meeting.

French Foreign Minister Jean-Yves Le Drian said in a statement that he "underscored the need to combat any attempt to exploit the crisis for political purposes," likely a veiled response to Pompeo, according to the AFP.

Le Drian also “expressed the view that the unity of all in order to effectively combat the pandemic must now take precedence over any other considerations.”

“The United States is the new COVID-19 ‘epicenter’ (per WHO),” former US Special Presidential Envoy Brett McGurk said. “Can this really be our agenda with the G7?”

Last week, US President Donald Trump repeatedly called the coronavirus as “Chinese virus” and insisted that the description is “not racist at all,” but soon he steered away from it "as critics have said they foster discriminatory sentiments and behavior against Asians and Asian Americans."

“No other country in the world calls it ‘China virus’ or ‘Wuhan virus’ or whatever racist name Trump and Pompeo use, which shows it’s not some geopolitical strategy to call it that,” political commentator and former US Deputy National Security Adviser Ben Rhodes tweeted.

“It used to be that in a global cirsis the US would lead the world in building coalitions for concerted action to address the problem at hand. Now we’re trying to enlist allies in a counter-productive (and racist) blame game even while the crisis explodes,” the former US Ambassador to NATO said.