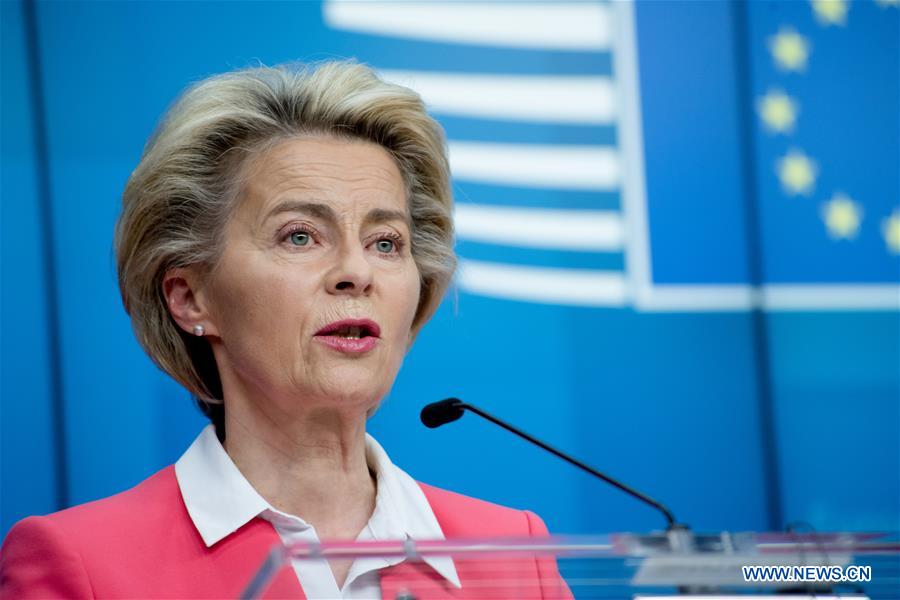 "We all agreed that it is our moral duty to help the Afghan people and to provide as much support as possible as conditions allow," von der Leyen said at a press conference following a meeting of G7 leaders.

"To protect these most vulnerable, it is clearly a matter for global cooperation and it has to be dealt with as such from the start. These people should not fall into smugglers' hands, they need safe pathways," she added.

She said the Commission will propose to almost quadruple the humanitarian aid coming from the European Union (EU) budget, to "over 200 million euros (236 million U.S. dollars) for the year 2021. This will help meet the urgent needs of Afghans both in Afghanistan but also of course in the neighbouring host countries."

However, von der Leyen added that "the future development assistance has to be condition-based. It always is condition-based, linked to fundamental values, human rights, and of course women's rights."

The EU has set aside one billion euros for Afghanistan's development in the next seven years. But "the aid is frozen" until the bloc "has solid guarantees and credible actions on the ground that the conditions are being met," von der Leyen said.

Addressing the same press conference, Charles Michel, president of the European Council, called on the new Afghan authorities to allow free passage to all foreign and Afghan citizens who wish to get to the airport.

"We have also raised this issue with our American friends and partners on two particular aspects: first, the need to secure the airport as long as necessary to complete the operations; and second, a fair and equitable access to the airport, for all nationals entitled to evacuation," said Michel.

"Today it is too early to decide what kind of relations we will develop with the new Afghan authorities," he noted. "We call for an inclusive political settlement and if we want to remain a positive influence for the Afghan people, especially in supporting their basic needs, we will have to deal with the new authorities. This will be subject to strict conditions, regarding the deeds and attitude of the new regime," he added.

In a joint statement issued after a virtual emergency meeting, the leaders of the United States, Britain, Italy, France, Germany, Canada, and Japan called for "calm and restraint to ensure the safety and security of vulnerable Afghan and international citizens, and the prevention of a humanitarian crisis."

The G7 leaders also expressed "grave concern about the situation in Afghanistan."

They added: "Our immediate priority is to ensure the safe evacuation of our citizens and those Afghans who have partnered with us and assisted our efforts over the past 20 years, and to ensure continuing safe passage out of Afghanistan. We will continue to coordinate closely on this."