G7 Leaders posed for a family photo in the French oceanfront town of Biarritz on Sunday evening as a sign of unity, but the meetings have been marred by sharp differences on key issues. 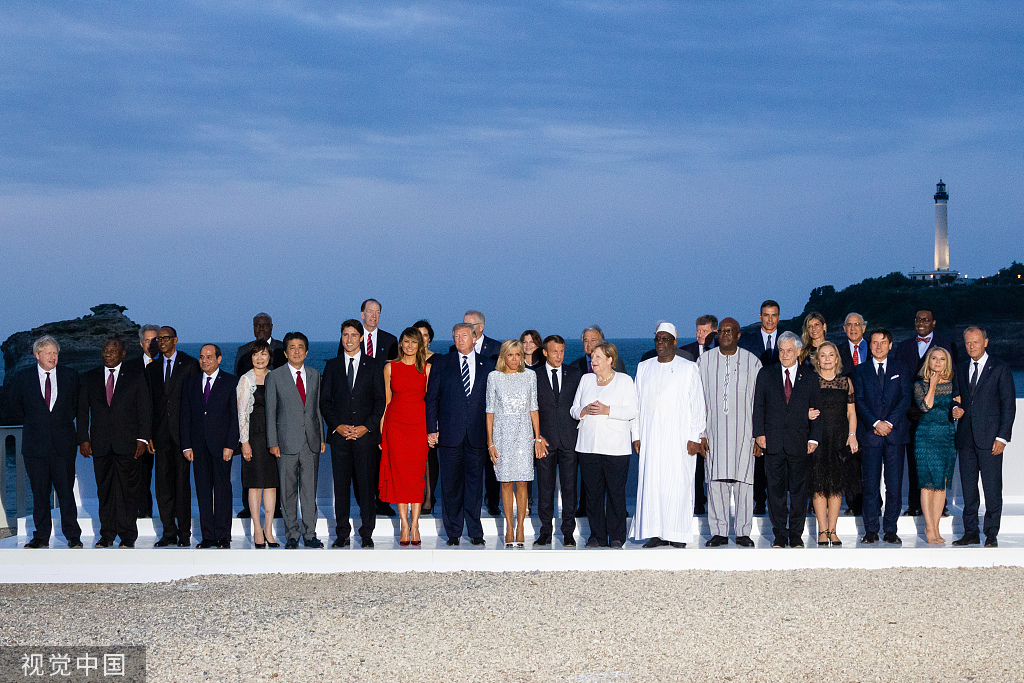 G7 leaders and guests pose for a family picture with the Biarritz lighthouse in the background on the second day of the annual G7 summit. (Photo: VCG)

It is the first time in the 45-year history of the G7 summit that no joint communique is issued. Leaders had stark differences over trade, climate change, Iran nuclear issues and inviting Russia back to the table.

In a meeting with US President Donald Trump on Sunday morning, British Prime Minister Boris Johnson congratulated Trump on "everything the American economy is achieving", and quickly added: "But just to register a faint sheep-like note of our view on the trade war: We're in favor of trade peace on the whole, and dialing it down if we can."

"We think that, on the whole, the UK has profited massively in the last 200 years from free trade, and that's what we want to see... We don't like tariffs on the whole," said Johnson, whom Trump has often praised.

Like Johnson, many European leaders, from European Council President Donald Tusk to French President Emmanuel Macron, voiced their opposition to the trade wars during the meeting.

When asked by reporters on Sunday, Trump admitted to having second thoughts about raising tariffs against China. The words have been widely interpreted as hope for a possible truce between the world's two largest economies.

Some analysts interpreted the move as White House crisis management of Trump's conciliatory message which might be harmful to his 2020 election campaign.

Trump has been sending conflicting messages on China trade. On Sunday he said US and China were getting along very well and were talking. On Monday, Trump said that China is ready to come back to the negotiating table and the two countries will start talking very seriously.

"I think we are going to have a deal," he said, according to CNBC.

While Trump was isolated on the trade war at the summit, he claimed victory on Sunday when he and Japanese Prime Minister Shinzo Abe said they hope to sign a trade deal in New York next month.

Trump said that Japan had agreed to purchase excess US corn, but Abe referred to a potential buy of the corn and said it would be handled by the private sector.

Abe said that more work remained, but expressed optimism that it would be finalized in September.

Aside from trade, Trump met strong opposition from other leaders about whether to invite Russia back to the G7 summit. Russia was kicked out of the G8 in 2014.

On Sunday, the French government said G7 leaders had agreed during the Saturday dinner that it is far too soon for Russia to be invited to rejoin the exclusive club.

But Trump said no such decision had been taken to keep Russia out. The US will be the host of next year's summit and the host usually can decide who is invited, but doesn't have the power to restore membership.

"Trump evidently fought vigorously at the G7 to have Russia invited back, but was rebuffed by the Europeans," Carl Bildt, former Swedish prime minister, said in a tweet on Monday.

Douglas Paal, a fellow at the Carnegie Endowment for International Peace, said the G7 is on life support. "Trying to bring Russia back into it will do nothing to revive it," he said.