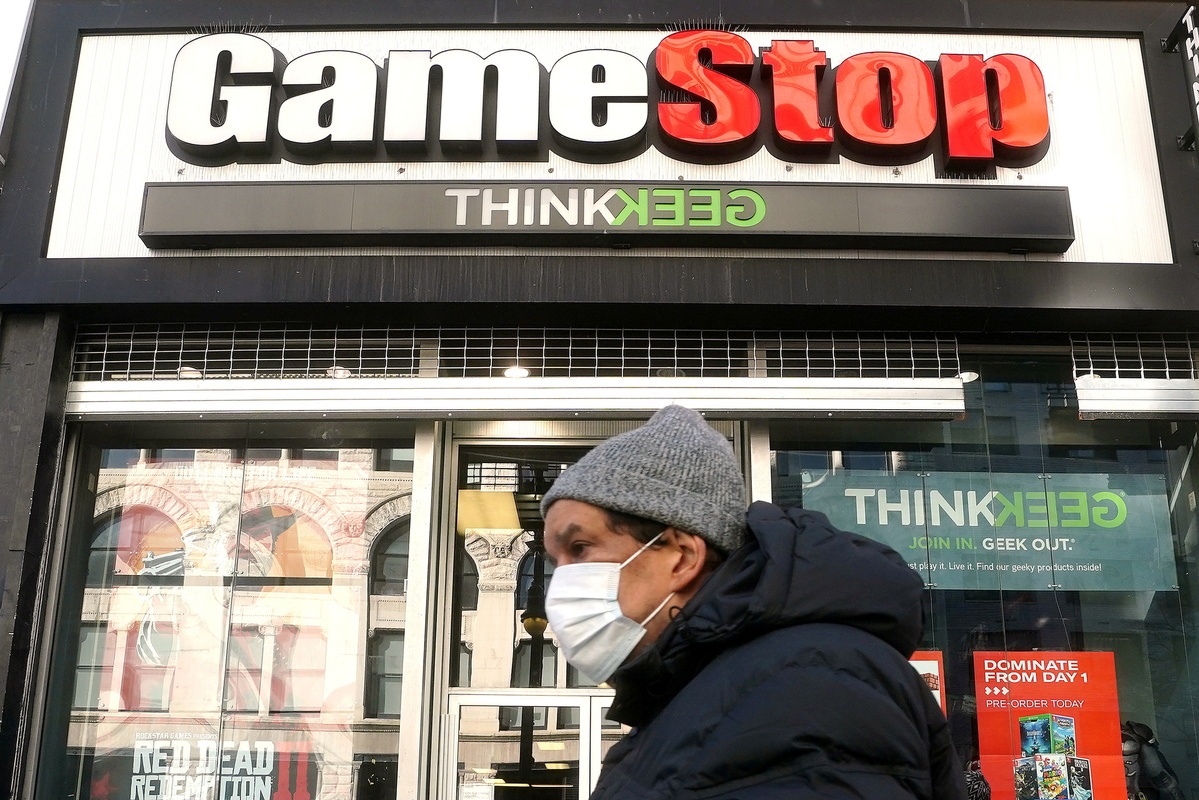 A person walks past a GameStop in the Manhattan borough of New York City, New York, US, January 29, 2021. (Photo: Agencies)

It looks like the latest installment of Wall Street vs Main Street.

The stock market has been in an uproar this past week over the wildly speculative trading in a handful of stocks, namely GameStop, a retail outlet that sells video games, and has drawn the attention of the US Securities and Exchange Commission, Congress and politicians from both sides of the aisle.

But the army of retail investors that have routed Wall Street professionals in recent days was dealt a blow on Thursday, after online brokerages Robinhood Markets and Interactive Brokers restricted trading in GameStop and several other stocks that had soared this week, including AMC Entertainment Group, which is majority owned by Dalian Wanda Group in China; American Airlines; Nokia; and BlackBerry.

Retail investors, celebrities and policymakers decried the restrictions, which allowed only selling, and online forums bubbled with anger.

Stocks are usually valued on their fundamentals; a crucial one is the price-to-earnings ratio. But fundamentals have been cast aside in this personal trading battle.

On the other side of the GameStop trade were some hedge funds that were "short" the stock. One of those funds is connected to the new owner of the New York Mets baseball team, billionaire Steve Cohen.

"Short selling" is a stock market practice in which someone borrows a stock from another holder and then sells it with the expectation that the stock's price will fall.

For example, if the short-seller borrows the shares at $50, sells them at that price and later buys them back at $20 to return to the lender, the profit is $30 a share.

The controversy over the retail-institutional standoff is somewhat reminiscent of the Great Recession of 2008, which was caused when several big Wall Street banks made bad bets on mortgage-backed securities. That crash led to the collapse of some established firms such as Bear Stearns and Lehman Brothers.

'Too big to fail'

Eventually, Congress and the US Treasury stepped in with financial lifelines to those banks, hence the expression "too big to fail".

The growth of apps like Robinhood, which now has more than 13 million users, has brought zero-cost trading to the cooped-up masses.

"I didn't realize it was this cultlike, "short-seller Andrew Left of Citron Research told The Wall Street Journal."It's just a get-rich-quick scheme."

The war began more than a week ago when hedge fund short-seller Left's bet against GameStop was met with a barrage of retail traders betting the other way. Left has since gotten out of the short position at a hefty loss.

As for GameStop, participants in online forums such as "wallstreet-bets" on Reddit had noticed that the stock was heavily bet against by large investors. The "go long-the-shorts" strategy spilled over into other shorted stocks.

Some hedge funds, such as Citadel and fellow hedge fund Point72, run by Cohen, bailed out Melvin Capital, one of the firms betting against GameStop.

"Unfortunately, it's definitely not a one-off thing," said Randy Frederick, vice-president of trading and derivatives at the Schwab Center for Financial Research. "The type of activity that drove that higher, I believe, has caused people to try to duplicate that in other names."