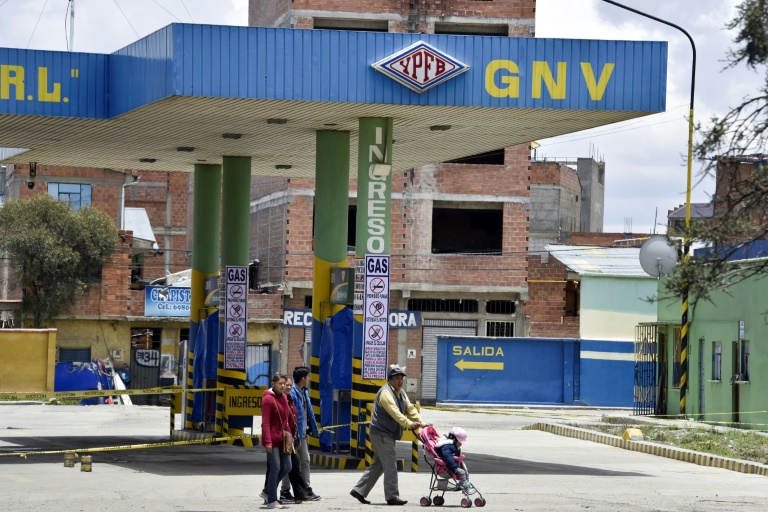 A service station in El Alto, Bolivia is closed due to the lack of gasoline, a problem affecting stations all over the country. (Photo: AFP)

Bolivian taxi driver Carlos Lara has spent three nights sleeping in his car at a service station, hoping that gas supplies held up by supporters of ex-president Evo Morales will make it through.

"No gas, no work," the 72-year-old Lara said Sunday as supporters of Morales continued to block a road leading from La Paz to a refinery to the east, leaving gas stations bone dry.

He has been waiting in his car since 7 am on Thursday and kills time by listening to the radio or chatting with taxi colleagues who, like him, are on the lookout for a truck with gas so they can get back to work.

"They tell us that the gas will arrive 'maybe tomorrow,' and the next day it is 'maybe tomorrow' again. And that is where we are right now," said Lara, pointing to several dozens of cars in line with him.

The scene is repeated at just about every gas station in La Paz, Bolivia's administrative capital and ground zero of a red hot political crisis.

Morales resigned a week ago amid violent protests over alleged fraud in his re-election to a fourth term in presidential voting on October 20.

Ever since then, Morales backers have demonstrated daily to demand the resignation of Jeanine Anez, a conservative senator who was legally in line to replace him and declared herself acting president on Tuesday.

Clashes have broken out with security forces, especially in the central city of Cochabamba, a Morales stronghold. Nine people died, according to the Inter-American Commission on Human Rights.

Protesters blocked a road leading from La Paz to the neighboring city of El Alto earlier this past week. They have now blocked the key supply route from La Paz to Santa Cruz, the country's financial capital, and to the center and east of the country, where farming is concentrated.

These demonstrators have also blocked the Sanketa refinery near El Alto, which supplies gasoline and natural gas to the entire La Paz region.

Colonel Rodolfo Montero, the new head of the Bolivian police, said Sunday that the regional commander in El Alto has begun a dialogue with the protesters. But no progress has been reported so far.

Lara says he has nothing against the protesters. In his opinion, the Anez government made a big mistake and could have calmed things down without calling out soldiers and police as it did near Cochabamba.

At the Mercado Rodriguez, an open-air market, a merchant who gave her name only as Maria and sells fennel, pepper, and other spices said she agrees with that assessment.

"There have been fatalities. Nine people were killed in Cochabamba!" she screamed. "I understand the demonstrators who are carrying out the blockade."

Maria said she has not raised her prices despite the crisis.

"And I will not do it, because there are people who are needier than I am," she said.

Not everybody at the market is so sanguine.

Gualberto Albornoz, munching on a banana, complains that on Sunday he bought a dozen of them for 15 bolivianos (a little over two dollars) whereas a week ago they cost him seven.

He blamed Morales supporters and says they do not understand that "it's all over. We have a government, and there are going to be elections" for president and congress.

At the market, vegetables, fruit, and spices are still in abundant supply, but meat is becoming scarce.

The only butcher stands open is that of a woman named Francisca. All her competitors closed three days ago because they had nothing to sell.

"I find the meat on the black market. There are people who do this for a living. I ask no questions. I buy the meat and that's it," she said.

In order to ease shortages in La Paz, the government has flown in 35 tons of meat from central Bolivia. Presidential chief of staff Jerjes Justiniano promised to send 25 tons of chicken over the next few days.