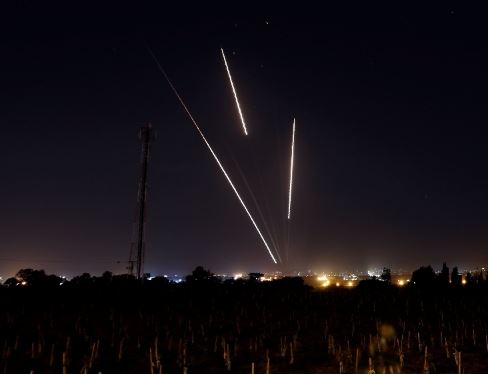 Streaks of light are pictured as rockets are launched from the Gaza Strip towards Israel, as seen from the Israeli side of the border, on March 25, 2019. (Photo: Xinhua)

GAZA, March 25 (Xinhua) -- The militant groups in Gaza fired on Monday night a barrage of rockets into southern Israel after the intensive Israeli airstrikes on military facilities and compounds in the enclave.

The announcement was made by the Joint military Chamber of Operations in Gaza, headed by Hamas, in an official emailed press statement.

"The joint military chamber of operations began to launch rockets on the settlements of Sdirot, Nativ Ha'asarah, Nir A'am in response to the ongoing aggression against our people," said the statement.

The Israeli cabinet earlier decided to strike military facilities and compounds that belong to Hamas and other militant groups in the Gaza Strip in response to an earlier rocket attack on central Israel that wounded seven Israelis.

During the Israeli airstrikes, the headquarters of Hamas chief Ismail Haniyeh was completely destroyed, in addition to two security buildings.

Palestinian President Mahmoud Abbas condemned the escalation of Israeli intensive airstrikes on the Gaza Strip, according to an official statement published by the official Palestinian News Agency (WAFA).

Abbas has been in intensive contacts with Egypt, Russia and the EU to contain the crisis and avoid more tension and wars in the Gaza Strip, the statement said.