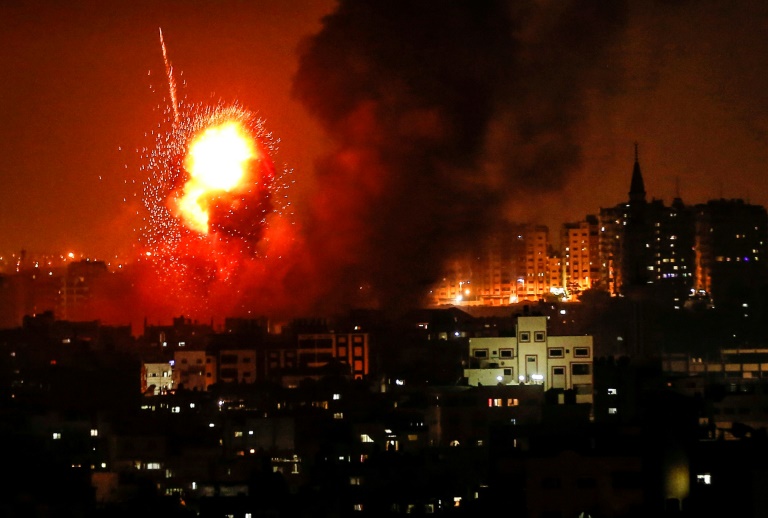 Gaza militants halted fire Thursday after targeting Israel with some 180 rockets and mortars, provoking Israeli strikes across the enclave that killed three Palestinians, including a toddler, in another severe flare-up of violence.

It was the third major escalation since July and came despite attempts by UN officials and Egypt to secure a long-term truce between Israel and Hamas, the Islamist movement that runs the Gaza Strip.

Two Palestinian officials said on condition of anonymity that Gaza militants halted rocket fire at noon on Thursday. One of the officials said "they consider this round of escalation over."

Beginning on Wednesday night and into Thursday, fireballs and explosions shook the Gaza Strip while plumes of smoke rose from the enclave.

In nearby Israeli communities, residents were sent scrambling to bomb shelters.

Most of the rockets fired by Palestinian militants landed in open areas, but at least two hit the Israeli town of Sderot near the Gaza Strip and sirens sounded throughout the night and into the morning.

Medics reported at least four wounded taken to Israeli hospitals, including a 30-year-old Thai woman in moderate to severe condition after being injured in the Eshkol region bordering the Gaza Strip.

Those killed in the Gaza Strip included Enas Khammash, 23, and her 18-month-old daughter Bayan, according to the health ministry in the Hamas-controlled enclave.

They were killed in an air strike in Jafarawi in central Gaza, the ministry said, while her husband was injured. The ministry said Khammash was also pregnant.

A Hamas militant was also killed in the strikes and at least 12 others injured, the health ministry said.

Before the Gazan decision to halt fire, rockets and mortars targeting Israel had continued sporadically on Thursday morning as had Israeli strikes in parts of the Gaza Strip.

"I rented this house to civilians and I'm surprised that this house was bombed," said Abdul al-Hakeem Abu Amra, the owner of the house where the woman and child were killed.

In Sderot, the Israeli city near the Gaza Strip, a gaping hole could be seen in front of a small, three-storey building. A car parked nearby was smashed.

"I will never leave, never," said Hagit Shetreet, 45, who had to run to a shelter due to the rocket fire.

Military spokesman Jonathan Conricus said he had no information on the woman and child being killed, but noted a pregnant Israeli woman was taken to hospital Wednesday night after a rocket landed nearby.

"What I can say is that we targeted by definition only military targets that were clearly used by Hamas where there was an active presence of Hamas and nothing else," he told journalists.

The military said Israel was targeted with around 180 rockets and mortars from late Wednesday into Thursday. Thirty of them were intercepted by air defence systems, according to the army.

A statement from the military wing of Hamas claimed responsibility for the rockets.

It said the Palestinian "resistance" had fired a large number of rockets at "enemy positions in the Gaza envelope".

The three flare-ups since July, which follow months of tensions due to protests and clashes along the Gaza border, have raised fears of a fourth war between the two sides since 2008.

Nickolay Mladenov, the UN envoy for the Middle East conflict who has been seeking to negotiate a long-term truce between Israel and Hamas, said he was "deeply alarmed."

"For months I have been warning that the humanitarian, security and political crisis in Gaza risks a devastating conflict that nobody wants," he said in a statement.

Israeli Prime Minister Benjamin Netanyahu was convening a meeting of his security cabinet.

The flare-up that began Wednesday night followed an incident the previous day.

In that incident, two fighters from Hamas's military wing were killed by Israeli fire along the border.

Israel initially said the two fighters were shooting at Israeli soldiers, but Hamas said they were involved in a training exercise that senior officials were attending.

Israeli media reported that army officials later acknowledged a mistake had been made and the militants had not been firing at soldiers, though the military would not confirm that information to AFP.

Hamas warned Israel it would pay for the attack, and on Wednesday the army said shots were fired at civilian engineers working on an underground barrier along the border, prompting the military to respond with tank fire.

That was followed by the rockets and then the Israeli strikes.

Protests and clashes along the Gaza border began on March 30 and peaked with the May 14 move of the US embassy for Israel to the disputed city of Jerusalem.

At least 165 Palestinians have killed by Israeli fire since March 30. One Israeli soldier has been shot dead by a Palestinian sniper.