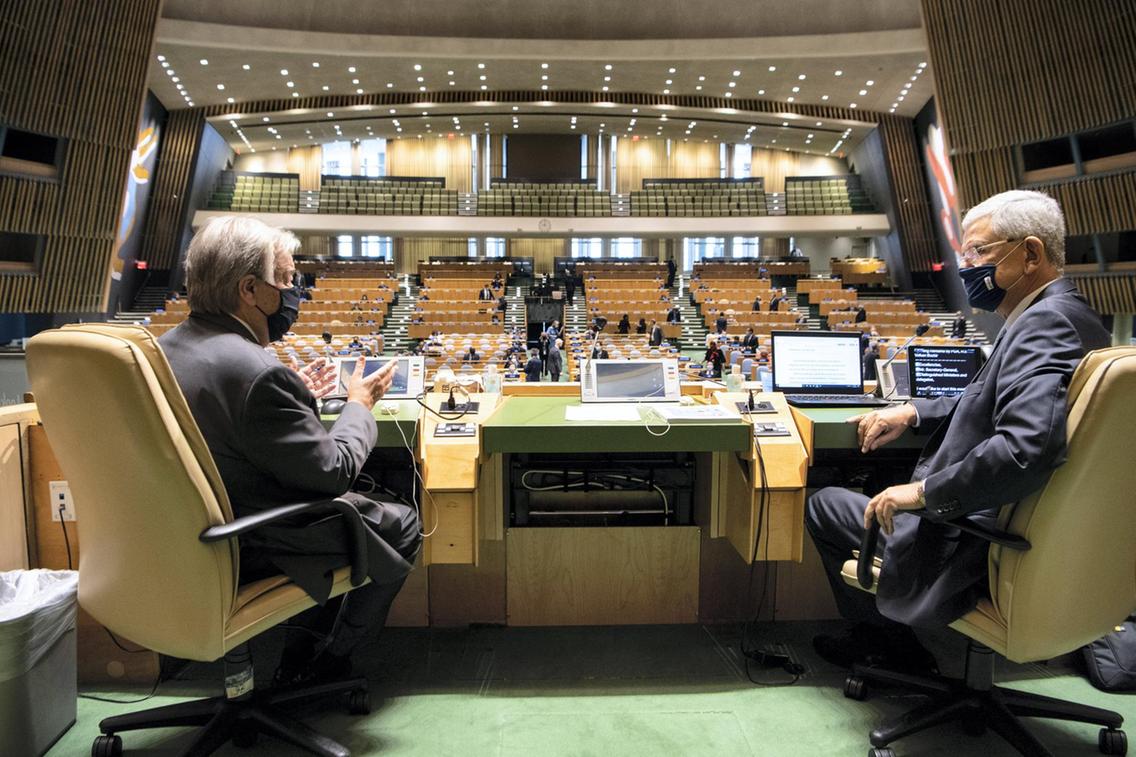 UNITED NATIONS, Sept. 22 (Xinhua) -- The General Debate of the 75th session of the UN General Assembly opened on Tuesday with the theme of "The future we want, the United Nations we need: reaffirming our collective commitment to multilateralism -- confronting COVID-19 through effective multilateral action."

Volkan Bozkir, president of the 75th session of the UN General Assembly, presided over the opening of the debate.

In his opening remarks, he called on world leaders to reaffirm multilateralism in face of the unprecedented challenge of COVID-19. He also called for the strengthening of UN agencies, including the World Health Organization.

"Rarely has the whole of humanity faced such an imminent and common threat. Today, we must leave our differences and disagreements aside. Today, we must renew our collective commitment to multilateralism. Today, we must combine our efforts to address this global problem and we must make sure that no one is left behind," he said.

Multilateralism is essential to fulfilling the core mandates of the United Nations prescribed in its Charter, said Bozkir. "To do that, we must continue to seek ways, in order to establish and consolidate trust and cohesion, among members, groups of countries and other stakeholders."

He warned that the world is seeing rising levels of mistrust and rivalry between major powers.

International institutions succeed when they manage to mediate such tensions. The United Nations was born with this in mind, he said. "It is in the interests of the world, our economies and our people that, these tensions are managed and do not spiral out of control. The forum provided by the UN is critical to reinforce cooperation and consensus."

Bozkir named multilateralism, the humanitarian agenda of the United Nations, the Sustainable Development Goals (SDGs), and gender equality as his priority in his one-year tenure, and called for support from member states.

"As we commemorate the UN's 75th anniversary, we must recommit to and strengthen multilateralism and acknowledge its achievements. The UN is the world's foremost forum to address issues that transcend national boundaries, maintain international peace and security, promote sustainable and inclusive development and protect human rights."

He promised to advance the UN humanitarian agenda, in view of the unprecedented level of humanitarian needs, which are caused by prolonged and new conflicts, as well as natural disasters around the world. "Our efforts must ensure that the most vulnerable are protected and able to live in dignity, as set out in the UN Charter."

The Sustainable Development Goals are the most transformative set of objectives, yet they cannot be achieved without strengthened global partnership, he said. "We must ensure that our efforts to recover from the pandemic are fully aligned with the implementation of the SDGs."

"As we recover from the pandemic, we must build back better, to improve the lives of women and girls. We must renew our commitment to protect women's rights and make women's participation in peace, security and humanitarian action meaningful and sustained."

As this General Assembly session marks the 75th anniversary of the founding of the United Nations, Bozkir called on member states to draw strength from the founders of the world organization, who demonstrated fortitude at a time of crisis.

"They chose to trust one another and unite in pursuit of a better world. Together, we have overcome adversity and challenges. Let us draw strength from those who have persevered in the past. When we have worked together, humanity has prevailed," he said. "This Assembly has the power to create a better world for all."

This year, world leaders are unable to travel to New York for the high-level week due to COVID-19. Instead, their pre-recorded statements are played in the General Assembly Hall. While the hall can hold some 2,500 people, only about 200 delegates are allowed to be physically present.

In his remarks, UN Secretary-General Antonio Guterres said, "In a world turned upside down, this General Assembly Hall is among the strangest sights of all. The COVID-19 pandemic has changed our annual meeting beyond recognition. But it has made it more important than ever."

He described COVID-19 as a "fifth horseman" that endangers humanity's common future besides the "four horsemen" -- the highest global geostrategic tensions in years, an existential climate crisis, deep and growing global mistrust, and the dark side of the digital world.

"We face simultaneously an epochal health crisis, the biggest economic calamity and job losses since the Great Depression, and dangerous new threats to human rights," he said.

Guterres called for unity of the member states.

"We cannot respond to this crisis by going back to what was or withdrawing into national shells. To overcome today's fragilities and challenges, we need more international cooperation, not less; strengthened multilateral institutions, not a retreat from them; better global governance, not a chaotic free-for-all."

"Today, we face our own 1945 moment. The pandemic is a crisis unlike any we have ever seen. But it is also the kind of crisis that we will see in different forms again and again. COVID-19 is not only a wake-up call, it is a dress rehearsal for the world of challenges to come," he said.

He asked member states to move forward with humility, unity and solidarity, and to be guided by science and tethered to reality.

"As we have seen, when countries go in their own direction, the virus goes in every direction," he said, adding that populism and nationalism have failed.

"In an interconnected world, it is high time to recognize a simple truth: solidarity is self-interest. If we fail to grasp that fact, everyone loses."