UNITED NATIONS, Sept. 29 (Xinhua) - The General Debate of the 75th session of the UN General Assembly (UNGA 75) on Tuesday lowered its curtain at the UN headquarters in New York on a positive note with the vast majority of world leaders and national representatives voicing strong support for multilateralism and the United Nations. 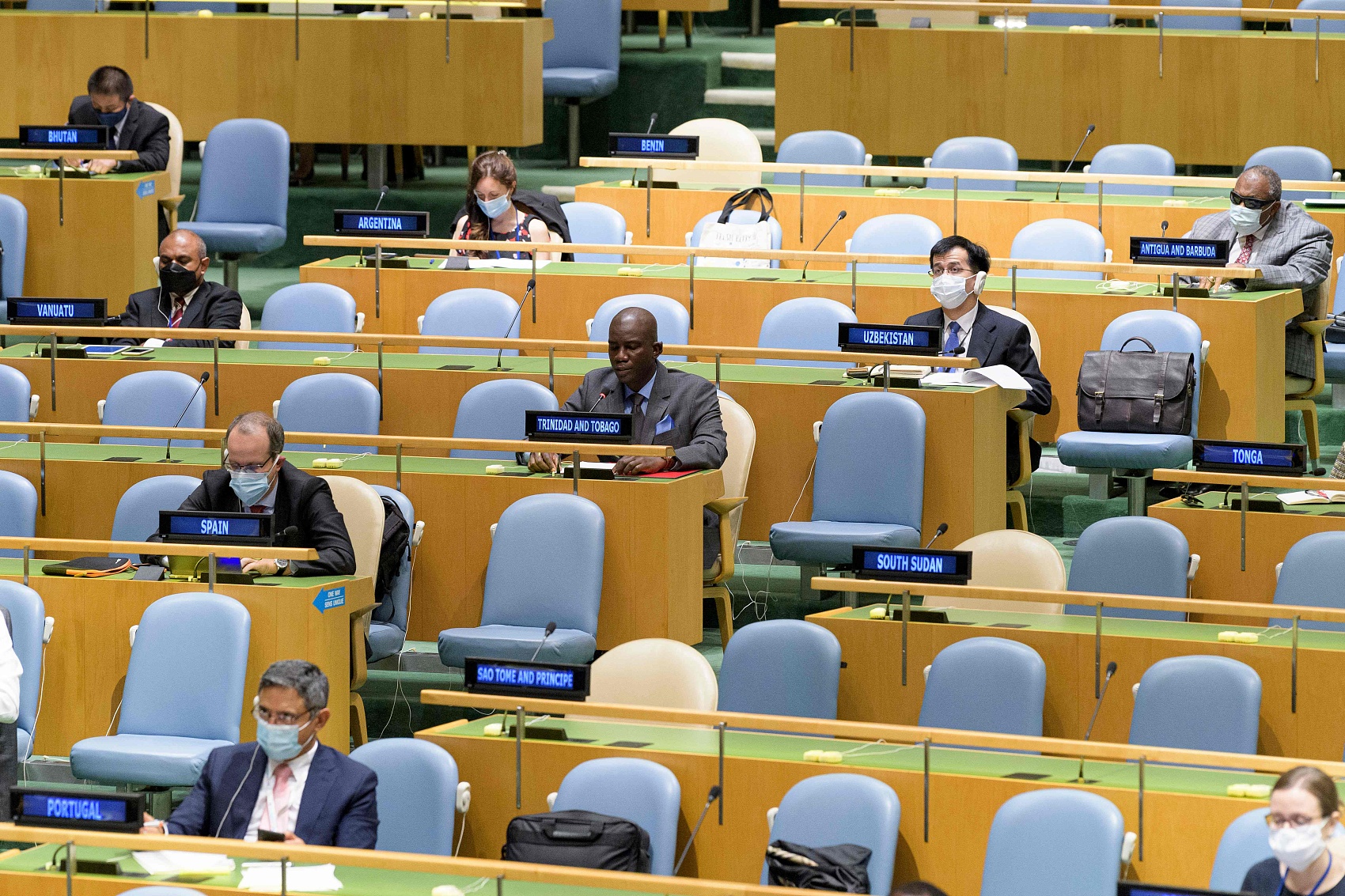 "Through their virtual presence, our political leaders have demonstrated their commitment to multilateralism and the United Nations. The vast majority confirmed this commitment in their speeches," Volkan Bozkir, president of the UNGA 75, told the closing ceremony of the virtual summit.

"Many recognized that multilateralism presents the most effective system to address global challenges, such as the (COVID-19) pandemic and climate change," said the UNGA president.

Noting that the meeting "has been substantive and exceptional" and for the first time in the history of the United Nations, global leaders were not able to be here in person, Bozkir stressed that "this did not prevent multilateralism from operating at the highest levels."

"Heads of States, Heads of Governments and Ministers laid down a complete agenda, which not only supports the priorities I laid down, but also provided enhanced guidance, on steps needed to overcome the challenges we face," he said. "The added feature of introductory remarks by Permanent Representatives was pioneering and maintained the spirit of the occasion."

"While sovereign countries can undertake actions as they deemed fit, leaders were clear that solutions, in an interdependent and interconnected world, can only come from multilateral actions, with UN at its center," he said.

The UNGA president expressed the hope that in the coming year and months ahead, he will "strongly rely on" the member states and their leaders to support him in this regard.

"I urge you to stay positive and look at the bigger picture," said Bozkir. "One thing is clear: 'We are stronger together.'"

"Our global consultation around UN75 revealed that this is precisely what people around the world want," he said.

Speaking about COVID-19, Bozkir said that "the call for solidarity is impossible to ignore in the context of the current pandemic."

"Every member state referred to the catastrophic consequences of this disease in their remarks. There was clear recognition that a disease that ignores global borders requires a solution that delivers for us all. And that we all experienced challenges arising from the pandemic," said the UNGA president.

"Unilateral actions have failed to halt its spread," he noted.

Talking about the "three issues" which he will address through his presidency, Bozkir listed them in order: "Firstly, early warning system: creating conditions to prevent emergence of another disease; Secondly, inclusivity in approaches to dealing with the crisis; And thirdly, equity in access to future vaccines."

"At the Special Session of the United Nations General Assembly on the pandemic later this year, I encourage you to present policy solutions on these three issues, to strengthen cooperation and put the world back on track towards achieving the SDGs (Sustainable Development Goals)," the UNGA president said. "I wholeheartedly endorse the call for vaccines to be distributed equitably, not just from a practical perspective, but also from a moral standpoint."

Turning to recovery from the pandemic, Bozkir said that COVID-19 is a practice test that "has revealed our weaknesses and the areas that we must strengthen together."

"I was pleased to hear so many member states recognize the opportunity 'to build back better' so we are better prepared for future crisis," he said. "We all know that we must build resilience now to prepare for whatever comes tomorrow. And we know that we have a road map to achieve this: The 2030 Agenda."

"So, I welcome the overwhelming support leaders have shown for the Sustainable Development Goals and the Decade of Action as the best way to end poverty, rescue the planet and build a more peaceful world," said the UNGA president.

Referring to climate change and action, Bozkir said that "many of you are taking steps to present enhanced Nationally Determined Contributions ahead of COP26 (UN Climate Change Conference in Glasgow) next year, which I warmly welcome. But I encourage others to follow and enhance efforts towards COP26 in Glasgow."

"The pandemic has diverted resources and attention. But climate change is still the greatest long-term threat to humanity. As fires rage, sea-levels rise, and biodiversity is lost, there is even greater urgency in pursuing our climate goals and integrating them in our plans 'to build back better from the pandemic,'" underscored the UNGA president.

"I will work closely with you to make COP26 a landmark in our mutual quest to combat the climate challenge," he said. "I also look forward to discussing the importance of biodiversity, particularly with respect to disease, at the first ever UN Biodiversity Summit tomorrow."

As for international peace and security, Bozkir said that the speakers' concerns "are well founded given the devastating consequences of various conflicts around the world."

"The pandemic has only aggravated this situation. As the representative of membership as a whole, and within my mandate, I intend to regularly follow up with the Security Council and the secretary-general of the urgency that you have outlined," he said.

"Seventy-five years on from the founding of this organization, conflicts still rage around the world and many protracted crises remain unresolved. We can find practical solutions, if we join efforts, to prevent instability and achieve sustainable peace," said the UNGA president.

Referring to the ceasefire call that the UN chief made in March, Bozkir said that "now is the time for implementation."

"Please consider the day to day implications of these devastating conflicts, on ordinary civilians, including some of the most vulnerable groups, such as women and displaced persons," he said.

On nuclear proliferation, he said it was "a key concern," adding that he welcomes steps toward nuclear disarmament, including support for the Joint Comprehensive Plan of Action.

"I welcome member states' continued commitment to Nuclear-Weapons-Free Zones and ratification and implementation of disarmament and non-proliferation treaties," he said.

"Peace is more than an absence of war, but I was encouraged to hear strong commitment to disarmament, a crucial tool in conflict prevention, alongside preventative diplomacy," the UNGA president noted, adding, "I also recognize that achieving consensus on these issues is difficult. Strenuous efforts are needed to overcome divides. I am ready to work with you, the Security Council and the secretary-general, to help remove the gaps and improve trust."

"I look forward to discussing this further during the high-level plenary meeting to commemorate and promote the International Day for the Total Elimination of Nuclear Weapons on Oct. 2, this Friday," he said.

After concluding his remarks about the challenges, which he said are enormous, Bozkir said that "the possibilities of solutions" are enormous as well.

"By working together, we can overcome them. We must be as inclusive as possible in our deliberations," he said.

"The United Nations has yet to achieve gender equality. We cannot be complacent. I count on your support on Oct. 1, as we mark the 25th anniversary of the Fourth World Conference on Women," said Bozkir.

The UNGA president said that throughout his term, he "will endeavor to involve civil society in a meaningful way for a diverse range of voices to be heard."