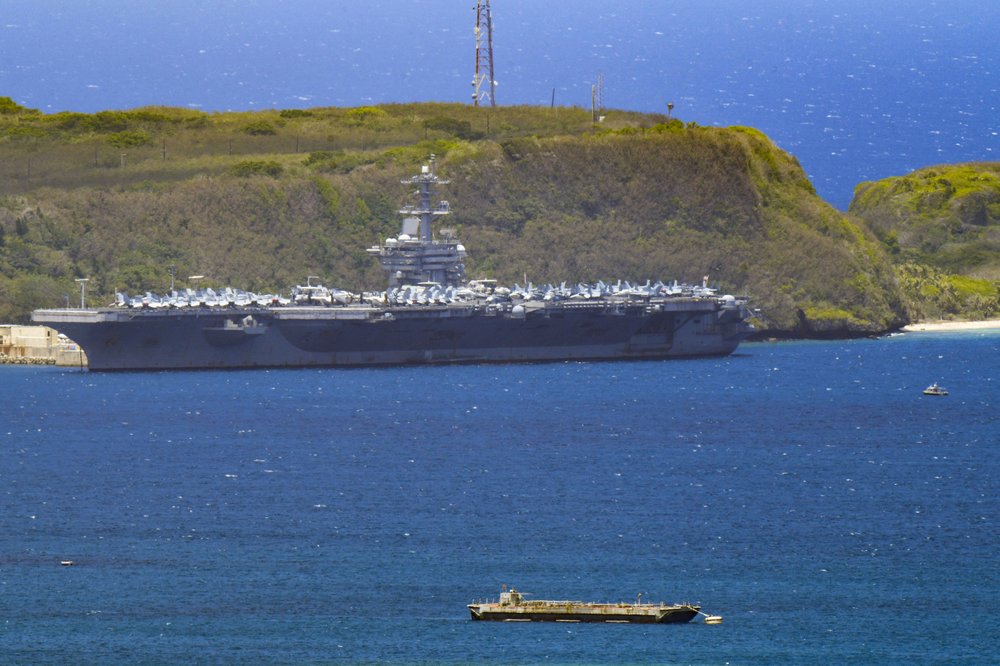 Pentagon leaders anticipate that the coronavirus may strike more Navy ships at sea after an outbreak aboard an aircraft carrier in the Pacific infected more than 400 sailors, a top general said Thursday.

Gen. John Hyten, vice chairman of the Joint Chiefs of Staff, said one member of the crew of the USS Theodore Roosevelt was hospitalized Thursday in intensive care on Guam, where the carrier has been docked for more than a week. He said 416 crew members are now infected and that 1,164 test results are pending.

“It’s not a good idea to think that the Teddy Roosevelt is a one-of-a-kind issue,” Hyten told a Pentagon news conference. “We have too many ships at sea. ... To think that it will never happen again is not a good way to plan.”

The Navy’s top officer, meanwhile, said the biggest problem is the inability to test enough people quickly, including those aboard the USS Nimitz, the next U.S.-based aircraft carrier due to deploy out to sea.

“The challenge that we have now, is having that type of capability where we can test in volume and at speed,” Adm. Mike Gilday told a small number of reporters Thursday. “I really don’t have a good estimate right now on when that testing capability might be available in the kinds of quantities we would like to see.”

He said sailors on the USS Nimitz, which is in port preparing for a deployment, will have all movement restricted for two weeks before the ship leaves.

One sailor was taken off the Nimitz more than a week ago after showing symptoms, but the test was not conclusive, the Navy said. Hyten suggested a small number of sailors were ill, but the Navy said Thursday that no sailors currently on the carrier have tested positive for COVID-19 or are showing symptoms.

A retired Navy admiral and former top NATO commander in Europe, James Stavridis, said he sees more trouble ahead, and not just for the Navy.

“Clearly there are more cases to come. The most recent tally on Roosevelt alone is well over 400,” Stavridis said via email. “The Navy and all the services have some hard choices ahead in terms of whether to pull units off the line to get them well or accept some level of casualties due to the coronavirus. I think it will be a case-by-case approach depending on the mission of the unit.”

Gilday said the Navy has learned from the outbreak on the Roosevelt, including how to move from preventing the virus to containing it when sailors begin showing symptoms.

As of Thursday, 3,190 have tested negative, and results from tests on the rest of the crew are pending. About 2,700 crew members have been taken off the ship and are lodged on the base and in hotels on the island, which is a U.S. territory. Those who have tested positive are being checked by medics twice a day.

More broadly, Hyten said the outbreak aboard the Roosevelt is an illustration that the military has to adapt.

“This will be a new way of doing business that we have to focus in on,” he said, referring to the challenge of recruiting, training, deploying and potentially conducting combat amid the pandemic. “We’re adjusting to that new world as we speak today.”

The outbreak aboard the Roosevelt began in late March and has thrust the Navy into a leadership crisis. Thomas Modly, who resigned Tuesday as acting Navy secretary, had fired the commander of the Roosevelt, Capt. Brett E. Crozier, for having widely distributed a letter urging faster action by the Navy to save his sailors.

Modly came under fire for flying out to the Roosevelt last weekend and making remarks to the crew that were harshly critical of Crozier.

Gilday said the investigation of the Roosevelt matter, which he ordered last week, is now complete and he has started to go through the report. He said he has not ruled out any options, including possibly reinstating Crozier, if that’s where the investigation leads.

The key question, he said, is why Crozier felt compelled to send the memo, and whether it signaled a breakdown in communications with leadership.

“I am taking no options off the table,” he said when asked about Crozier’s fate. He said hasn’t spoken to Crozier. He said he has gotten no pressure from anyone about the investigation and just wants to make sure his actions are fair.

Later, in a separate appearance, Gen. Mark Milley, chairman of the Joint Chiefs, said that despite the outbreak aboard the Roosevelt, it could be put back to sea and returned to duty relatively quickly if required by world events.

Speaking along with Hyten at the Pentagon, David Norquist, the deputy secretary of defense, told reporters the defense leaders realize the coronavirus is not going to be a short-term problem in the military.

“We’re going to need to change and adapt because even over the coming months, the virus isn’t going to go away,” Norquist said. “We’re going to have to be able to operate in a COVID environment.”