Argentina ground to a halt Monday as public service unions blocked road, rail and air transport with a nationwide 24-hour strike in protest at the government's latest deal with the International Monetary Fund. 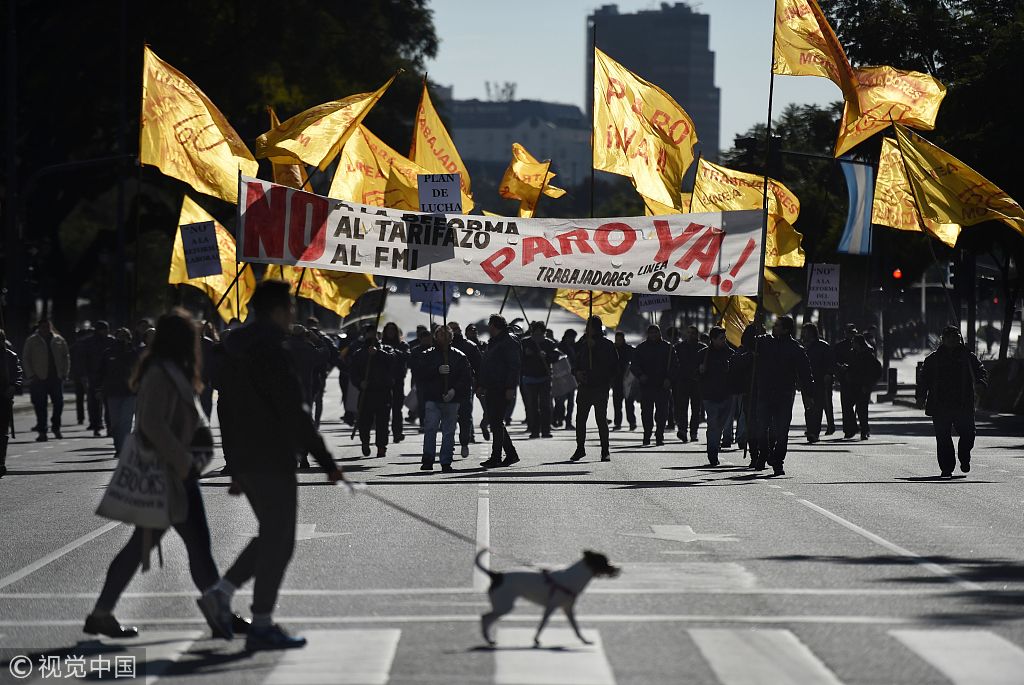 Demonstratos march along 9 de Julio avenue in Buenos Aires on June 25, 2018, during a 24-hour general strike called by Argentina's unions in protest of the government's deal with the International Monetary Fund. (Photo: VCG)

In a massive show of force against the center-right government of President Mauricio Macri, organizers said at least one million workers were taking part in the industrial action which halted trains, subways, buses and flights in Latin America's third-largest economy.

"The strike had a very high level of compliance throughout the country," Juan Carlos Schmid, leader of the General Confederation of Workers (CGT), told a news conference.

Banks and schools remained shut and Buenos Aires slowly emptied of traffic as the day progressed.

"These stoppages don't help at all, they don't add anything, and I don't think that there has been a government in decades that cared as much about employment and the workers and creating new opportunities," said Macri, a former mayor of the capital.

Although the CGT called only for a strike, more radical groups organized demonstrations that cut off access to Buenos Aires.

From 7:00 am (1000 GMT), activists began to close off the main routes into the capital where hundreds of federal law enforcement personnel were deployed.

"The strike is against the economic program ... The IMF has always brought hardship to the Argentines," Schmid told AFP earlier, calling the strike "the biggest in eight years."

The unions are demanding that salary negotiations for this year be reopened in order to align them with projected inflation, calculated at 27 percent by the central bank and which could rise to 30 percent by year's end.

Negotiations mostly took place at the start of the year, when the annual inflation target was 15 percent -- a goal which had been abandoned by May.

In the interest of maintaining dialogue with the unions, labor minister Jorge Triaca said his office was in favor of such negotiations.

Following a currency crisis in April and May, in which the peso shed roughly 30 percent of its value, the IMF announced a $50 billion standby loan for Argentina in early June after Macri sought help to bolster market confidence.

Argentina has a bitter history with the global crisis lender, which many Argentines view as having imposed tough conditions that worsened economic pain 17 years ago.

As the strike gripped Buenos Aires Monday, only a few cars could be seen on the city streets, which were quieter than on a Sunday.

"A general strike isn't enough. We need a battle plan to counter this war plan against the workers," Marcelo Ramal, a leader of the Workers Party, said at one of the roadblocks.

The finance ministry estimated the strike would cost Argentina's economy one billion dollars.

"The government is in a tough spot, it is at its very lowest point (in polls) and is strongly criticized by workers" whose wages are losing value against the high rate of inflation, said political analyst Diego Reynoso.

Macri, a free-market businessman who once ran one of the country's top soccer clubs, scrapped many subsidies his predecessors had granted on a variety of services, most notably electricity, gas and water.

The rise in the cost of utilities, as well as in public transport, further eroded the spending power of Argentines.

The government's deal with the IMF aims to balance the budget by 2020.