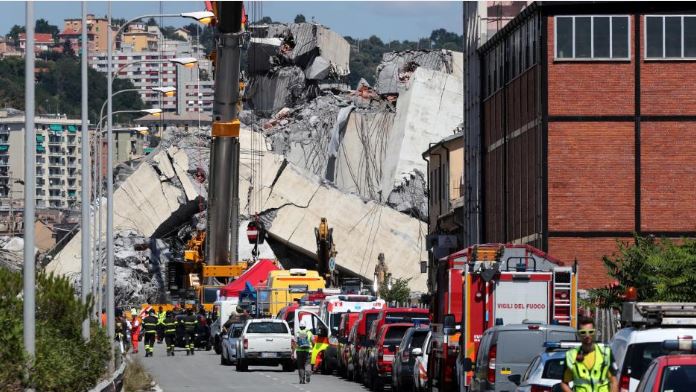 Four more bodies from the Morandi Bridge collapse in the northwest Italian city of Genoa were pulled out from the rubble on Saturday.

They include a family of three, including a nine-year-old girl, found in their car and another body rescuers describe as a 30-year-old man believed to be the last missing person, bringing the death toll to 43.

Some are still in the hospital.

The news came during a state funeral for 19 of the other victims, including two Albanians and one French national who was in Italy on holiday with his friends.

The ceremony was officiated by Genoa's Archbishop Angelo Bagnasco and attended by around 3,000 people, including the country's president and prime minister.

Family members of other victims refused to take part in the public ceremony, preferring a more private funeral in protest of a government they partially blame for failing to give the country's ailing infrastructure the financial attention it needed.

In 2006, Italy spent $16 billion on its roads and highways. However, that figure has dropped dramatically following the global economic crisis. Expenditures have since increased, but according to Italy's transport minister Danilo Toninelli, this disaster sheds light on the dilapidation of Italy's transport infrastructure.

The current coalition government, elected earlier this year, points the finger at the private company contracted to maintain the tolled highway and bridge, Autostrade Per L'Italia.

Deputy Prime Minister Luigi DiMayo said, "It's not possible that someone pays a toll to die," accusing Autostrade of pocketing profits meant for maintenance.

The government has threatened to revoke the company's contract and fine it 150 million euros.

Autostrade rejects the allegations, saying it had performed regular safety checks and maintenance on the bridge and that it was safe.

CEO Giovanni Castellucci said that the company would do "whatever we can to help justice to go fast and deep." Autostrade also promised 500 million euros for reconstruction and compensation to those directly affected.

The transport and infrastructure commission looking into the cause of the collapse has said a broken cable rod may be to blame for the bridge coming down.

Italian President Sergio Mattarella has called the accident an "absurd catastrophe" and has called a 12-month state of emergency.

More than 600 people living near the bridge have been evacuated over fears the remaining stretch of the bridge could collapse.

Most are staying at hotels, with friends and at a municipal sports center.

"My daughter started crying," one said. "She went outside and the bridge was gone. There was so much dust, there was noise and then ambulances and helicopters -- there was a huge noise everywhere. It has been a very hard day. It will be an image that I will carry my whole life, impossible to forget."

Vanda Natalina, 72, had been living near the bridge since she was 5 years old.

"They built this bridge when I was 16," she recalls. "Now I'm constantly living with the fear that the building where my apartment is will be destroyed."

She has reason to be concerned. According to Marco Bucci, the mayor of Genoa, the bridge will be completely rebuilt, along with new transport links across the city. Everyone displaced by this tragedy will be given new apartments close by.

According to the mayor, the central government has already given Genoa five million euros to help with the reconstruction.

Last Tuesday, a 200-meter stretch of the Morandi Bridge came crashing down, bringing with it scores of cars and trucks.

Its design was considered innovative when it first opened in 1967, but current traffic flows exceed its original engineering.

A criminal investigation is ongoing as everyone asks how one of Europe's most critical transit routes, linking Italy's Rivera with Southern France, could simply collapse.