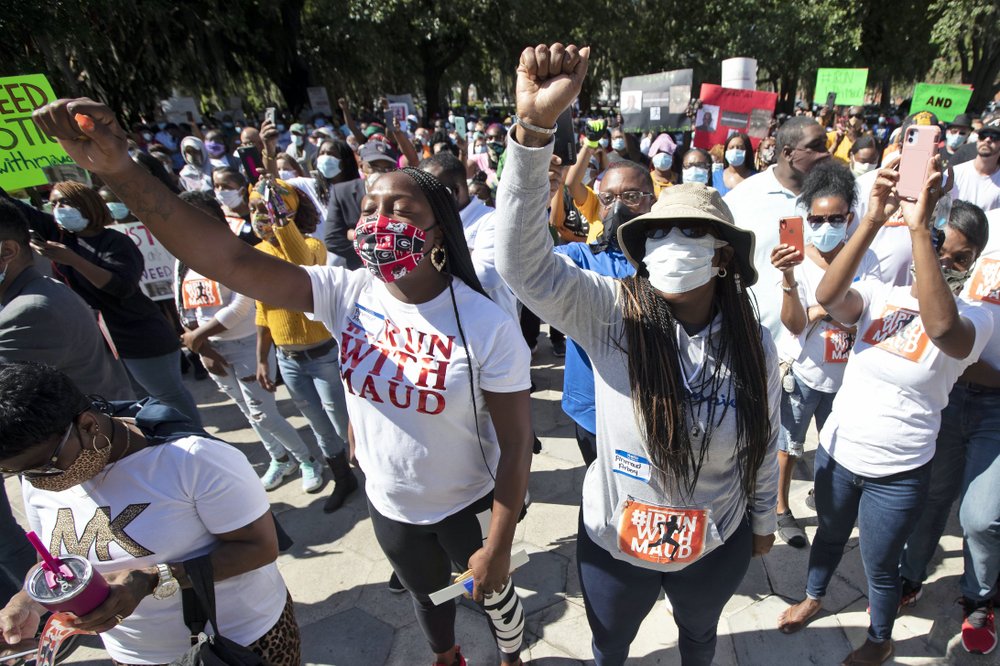 People react during a rally to protest the shooting of Ahmaud Arbery, an unarmed black man, Friday, May 8, 2020, in Brunswick Ga. (Photo: AP)

Many people saw more than the last moments of Ahmaud Arbery’s life when a video emerged this week of white men armed with guns confronting the black man, a struggle with punches thrown, three shots fired and Arbery collapsing dead.

The Feb. 23 shooting in coastal Georgia is drawing comparisons to a much darker period of US history — when extrajudicial killings of black people, almost exclusively at the hands of white male vigilantes, inflicted racial terror on African Americans. It frequently happened with law enforcement complicity or feigned ignorance.

The footage of Arbery’s death was not the only thing that rattled the nation’s conscience. It took more than two months for his pursuers — who told police they suspected he was a burglar — to be arrested and taken into custody. That is fueling calls for the resignation of local authorities who initially investigated the case and reforms of Georgia’s criminal justice system.

“The modern-day lynching of Mr. Arbery is yet another reminder of the vile and wicked racism that persists in parts of our country,” said the Rev. James Woodall, state president of the Georgia NAACP. “The slothfulness and inaction of the judicial system, in this case, is a gross testament to the blatant white racial privileges that permeates throughout our country and our institutions.”

The case appeared frozen as it was handled by police in the small city of Brunswick.

After the video emerged on social media this week, the Georgia Bureau of Investigation took one day after launching its probe Wednesday to arrest Gregory McMichael, 64, and his son, Travis McMichael, 34. They are jailed on murder and aggravated assault charges and did not have lawyers as of Friday who could comment on their behalf.

Several hundred people crowded outside the Glynn County Courthouse on Friday to mark what would have been Arbery’s 26th birthday, with many saying it’s too soon to celebrate because the case must still go before a grand jury that will decide whether to indict the McMichaels.

Arbery’s killing reminds some of Emmett Till, a black teen from Chicago who was kidnapped in 1955 in Mississippi, lynched and dumped in a river after he was falsely accused of whistling at a white woman. An all-white jury acquitted the white men accused of killing Till, who was 14. His death helped fuel the civil rights movement and brought about the eventual passage of federal civil rights protections.

During Friday’s protest, demonstrator Anthony Johnson said he sees echoes of Till and others. Arbery “died because he was black like the rest of them did. For no reason,” Johnson said.

Arbery’s mother, Wanda Cooper Jones, has said she thinks her son, a former high school football player, was jogging for exercise before he was killed.

Gregory and Travis McMichael told police they suspected Arbery was the same man recorded by a security camera committing a break-in. When they saw Arbery running on a Sunday afternoon, the McMichaels grabbed guns, got into a pickup truck and pursued him.

Video footage shows a runner grappling with a man armed with a shotgun. Shots are fired and the runner staggers and falls. A Georgia Bureau of Investigation statement said the McMichaels confronted Arbery with two firearms and that Travis McMichael fatally shot Arbery.

Arbery’s death has drawn sharp reactions and expressions of sadness across the US. A Change.org petition calling for justice hit over 700,000 signatures on Friday, President Donald Trump called the video “very disturbing” and presumptive Democratic presidential nominee Joe Biden said it was like seeing Arbery “lynched before our very eyes.”

The Players Coalition, a racial justice group made up of professional athletes, sent a letter Friday to the FBI and prosecutors requesting a federal investigation into Arbery’s death.

“The absence of justice is ever-present,” said Malcolm Jenkins, a safety for the New Orleans Saints and the foundation’s co-founder. “Another black life has been taken by a bullet and the slaying justified by white fear.”

Others joined demands from Arbery’s family for the resignations of local law enforcement authorities. Before the case was turned over to special prosecutor Tom Durden, Glynn County District Attorney Jackie Johnson and Ware County District Attorney George Barnhill recused themselves because of their connections to the McMichaels. Gregory McMichael was an investigator for Johnson’s office before retiring last year and before that served as a local police officer.

Johnson and Barnhill “must be held accountable for their shameless dereliction of duty,” said Vanita Gupta, president and CEO of The Leadership Conference on Civil and Human Rights and a former head of the Department of Justice’s Civil Rights Division during President Barack Obama’s administration. She also called on the Justice Department to investigate Arbery’s killing under the federal hate crimes statute.

While likening Arbery’s death to a lynching may seem like an apt comparison, doing so isn’t sufficient for understanding why the man’s death is a tragedy, said Bryan Stevenson, executive director of the Alabama-based Equal Justice Initiative. The organization has cataloged more than 4,400 racial terror lynchings in the US that took place between Reconstruction and World War II.

“Law enforcement did nothing about lynchings for a century,” Stevenson said. “It should be a national priority to eliminate this kind of racial terror so that we do more, not less when someone like Ahmaud Arbery is killed in this manner.”

He added: “Our nation continues to underestimate the painful burden that has been placed on black people and the traumatic injury we continue to aggravate when our justice system refuses to hold accountable perpetrators of unnecessary violence if they are white and invoke some public safety defense.”

The shooting of Arbery has also been compared to the 2012 case of Trayvon Martin, the unarmed black Florida teenager shot and killed by a neighborhood watch volunteer.

The shooter, George Zimmerman, who is white and Hispanic, suspected without evidence that Martin was casing the area for burglaries. Zimmerman was not charged initially after claiming self-defense under Florida’s “stand your ground” law, which provides immunity to people who use lethal force out of fear for their lives.

Phillip Agnew, an organizer with the Movement for Black Lives, said vigilantism involving black victims has been “driven by hate, resentment and generations-old racial anxiety.”

“We need to make people afraid to do something like this to other people,” Agnew added. “And until we do that, this is going to continue to happen.”