WORLD Georgia runoff for US Senate seat is also tight

Georgia runoff for US Senate seat is also tight 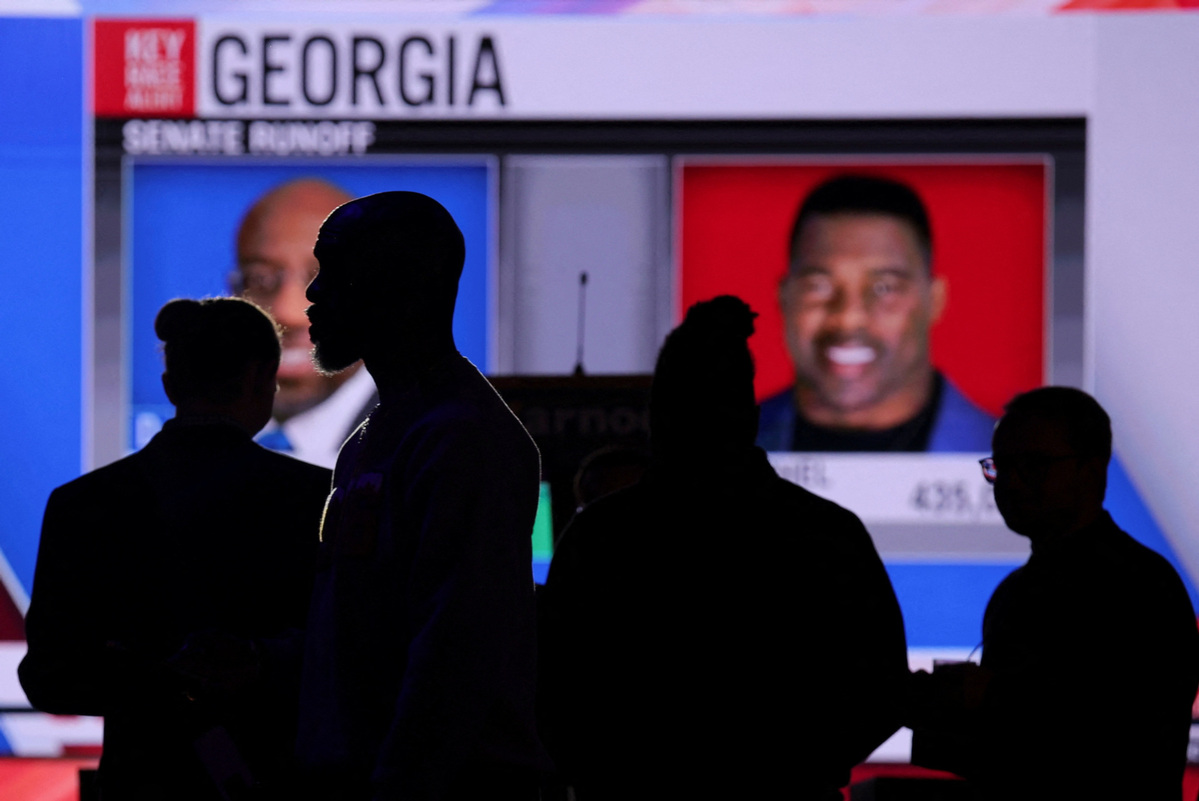 Supporters of US Senator Raphael Warnock (D-GA) react during an election night party after polls closed for the US midterm runoff elections between Warnock and his Republican challenger Herschel Walker in Atlanta, Georgia, US, Dec 6, 2022. [Photo: Agencies]

Voters in Georgia turned out on Tuesday in a close contest to decide the US' final Senate seat in a runoff between Democratic Senator Raphael Warnock and Republican football icon Herschel Walker.

More than 1.8 million Georgians had voted as of Friday, with about 300,000 voting early each day last week — setting records for the largest single-day early-voting turnout in state history. Early voting for the runoff ended on Friday.

Most polls had shown Warnock with a small lead over Walker.

In the November election, Warnock led Walker by about 37,000 votes out of almost 4 million but fell shy of a majority, triggering the four-week runoff.

The runoff concluded a bitter fight between Warnock, 53, the state's first black senator, and Walker, 60, a black former University of Georgia football star who has campaigned with the support of former president Donald Trump, though Trump hasn't been in Georgia during the runoff.

While Democrats will control the Senate next year regardless of Tuesday's outcome, if Warnock wins the 51-seat majority, it gives Senate Democrats control of committees and frees them from depending on Vice-President Kamala Harris to cast tiebreaking votes.

The Justice Department said Tuesday that it was sending federal election monitors to voting sites in four Georgia counties. The department using federal monitors at election sites traces back to the 1965 passage of the Voting Rights Act. The monitors include personnel from the department's civil rights division and from its US attorneys' offices.

Walker's campaign had been plagued by his meandering campaign speeches and damaging allegations, including claims that he paid for two former girlfriends' abortions — accusations that Walker has denied.

Walker said Warnock is a yes man for President Joe Biden, accusing him of "being on his knees, begging" at the White House.

Walker campaigned Monday with his wife, Julie. "I love y'all, and we're gonna win this election," he said at a winery, comparing the election to his athletic success. "I love winning championships."

Walker also was forced to acknowledge during the campaign that he had fathered three children out of wedlock whom he had never before spoken about publicly — in conflict with his yearslong criticism of absentee fathers and his calls for black men in particular to play an active role in their children's lives.

He has suggested that he has worked as a law enforcement officer and said he graduated college, though he has done neither.

Warnock's campaign has spent about $170 million on the campaign, outpacing Walker's nearly $60 million, according to their latest federal disclosures. Democratic and Republican party committees, along with other political action committees, have spent even more.