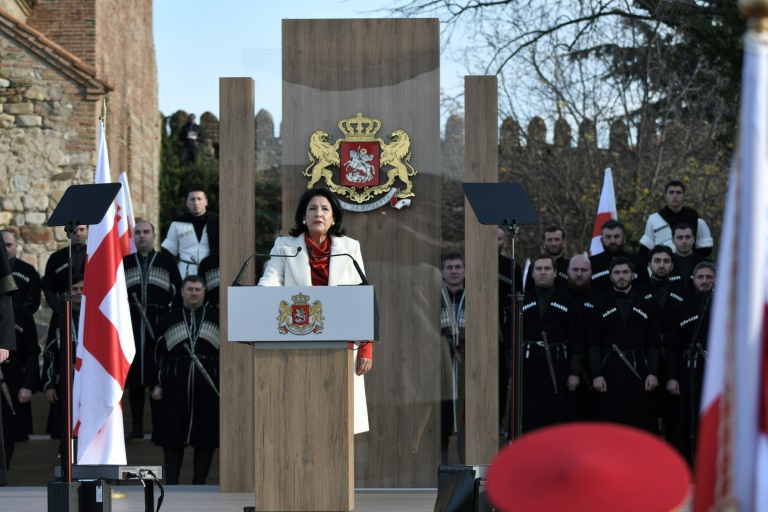 Georgia on Sunday swore in its first female president, Salome Zurabishvili as opposition parties continue to denounce her election as fraudulent and demand snap parliamentary polls.

The inauguration paved the way for a new constitution to come into force, transforming the country into a parliamentary republic with a largely ceremonial president.

The event was held in the mediaeval town of Telavi in Georgia's eastern winemaking region of Kakheti.

French-born Zurabishvili, 66, took the oath of office in the courtyard of an 18th-century manor that belonged to Georgia's penultimate king Heraclius II.

"The goal of my presidency is to make Georgia's democratic development and its path towards Europe irreversible," she said in an inaugural speech.

"I will facilitate this process with the support of our strategic partner, the United States of America, and our European friends," she said.

Opposition parties have refused to recognise Zurabishvili's election last month and tried to hold a protest rally outside the royal residence.

Pro-opposition Rustavi-2 TV channel reported that clashes briefly erupted between police officers and protesters as they tried to break through police ranks.But the plan was thwarted by police, who on Sunday morning blocked a kilometres-long opposition motorcade on a road leading from the capital Tbilisi to Telavi.

"Georgian Dream has taken away our constitution, our state institutions, our freedom of expression," defeated candidate Grigol Vashadze told journalists after a failed attempt to stage a protest in Telavi.

Zurabishvili was backed in the election by the ruling Georgian Dream party of Georgia's ex-premier and billionaire tycoon Bidzina Ivanishvili.

Ivanishvili, Georgia's richest man, stepped down as prime minister in 2013 after just a year in office but is still widely believed to be Georgia's de facto ruler. His critics accuse him of "state capture" as his loyalists hold key cabinet posts.

Former French diplomat Zurabishvili has said her election was a step forward for women and a move closer to Europe.

But opposition parties have refused to accept the result, pointing to instances of alleged vote-buying, multiple voting, voter intimidation, and ballot-stuffing in the November 28 election.

On December 2, thousands of opposition supporters took to the streets in Tbilisi against the election result, demanding snap parliamentary polls.

Georgia's leading rights groups denounced the electoral irregularities, which the US State Department said were "not consistent with the country's commitment to fully fair and transparent elections."

Observers from the Organisation for Security and Cooperation in Europe said that while the election was "competitive" and candidates campaigned freely, it was concerned over "the misuse of state resources" by the ruling party.

In what critics derided as "vote-buying" ahead of the election, Ivanishvili promised the government would drastically increase social spending and pledged to spend his own money to write off the bank loans of more than 600,000 people.

Zurabishvili was born in France to a Georgian family who fled the Bolshevik regime to Paris in 1921.

She studied international relations at the prestigious Paris Institute of Political Sciences before a 30-year career as a French diplomat, with postings to the United Nations, Washington and Chad.

Her career in French diplomacy culminated in a posting to Tbilisi, where then-president Saakashvili appointed her as foreign minister.

But Zurabishvili quickly made enemies in the ranks of the parliamentary majority, with MPs and a number of senior diplomats publicly accusing her of arrogance.

She was sacked in 2005 after a year on the job, though thousands took to the streets of the capital to protest her dismissal.

She then joined the opposition as a member of parliament and became one of Saakashvili's fiercest critics.

In her book "A Woman for Two Countries", published in France after her firing, she wrote: "Now, I have to engage in a political battle, which has never attracted me, which I never practised, which is being imposed on me."

Zurabishvili will be Georgia's last directly elected president as the country transitions to a parliamentary form of governance following a controversial constitutional reform.

The Caucasus country's next president will be elected in 2024 by a 300-member electoral college.

Adopted in September 2017, the constitutional change was protested by all opposition parties which denounced it as favouring the ruling party.