The eastern German city of Dessau marked the 100th anniversary of the Bauhaus school of design Sunday with the opening of a new museum featuring a collection of exhibits and objects that tie in with the movement's iconic buildings. 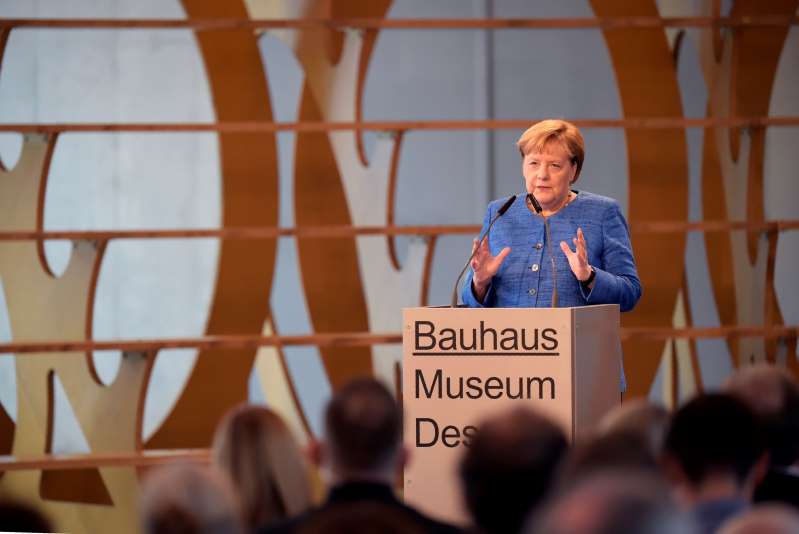 German Chancellor Angela Merkel speaks during the official opening of the new Bauhaus Museum, built for the centenary of the founding of the Bauhaus, in Dessau, Germany Sunday, Sept. 8, 2019. (Photo: AP)

Chancellor Angela Merkel told a crowd at the opening of the Bauhaus Museum Dessau the school featured an avant-garde style that "we still really enjoy today."

The city was the school's second home after it moved from Weimar, and the new museum building was designed by Barcelona's addenda architects to interface with the city and nature.

Described as a "soaring concrete block enveloped in glass" in the heart of Dessau, "depending on the light, the surroundings are reflected more or less strongly in the glass facade or enable views through the building," the museum said.

The opening exhibition tells the story of the famous school in Dessau, featuring more than 1,000 exhibits.

Rather than focusing on iconic designs and masters, the museum said the emphasis instead is the school and the students: "the daily reality of learning and teaching between the poles of creative design and industrial prototype production, artistic experiment and economic pressure, educational institution and emancipatory aspiration."

Bauhaus was founded in Weimar in 1919 under architect Walter Gropius as Germany grappled with its political future after World War I.

Weimar opened its own new museum earlier this year, showcasing many of the school's items that blurred the lines between the artistic and the industrial.

"In Bauhaus not only tradesmen and artists worked closely together, but also many women put a strong stamp on Bauhaus style," Merkel noted in her weekly video podcast this week.

Once the Bauhaus school fell afoul of right-leaning local authorities in Weimar, who had long been suspicious of its unconventional students and teachers, its funding was slashed in 1925.

That forced it to move northeast to Dessau, where the iconic glass-fronted Bauhaus headquarters and a residential estate with 90 apartments were built.

Dessau's Nazi-dominated council forced the Bauhaus to close in 1932, and an attempt to keep it going in Berlin lasted only a few months.