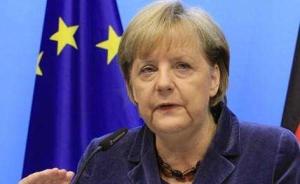 At a press conference after a close-door meeting with Georgian Prime Minister Mamuka Bakhtadze, Merkel said Georgia is a very important partner in the context of the Eastern Partnership and Germany will always support Georgia.

"Georgia is a very important partner in the context of the Eastern Partnership: there is the Association Agreement with the EU, the free trade agreement, the broadening and reinforcement of relations between our countries", said the German Chancellor, stressing that Germany's support the territorial integrity of Georgia.

For the Georgian-Russian relations, Merkel said "we should not tolerate such a situation," vowing to do its best to help peacefully resolve the conflict.

Merkel also stressed the importance of deepening bilateral relations between Germany and Georgia and noted that her visit to Tbilisi will promote it.

For his part, Georgian Prime Minister Mamuka Bakhtadze thanked Germany's support and vowed to continue strive to join the European Union and NATO.

German Chancellor Angela Merkel Thursday started her maiden visit to Georgia, which is the first stop of her South Caucasian tour. She will also visit Armenia and Azerbaijan in the coming days.