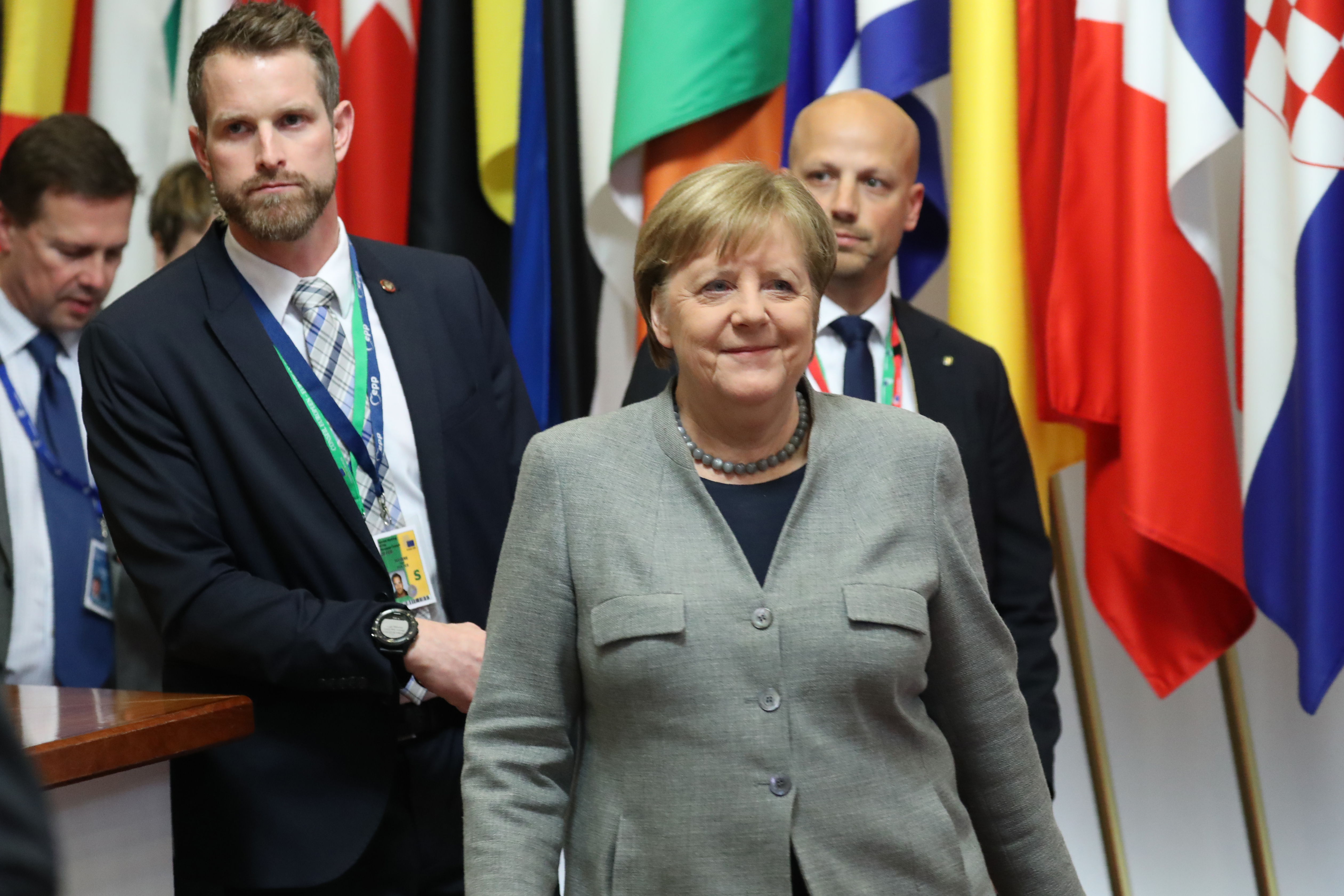 Photo: Germany's Chancellor Angela Merkel leaves at the end of the special European Council summit in Brussels on February 21, 2020. /AFP

Germany's conservatives are expected to unveil their new leadership Monday, as Angela Merkel's party puzzles over how to prepare for the veteran chancellor's departure next year.

Ratcheting up the challenge for the Christian Democratic Union (CDU) is an internal crisis over how it should position itself against the extremes of right and left that have reshaped the nation's political landscape.

After announcing her resignation earlier this month, CDU leader Annegret Kramp-Karrenbauer -- widely known as "AKK" -- is to reveal her plans around midday.

She will go public a day after the party suffered its second-worst result ever in a regional election, placing third in city-state Hamburg with just 11.5 percent of votes.

German media reported that leaders would likely put off the key question of who should lead the party as chancellor candidate in upcoming parliamentary elections, planned at the latest for autumn 2021.

Meanwhile, an extraordinary party congress in May or June should anoint a new party chairman -- unless the CDU opts for a stop-gap solution that shares power among the contenders to avoid a damaging internal dust-up.

AKK launched the race to succeed Merkel after barely a year as head of the party, by announcing her resignation on February 10.

Regional lawmakers in the eastern state of Thuringia had defied an edict from Berlin not to ally with the extremes, by voting with the far-right Alternative for Germany (AfD).

It was the latest sign that the defence minister had failed to stamp her authority on the CDU and become a credible candidate to succeed Merkel.

AKK initially planned a quick departure, hoping to elevate a successor who would also lead the party into the 2021 election.

But her own example shows how difficult it is for a party chief to make their mark while the phenomenally popular Merkel remains in office.

"How can Angela Merkel be got rid of" to clear the way, top-selling daily Bild asked.

In the starting blocks are two politicians who promise to break with her centrist course and lead the CDU rightwards, to win back voters from AfD.

One, Friedrich Merz, is a former Merkel rival who recently described her fourth government as "abysmal", while young Health Minister Jens Spahn is a rising party star.

The choice of leader will set the tone for the future of a party that has dominated German politics since the post-World War II federal republic was founded in 1949.

Beyond the high-profile personalities, the conservatives also need to clarify what they stand for in an increasingly splintered political landscape that hinders stable majorities, be it in Berlin or the 16 state parliaments.

Top of the list is whether the CDU will stick to its rigid policy of refusing to cooperate with either the far right or the far left, borders growing increasingly difficult to maintain as their share of the vote increases.

Thuringia is a textbook case, as last year's regional elections produced no clear governing majority following a surge by the AfD.

But after a nationwide outcry, the regional CDU retreated -- only to be publicly rebuked by Berlin chiefs for its plan to "tolerate" a minority government led by radical-left successors of the one-party state in communist East Germany.

Weekly Der Spiegel labelled the CDU's zig-zagging "self-destruction" by "a party without direction or a strategic centre."

The conservatives are "a party out of control," Bild said.