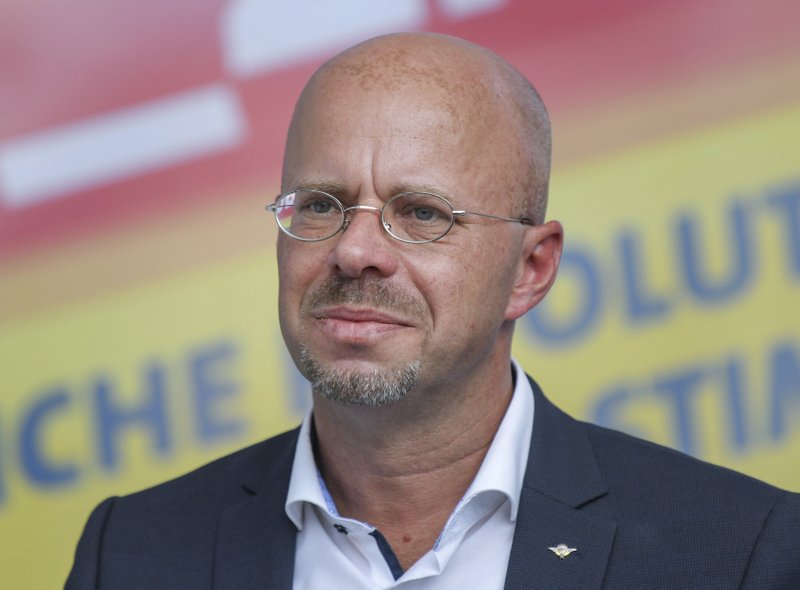 Andreas Kalbitz, chairman of the AfD in Brandenburg, in Cottbus, Germany. (Photo: AP)

A regional leader of the far-right Alternative for Germany party on Friday dismissed new reports of ties to extremists groups that opponents say should disqualify him from being elected in a weekend vote.

Andreas Kalbitz, the party’s leader in the eastern state of Brandenburg, confirmed in a statement reports by weekly Der Spiegel that he attended a 2007 far-right event in Athens, saying he took part out of “curiosity.”

But Kalbitz denied being part of a delegation that included members of Germany’s NPD party, which German authorities have tried unsuccessfully to ban on the grounds of extremism.

Kalbitz, whose AfD party could come first in the Sept. 1 regional election in Brandenburg, said in an email that any suggestion he was linked to the flag incident was “simply a lie.”

Earlier this week, public broadcaster rbb reported that the 46-year-old attended a camp organized by the HJ, a neo-Nazi youth movement, in 1993. Kalbitz has previously acknowledged attending a camp by the group’s successor organization in 2007, but downplayed this and other ties to known extremist groups, insisting that he abides by the German Constitution.

“Whoever surrounds themselves with neo-Nazis and marches with right-wing radicals abroad, puts the boot into our democratic values,” Olaf Scholz said on Twitter.

“The evidence against AfD’s chief in Brandenburg weighs heavily,” added Scholz, who is running to lead the center-left Social Democrats, urging Brandenburgers to vote against him.

Recent polls put the ruling Social Democrats neck-and-neck with AfD in Brandenburg, though other parties have made clear they won’t consider working with the far right. A separate regional election takes place Sunday in the neighboring state of Saxony, where AfD is challenging Chancellor Angela Merkel’s center-right Christian Democrats for first place.