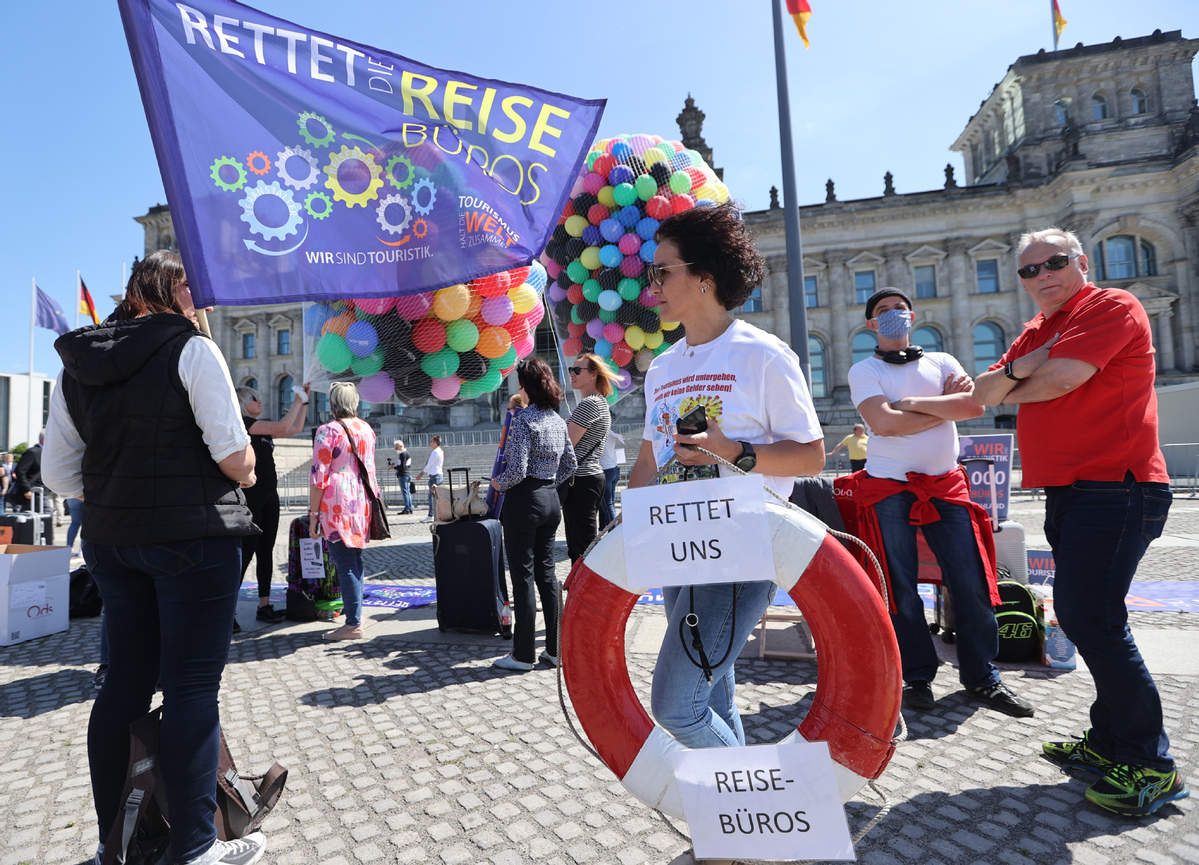 Members of travel agencies and the tourism industry participate in a demonstration in front of the lower house of German parliament, Bundestag, demanding financial help from the government, amid the spread of the coronavirus disease (COVID-19) in Berlin, Germany, May 27, 2020. [Photo/Agencies]

Due to the lockdown measures in force in Germany until May, the country's economic output in the second quarter (Q2) of 2020 is likely to decline by more than 10 percent compared to the first quarter, the German Institute for Economic Research (DIW Berlin) said on Wednesday.

DIW's economic barometer showed a "drastic collapse" and fell to a record low of 20 points in May. In April, the barometer still showed just below 37 points for Q2. Even during the 2008-2009 financial crisis the values stayed above 50 points.

Germany's economy would probably "pick up some momentum again" in the course of the partial easing of COVID-19 measures, according to the DIW. This is also shown by the "recent brightening of business expectations" of German companies.

"The slump is drastic, and a complete recovery will take a long time," warned Claus Michelsen, economic research director at the DIW. "Foreign business is likely to collapse and demand will remain weak, especially for capital goods."

Germany's federal government and states agreed on Tuesday to extend contact restrictions until June 29, but some German states, such as Thuringia and Saxony, had already announced a "paradigm shift" from June 6 onwards.

Although the measures are gradually being withdrawn, economic capacities remain limited in order to meet hygiene requirements, the DIW noted. In addition, German consumers are "changing their behavior to reduce the risk of infection."

Companies and service providers are gradually returning to normal operations, but "reaching a level of demand as before the outbreak of the pandemic is something completely different," added DIW economic expert Simon Junker.

For the entire year 2020, leading think tanks in Germany, including DIW Berlin, have predicted that the country's economic output would fall by 4.2 percent because of the coronavirus pandemic.