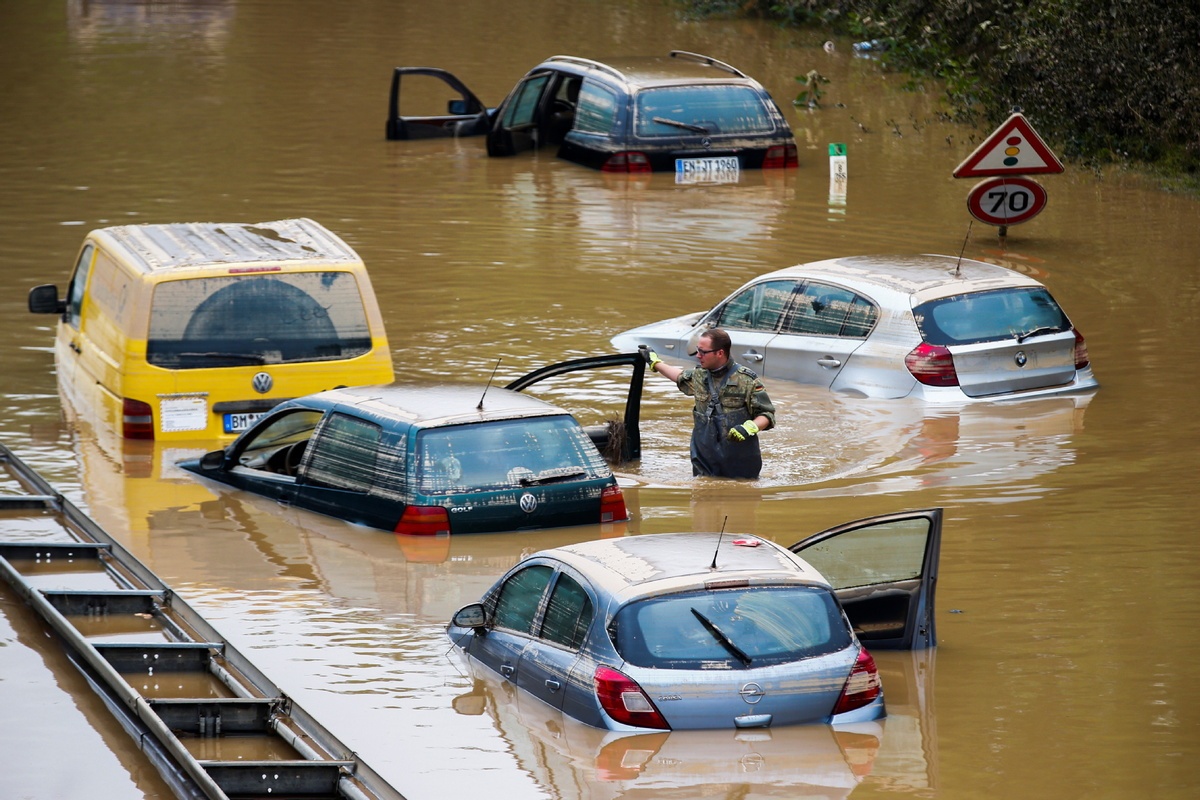 A member of the Bundeswehr forces, surrounded by partially submerged cars, wades through the flood water following heavy rainfalls in Erftstadt-Blessem, Germany, on July 17, 2021. (Photo: Agencies)

BERLIN -- In the wake of severe flash floods that have hit Germany in recent days, the government could greenlight emergency aid and reconstruction assistance worth billions of euros as early as Wednesday, Interior Minister Horst Seehofer said at a press conference here on Monday.

"People can count on us not only to talk about it in these very serious hours, but also to implement things quickly," Seehofer said.

Last week, the intense rainfall and the ensuing catastrophic floods in part of Germany blocked roads and highways, cut off electricity and swept away entire houses. North Rhine-Westphalia and Rhineland-Palatinate were hit particularly hard, with more than 160 people killed, around 750 injured and many still missing.

Mobile networks and electricity grids in the affected areas are still not working properly. According to Germany's largest mobile network operator Vodafone, one in six base stations were still cut off from the network on Monday, with many sites damaged or even completely destroyed.

Westnetz, the region's biggest grid operator, is still busy getting electricity running again. The task is made difficult because all buildings connected to the power lines have to be individually checked for water levels first.

In some regions like Ahrtal, it is "not foreseeable yet" when electricity will run again, according to Westnetz. The company is currently working on "provisionally restoring electricity" with emergency generators, many of which were donated by other German companies, such as E.ON subsidiary VSE.

Although extreme summer rainfall events have always occurred, "the observed increase in frequency and intensity in recent years is clearly related to climate change," Thomas Kesseler-Lauterkorn of the German Weather Service told Xinhua. Nonetheless, the flash floods could be described as a "once-in-a-century event".

Germany would face "such climate events more often in the future, and we need better prevention", said North Rhine-Westphalia's Minister President Armin Laschet, who visited the Steinbachtal Dam together with Seehofer, where thousands of helpers were able to prevent a collapse of the dam and further flooding by pumping out water.