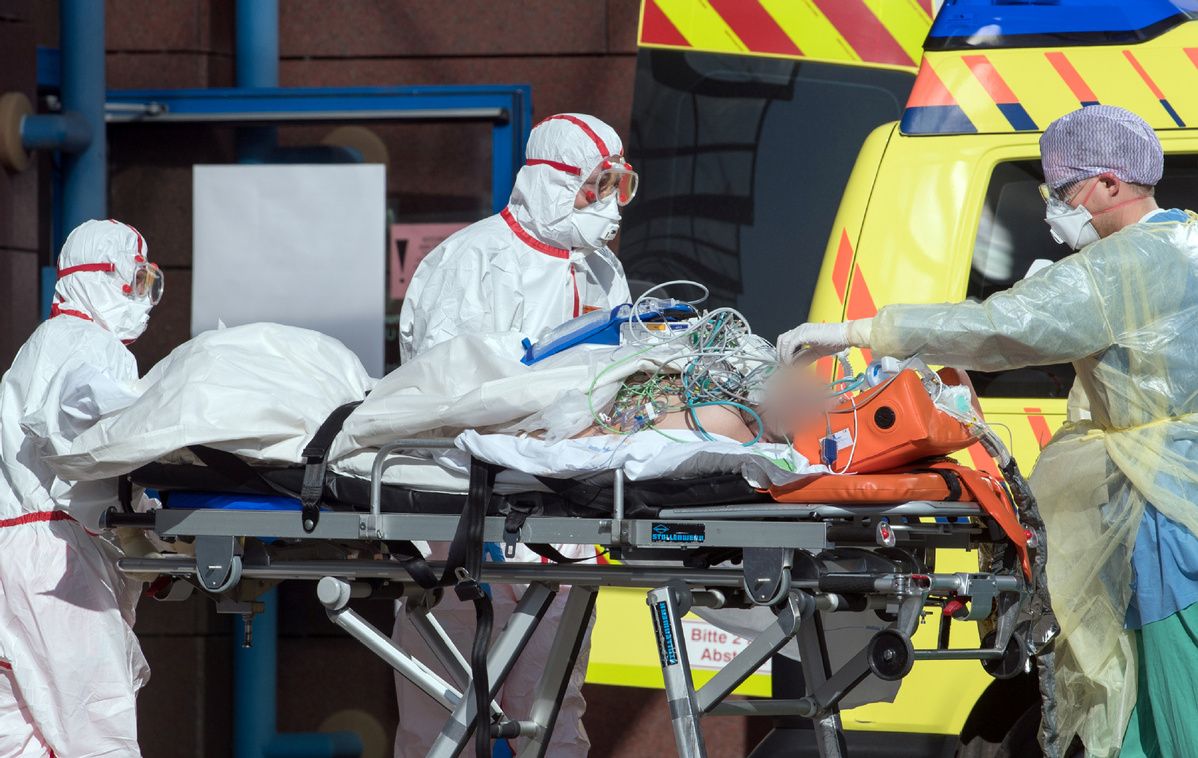 An Italian patient infected with coronavirus arrives at the Helios hospital in Leipzig, Germany, March 25, 2020, as the spread of the coronavirus disease (COVID-19) continues. (Photo: Agencies)

German hospitals on Tuesday welcomed their first novel coronavirus patients from Italy, where the health system has been overwhelmed and more people have died than in any country.

A first group of six Italian patients arrived at Leipzig airport in Saxony, and the western state of North Rhine-Westphalia announced plans to take 10 Italian patients during the coming days. "We need solidarity across borders in Europe," said the state premier, Armin Laschet. "We want to preserve the European spirit."

Saxony Premier Michael Kretschmer said the government in Italy had asked for help. "In Italy they are now making an ethically very difficult decision …choosing six people to be put in the aeroplane," Kretschmer said.

Leipzig took two of the patients, both critically ill 57-year-old men moved from intensive care in Bergamo, where overburdened wards are having to choose who receives life-saving ventilator treatment.

Germany has 31,554 confirmed cases but has only had 149 deaths, and is using the time before the expected surge to strengthen its intensive-care capacity, according to media reports.

The German government is offering hospitals huge state subsidies to help accelerate plans to double that capacity, currently at around 28,000 beds. Germany has also been more rigorous than some other European Union countries in testing for the virus, one possible factor behind the country's exceptionally low mortality rate.

German hospitals also took in patients from France on Tuesday. "We have still three, five, seven days because we are before the (bigger) wave," Hartmut Bueckle, a spokesman for the university clinic in Freiburg, close to the French border, told Welt TV. "We want to use this time to offer our French neighbors the possibilities we still have for now."

The real number of novel coronavirus cases in Italy is probably 10 times higher than the official tally, the head of Italy's disaster management agency warned as deaths rose again and the government made the lockdown even more draconian.

"A ratio of one certified case out of every 10 is credible," said Angelo Borrelli, the head of the Civil Protection Agency, suggesting the real number of cases is around 400,000.

Hopes were raised that the peak of contagion had been reached in Italy as the rate of new infections has been falling since Sunday. The number of positive cases increased by 5,249 to 69,176 on Tuesday, a rise of 8 percent. But the number of deaths grew by 743 in 24 hours, lifting the death toll to 6,820.