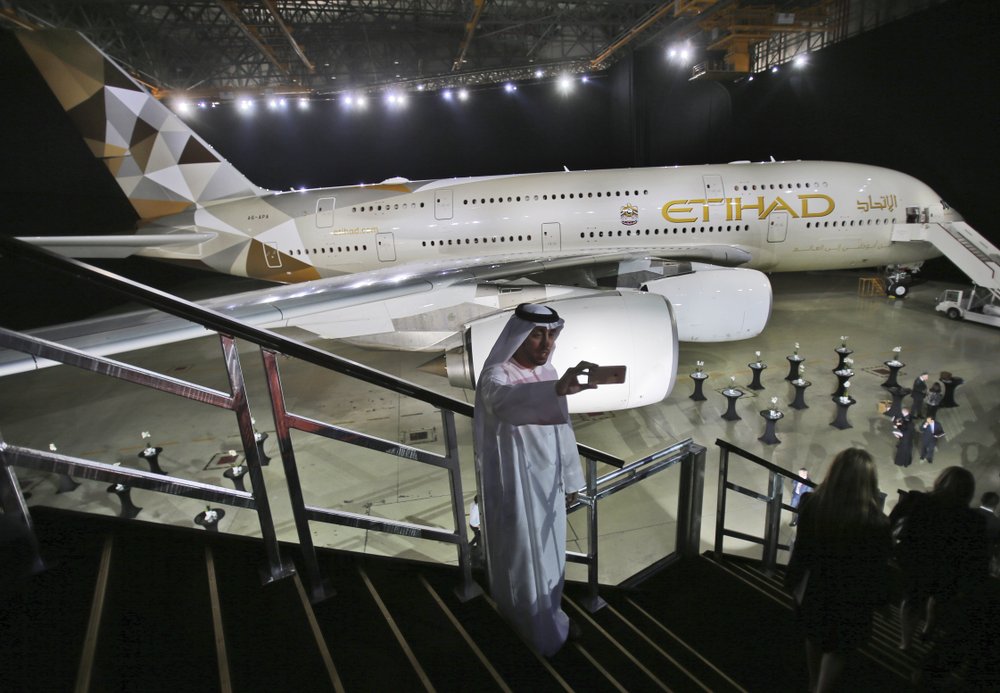 In this Dec. 18, 2014, file photo, an Emirati man takes a selfie in front of a new Etihad Airways A380 in Abu Dhabi, United Arab Emirates. Abu Dhabi-based Etihad Airways said Thursday, Feb. 14, 2019, that it has restructured planned airplane purchases from Airbus and Boeing as the government-owned carrier faces financial turbulence. (Photo: AP)

Germany’s economy minister says it’s now up to Airbus to find new jobs for German workers who are affected by the end of production of the A380.

Peter Altmaier told reporters in Berlin that the company’s decision to end manufacture of the superjumbo “doesn’t come as a surprise.”

He cited competition from Airbus’ own, smaller models.

Altmaier said “that’s why Airbus has a responsibility to find socially acceptable solutions, especially replacement jobs, for the affected employees in Germany.”

He said he expects the company to hold talks with staff and unions on the issue now.

Germany’s economy ministry says airplane manufacturer Airbus hasn’t yet repaid all of the loan it received to develop the A380.

In a statement Thursday, the ministry indirectly confirmed a report by German business daily Handelsblatt that part of the 1.1 billion euro loan from 2002 is still outstanding.

Neither the paper nor the ministry specified how much still needs to be repaid.

The economy ministry said it was informed by Airbus ahead of the public announcement to end production of the world’s biggest passenger plane.

It added that officials will examine the consequences of Airbus’ decision and discuss them with the company.

The ministry said about 1,000 jobs in Germany could be affected by the move but the aim should be to ensure they are redeployed to production sites for other models.

Meinhard Gerken, who represents the union’s chapter along the country’s north coast, said it was “a shame about this nice plane” but added that the company’s decision was “understandable, because the A380 didn’t sell.”

Gerken said in a statement that the increase in production for other models, such as the A320, A330 and A350 means “employees at sites in northern Germany have plenty of work.”

Airbus has A380 production facilities in Hamburg, Bremen, Buxtehude and Stade.

Gerken said labor contracts with Airbus prevent any job losses in Germany before the end of 2020, but the union will seek to ensure there are no lay-offs after that date.

One of the Airbus A380′s original test pilots says the giant plane will be remembered for pushing the technological barriers of aviation like the supersonic Concorde.

Claude Lelaie was a co-pilot aboard the maiden flight of the superjumbo in 2005, 101 years after the Wright brothers’ first flight.

Speaking Thursday to The Associated Press, Lelaie said he was “feeling a bit sad” after Airbus announced the end of the A380 program.

But he also expressed understanding, saying: “That’s business, you have to ensure the success of the company.”

The now-retired pilot said that despite its huge size and weight, the A380 was a “very nice aircraft to fly” and not that different from other Airbus models in the way it handled.

He said technological advances from the A380 then fed into other models, including the A350. The A380 and the now also retired Concorde, he said, “both made history and allowed progress, technological progress.”

Unions decried Airbus’ decision to abandon the A380 amid worry about possible job losses as a result.

Airbus says that a recent data breach appeared to target its intellectual property.

Guillaume Faury, the head of Airbus commercial aircraft and future CEO of the Airbus group, said Thursday that the company is working on technical and legal tools to combat this kind of cyberattack.

He said “we are constantly under attack, this is the new world we are living in.”

Airbus said in late January that hackers broke into its information systems but the breach had no impact on commercial activities. The perpetrators obtained access to data that included the professional contacts and identification details of some Airbus employees in Europe.

The head of European aviation manufacturer Airbus says he’s optimistic that Britain and the EU can find a solution for a smooth divorce instead of a chaotic cliff-edge Brexit next month.

Airbus CEO Tom Enders has threatened to move its U.K. operations out of Britain if there’s no deal spelling out future trade relations.

While Airbus is stockpiling parts on both sides of the Channel in case of a no-deal Brexit, Enders said Thursday that “I’m still optimistic that a solution can be found, that the forces of reason will finally prevail” in London and in Brussels.

France-based Airbus is particularly vulnerable because its airplane parts are made in several countries, including at 25 facilities in Britain. Tariffs between the U.K. and EU would be a huge blow.

Airbus has reported a 29 percent rise in profits for 2018 despite losses of 899 million euros ($1 billion) from its troubled A380 superjumbo jet and A400M military transporter plane.

The company reported Thursday net profit of 3.1 billion euros over last year, up from 2.4 billion euros in 2017. Revenues were up 8 percent to 63.7 billion euros, including from its defense business.

Airbus said it forecasts similar profits in 2019 in line with growth in the world economy and air traffic.

The long-haul carrier Emirates says it has struck a deal valued at $21.4 billion with Airbus, while saying it is sad to see the end of production of the double-decker A380 jetliner.

Emirates made the announcement Thursday at the same time that Airbus in Toulouse, France announced the end of the iconic airliner’s production.

The Dubai government-owned airline, based out of the world’s busiest airport for international travel, had the A380 as the backbone of its fleet.

European aviation giant Airbus says it will stop making its superjumbo A380 in 2021 after struggling to sell the world’s biggest passenger jet.

Airbus said in a statement Thursday that Emirates is cutting back its orders for the plane and as a result “we have no substantial A380 backlog and hence no basis to sustain production.”

The decision is a boon for rival Boeing and a blow for Airbus. Airbus had hoped the A380 would squeeze out Boeing’s 747 and revolutionize air travel as more people take to the skies.

Instead, airlines have been cautious about committing to the costly plane, so huge that airports had to build new runways and modify terminals to accommodate it. The double-decker planes started flying in 2008 and seat more than 500 passengers.