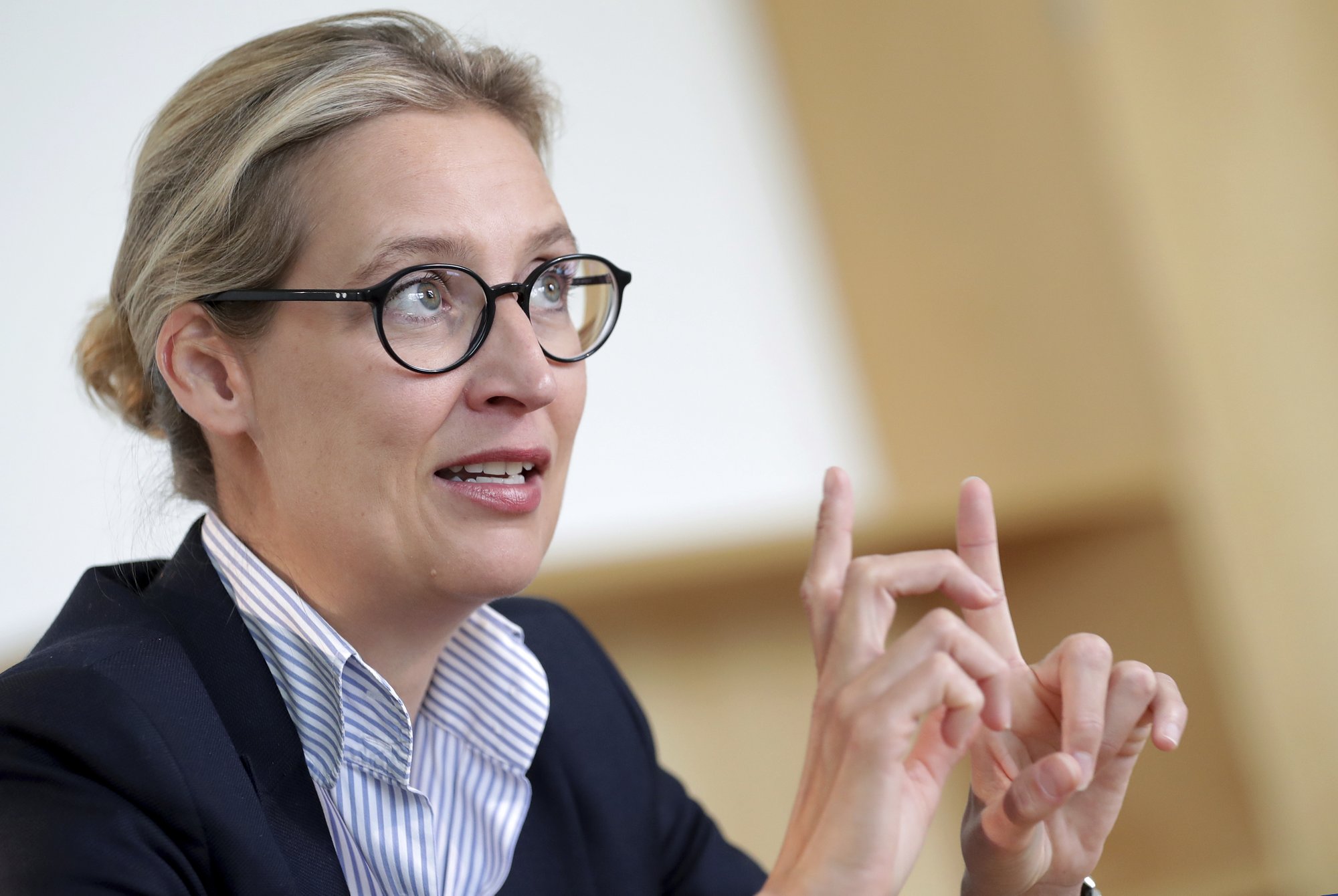 In this Tuesday, May 7, 2019 photo Alice Weidel, co-faction leader of the Alternative for Germany party (AfD) at the German federal parliament, Bundestag, attends an AP interview in Berlin, Germany. (Photo: AP)

Europe’s new right could take a page out of US President Donald Trump’s populist playbook when it comes to winning support ahead of this month’s European elections, says the co-leader of the Alternative for Germany party.

Alice Weidel, a 40-year-old economist known for her stinging attacks on the European Union, is at the vanguard of a movement that’s challenging Europe’s post-war consensus of ever-greater political cooperation.

“You can learn a lot from Trump’s election campaign, including in terms of mobilizing people and issues,” Weidel told The Associated Press, noting that mainstream pundits underestimated Trump’s chances of winning right up to the end.

She also praised former White House strategist Steve Bannon’s ability to harness the media to push Trump’s message. Weidel’s party has invited Bannon to a networking event Saturday in Berlin, although it’s unclear whether he will attend.

“What’s existentially important, also for us, is of course the creation of a certain public, of free media for example, in which we can also reflect our positions,” she said Tuesday in a wide-ranging interview in her party’s parliamentary offices. “And we really have a problem with that at the moment.”

Mainstream media in Germany have highlighted the forays of her party, known by its German acronym AfD, into far-right ideology, anti-Semitic statements and ties to neo-Nazis.

Her co-leader, Alexander Gauland, referred to the time of Adolf Hitler’s dictatorship as a “speck of bird poop” in Germany’s history, while Bjoern Hoecke, a powerful party leader in the east, has suggested it’s time for the country to stop atoning for its Nazi past.

Weidel initially focused on criticizing the shared euro currency, but as that party faction waned she has increasingly turned her attention to stronger borders and restrictive migration policies.

While those are common themes for all of Europe’s right-wing and far-right parties, they have differed on how to respond. Weidel questioned whether Bannon’s brand of hyper-partisan media can be transplanted across the Atlantic, saying a cookie-cutter approach to promoting nationalist parties across Europe would fail.

Ahead of the European Parliament elections, which are taking place in the EU’s 28 nations from May 23-26, Weidel’s AfD has joined forces with nationalist parties in other EU countries, including the populist, anti-migrant League in Italy and France’s far-right National Rally.

Still, some differences are pronounced. The AfD and Scandinavia’s right-wing favor a market economy, for instance, while the National Rally is more protectionist. And the League, the National Rally and the AfD are all pro-Russian, putting them at odds with Poland’s PiS party and the Finns Party in Finland.

The May 26 European Parliament vote in Germany will test AfD’s ability to keep increasing support since its founding in 2013. The AfD entered the EU Parliament with more than 7 percent of the vote in 2014 — and it’s predicted to get a double-digit result this time.

Like in other European countries where populism has surged, AfD has become a conduit for voters who feel the EU is a danger to national sovereignty and must be pared down or even abolished.

AfD’s platform for the European election proposes that Germany quit the EU — following Britain’s lead — unless there are substantial reforms. Weidel wouldn’t set a reform deadline, but said Germany should hand the EU a list of demands just like former British Prime Minister David Cameron did in 2015.

Among her long list of gripes about the EU, Weidel cited efforts to prop up the euro — which is now used by 19 nations — and the EU’s failure to control immigration. She also backed Trump’s criticism of the EU’s tariffs on imports of American automobiles, which are higher than US duties on European cars.

Weidel said it’s still unclear whether the populist, right-wing Fidesz party of Hungarian Prime Minister Viktor Orban might leave the center-right group in the EU parliament and move to the new nationalist alliance.

“Attempts are being made to woo Viktor Orban,” said Weidel. “But it depends on Viktor Orban himself.”

“There are some differences on policies toward Russia,” she added, without elaborating.

Weidel’s party has taken a largely pro-Moscow line. It backs lifting the EU sanctions imposed against Russia over its 2014 annexation of Ukraine’s Crimea Peninsula and support for pro-Russian separatists in eastern Ukraine.

Asked whether her party would favor repealing the EU sanctions even if Russia stays in Crimea, Weidel said the issue was “controversial” and there was no easy answer.

“Of course, one can understand Russia, which really needs an ice-free harbor, and Crimea ensures that,” she said.

Weidel dismissed fears that AfD would encourage Germany to revert to its pre-war, expansionist policies even though party members were filmed over the weekend singing the shunned first stanza of the German national anthem. The song includes the line “Deutschland über alles” — “Germany above all” — and refers to German territory stretching through Poland into what is now Russia’s Kaliningrad region.

“It’s not forbidden, but of course it wasn’t wise,” Weidel said.

With her party stagnant at about 13% support in recent national polls, Weidel said the AfD still has room to grow. It has already entered Germany’s federal parliament, where it is the biggest opposition party, and is in all 16 state assemblies.

One position that has put the party at odds with German public opinion is climate change, which has risen to the front of voters’ concerns. Germany’s environmentalist Green party is polling at 20% support, more than twice their last national election result.

AfD’s platform questions whether man-made emissions are responsible for climate change, despite the overwhelming number of scientists who agree it is.

“It’s absolutely not proven that humans influence the climate,” said Weidel. “It may be the case but the extent, that’s to say how big this influence is, hasn’t been answered.”

“One might imagine that the sun has a big influence on our climate,” she ventured.

Scientists say the sun is actually at its dimmest for half a century.

“Solar activity has gone down since the 1950s, so if anything, the sun has counteracted global warming,” said Stefan Rahmstorf, head of earth systems analysis at the Potsdam Institute for Climate Impact Research near Berlin.

Unorthodox claims about migrants, Islam and climate change have become AfD’s hallmark in recent years, ensuring the party a prominent presence in the news and on social media.

Weidel, on the party’s more moderate side, accused German media of treating AfD unfairly by focusing on certain elements to portray it as “a right-wing party, or even much worse.”

“Last night I couldn’t go eat at a restaurant,” said Weidel, referring to an incident Monday in which an upscale Berlin restaurant refused to take a booking for the party’s top brass. “I was described as anti-Semitic, racist. Just like that.”