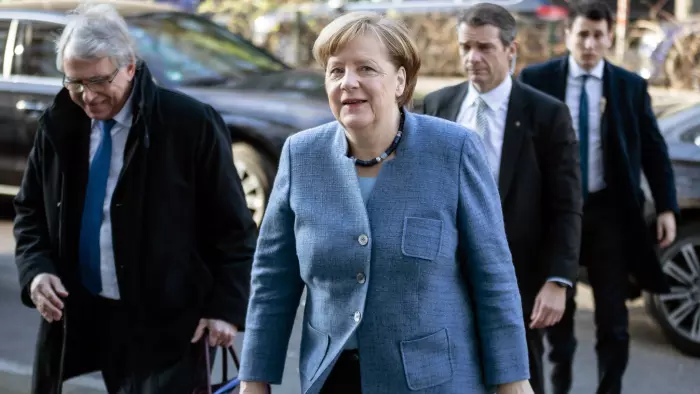 Negotiators for Angela Merkel’s conservatives and the centre-left Social Democratic party (SPD) have said they are hopeful of presenting a coalition deal on Tuesday after their talks yielded an agreement on the country’s Europe policy.

The chancellor’s Christian Democrats (CDU) emerged as the strongest party in last September’s federal elections but have struggled over the last four months to find parties with whom to form a stable coalition government.

“We are on the final stretch but we’re not finished yet,” the CDU deputy leader, Julia Klöckner, told the broadcaster ARD. The two parties are still at loggerheads over labour policy and an SPD-driven reform of Germany’s multi-payer healthcare system, German media reported on Monday.

The two parties had agreed on Sunday on investing €4bn to boost the building of 1.5m new social and private homes by 2021, as well as setting aside €10bn to promote high-speed broadband expansion.

The SPD leader, Martin Schulz, announced on Monday that the two sides had also reached an agreement on the European chapter of the coalition agreement that amounted to “an urgently needed signal for a fresh start for Europe”.

The agreement would commit the next German government to “more investments, an investment budget for the eurozone, and an end to the austerity mantra”, as well as “fair taxation” of internet giants such as Google, Apple, Facebook and Amazon, Schulz said via an information service for SPD party members.

As a next step, Schulz has to sell the coalition deal to the SPD’s approximately 450,000 party members, who will need to give a renewed “grand coalition” the green light via a membership vote.

The SPD’s leadership faces opposition from groups including its own youth wing, the Young Socialists, who believe it should reinvent itself in opposition rather than seek another term in government.

Only SPD members who join the party before 6pm on Tuesday will be able to cast a vote in the ballot. At a special party summit in January, only a narrow majority of SPD delegates voted in favour of continuing coalition talks.

Europe’s oldest social democratic party faces an uphill struggle in coming years irrespective of whether it helps form the next government. According to a new survey by the pollster Insa, only 17% of Germans plan to vote for it in fresh elections – a mere two percentage points more than those who would vote for the rightwing populist party Alternative für Deutschland.