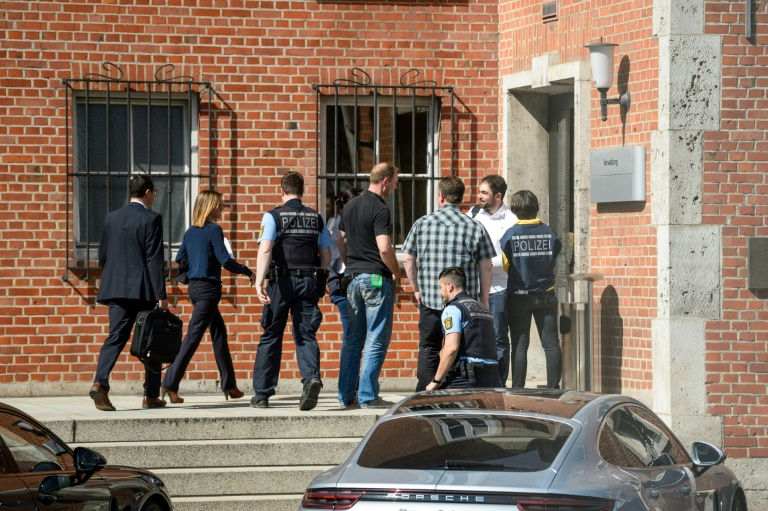 It is the first time Porsche's offices have been searched over the diesel cheating scandal (Photo: AFP)

German police raided the offices of Porsche and Audi Wednesday as part of a fraud probe against two top Porsche executives and a former employee of the luxury carmaker in connection with the diesel emissions cheating scandal.

Prosecutors from Stuttgart and Munich were joined by some 160 police officers in a search of "10 sites" in the states of Baden-Wuerttemberg and Bavaria, the Stuttgart prosecutor's office said in a statement.

The three unnamed individuals are under investigation for suspected fraud and false advertising stemming from the manipulation of exhaust treatment in diesel vehicles manufactured by Porsche.

"The three accused consist of one member of Porsche's executive board and one senior manager. The third accused no longer works for Porsche," prosecutors said.

A Porsche spokesman told AFP that searches were taking place at the company's offices in the southwestern city of Stuttgart, as well as at Audi's offices in Ingolstadt.

"Audi AG and Porsche AG are cooperating fully with the investigating authorities," he added.

Both high-end carmakers are owned by Volkswagen, which admitted in 2015 to using cheating software designed to dupe pollution tests in some 11 million cars worldwide, mainly in its own-brand VW cars but also in those made by Audi, Porsche, Skoda and Seat.

It is the first time Porsche's offices have been searched over the diesel cheating controversy, while Audi has already been raided three times over the past year, most recently in February.

A spokeswoman for the Munich prosecutor's office told DPA news agency that Wednesday's searches at Audi "had nothing to do" with a separate probe into Audi's role in the diesel scam.

Audi developed the V6 3.0-litre diesel engine used in some of the manipulated cars.

Prosecutors declined to give further details about the Porsche raids, which come less than a week after the Volkswagen group replaced its CEO -- former Porsche boss Matthias Mueller -- in a bid to turn the page on the "dieselgate" scandal.

Mueller, who led Porsche between 2010 and 2015, took the helm of the VW group in the turbulent days after the scandal broke.

But he too came into prosecutors' sights as the group plunged into a sea of legal challenges at home and abroad that have already cost the auto giant over 25 billion euros ($31 billion) in fines, buybacks and compensation.

Stuttgart prosecutors said last year they were investigating Mueller over market manipulation, suspecting he failed to share information about the diesel scandal quickly enough with shareholders.

Last Friday, Mueller was replaced as CEO by VW brand chief Herbert Diess, who has vowed to steer the company out of the crisis by pushing on with much-needed reforms and continue a shift towards electric cars and sustainable mobility.

The "dieselgate" saga has cast a pall over Germany's vaunted car industry, with suspicions of emissions manipulation spreading to other carmakers.

Luxury carmaker BMW and Mercedes-owned Daimler have both had their offices raided by investigators searching for evidence of possible cheating.

And BMW recalled some 12,000 cars in February after admitting they contained software that allowed the engines to release more harmful emissions on the road than in the lab -- but insisted the software was installed by mistake.