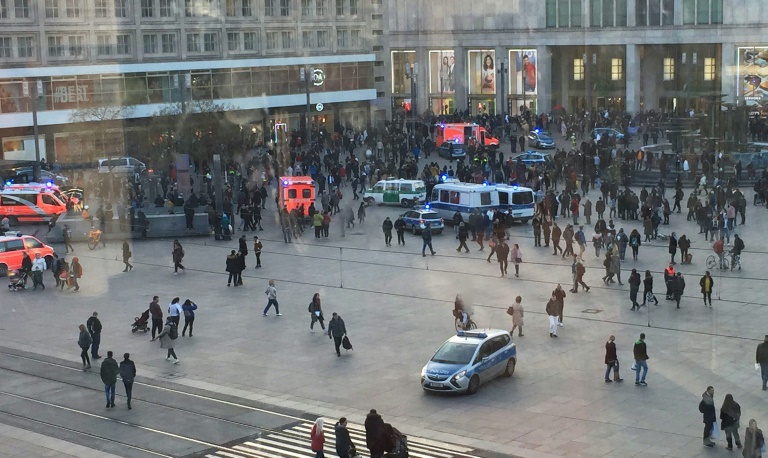 Berlin police said they made nine arrests after the fight broke out on the Alexanderplatz in the city centre. (Photo: AFP)

German police warned social media stars Friday to rein in their followers after making several arrests during a brawl in Berlin when fans of two YouTubers squared off.

Berlin police said they made nine arrests late Thursday after a fight broke out on the Alexanderplatz in the city centre among some 400 backers of two rival stars of the internet platform.

Police said it took around 100 officers, two of whom was injured as a result, to break up the melee involving around 50 youths, which led to nine arrests. "Tear gas was also used," they added.

A police spokesman said the fight continued in a nearby subway station when a 20-strong group started throwing rocks taken from the railway lines at each other.

According to media reports, the brawl started as a result of a turf battle between the rival YouTubers.

As a result, a senior Berlin police chief appealed to those with large internet followings to be more responsible.

"We see in the rapper scene, and increasingly also with other influencers, that they are sometimes very negligent with their influence," said Norbert Cioma, head of the Berlin chapter of the GdP police union.

"It seems to be fashionable to deliberately open a powder keg to generate more followers, subscribers and clicks."

"For all the press writing to and calling me or who want to meet up, you can keep your offers of 'we will change your name' or 'we offer you 100 euros' and the lies you have told," he wrote.

His rival from the southern city of Stuttgart, who goes by his social media moniker 'ThatsBekir_' and has 262,000 followers, said he "needs to take a break" as a result of the fracas and wants to leave Berlin as quickly as possible.

"I'm traumatised and feel afraid to go out. I want to be with my family," the 18-year-old YouTube star told Berliner Morgenpost daily.

The teenager accused his YouTube rival of going on his "Livestream and insulting me".

He also claimed to have been threatened, but had expected the meeting in Berlin to be peaceful.

Having been accompanied by five friends to met Al Amood, 'ThatsBekir_' claims he was punched by his rival in the face and things quickly became ugly.

"He asked me why I had called him a 'son of a whore', that's how things started," said the teenager.

Videos of the meeting posted online appears to show the pair talking face-to-face, surrounded by their supporters, and after a brief conversation, punches started to fly.

'ThatsBekir_' believes his rival from Berlin wanted attention from the internet - "he wants fame and subscribers - nothing more," added the 18-year-old.