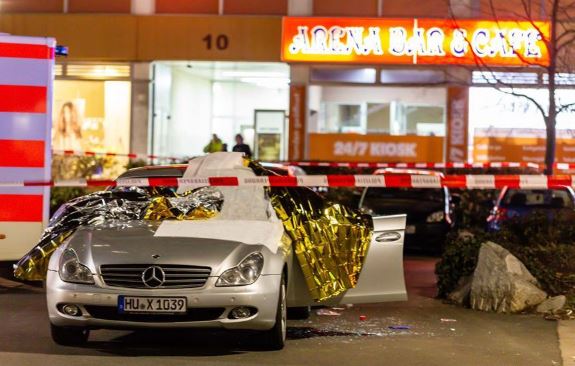 BERLIN, Feb. 26 (Xinhua) -- After the xenophobic shooting in Hanau that killed nine people, German politicians across most parties have sharply criticized growing right-wing extremism in their Ash Wednesday speeches.

The so-called "political Ash Wednesday" in Germany takes place every year after the carnival season. On this day, the country's leading politicians traditionally hold speeches and engage in verbal disputes with rival parties.

Markus Soeder, head of the Christian Social Union (CSU), sister party of the governing Christian Democratic Union (CDU), criticized the strong rhetorics of the right-wing Alternative for Germany (AfD) party and described the AfD as the "parliamentary arm of the radical right-wing scene."

Last week, a 43-year-old German citizen with a xenophobic and racist motive killed nine people with immigrant backgrounds in the German city of Hanau, and later he killed his mother and himself.

Responding to the accusations against his party, Gottfried Curio, spokesperson for domestic policy of the AfD's parliamentary group in the Bundestag, rejected any connection between the politics of the AfD and the shooting attack in Hanau and described his party as a victim of "disgusting defamation."

Many Ash Wednesday speeches also dealt with the question of the CDU's future leadership and political orientation and the relationship between the governing coalition of the Social Democratic Party (SPD) and the CDU/CSU.

Throwing her party into a political vacuum, CDU leader Annegret Kramp-Karrenbauer has recently announced that she was not planning to run for the country's chancellorship and would resign as the party's leader.

For now, the race for Chancellor Angela Merkel's succession is likely to be fought between the CDU's former parliamentary group leader Friedrich Merz, who is leading in the polls, and Armin Laschet, minister-president of North Rhine-Westphalia, who has more support within the party.

Regardless of the outcome, Kramp-Karrenbauer has warned her party against overly intensive introspection in view of the competition for her and ultimately Merkel's succession in Germany.

Even SPD leader Saskia Esken has expressed concern about the situation in coalition partner CDU. "We have no tactical interest in an unstable CDU," she said.