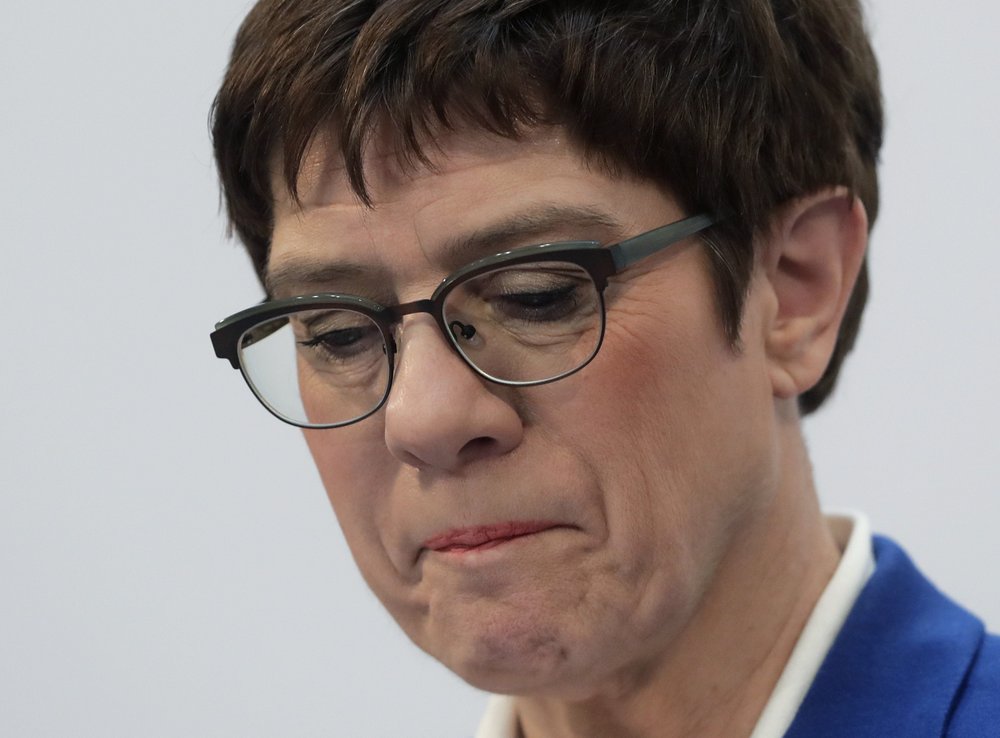 Chancellor Angela Merkel’s heir apparent shook up German politics Monday by declaring she would step down as the governing party’s leader and not run for chancellor, fueling uncertainty in the country seen as Europe’s anchor of stability amid Brexit and pressure from the far right.

Annegret Kramp-Karrenbauer, whose flagging support dropped further after regional Christian Democratic Union lawmakers ignored the party’s instructions, told senior CDU members she would not seek the chancellorship in next year’s decision. The surprise decision upended Merkel’s plans to hand Kramp-Karrenbauer the reins of power after more than 15 years as chancellor.

“I took note of this decision with the utmost respect, but I also say that I regret it,” Merkel told reporters, thanking Kramp-Karrenbauer for her work and for agreeing to stay on until a new party leader is chosen. Kramp-Karrenbauer plans to remain in her role as Germany’s defense minister.

The announcement followed days of in-fighting within the party over the election of a governor in the state of Thuringia. Christian Democratic Union legislators there voted with the far-right Alternative for Germany party (AfD) last week to oust a left-wing incumbent.

The CDU representatives not only defied Kramp-Karrenbauer’s advance appeals and undermined her leadership, but broke what is widely regarded as a taboo in post-war German politics around cooperating with extremist parties.

“The AfD stands against everything we as the CDU represent,” Kramp-Karrenbauer told reporters Monday in Berlin.

Manfred Weber, a German member of the European Union parliament who leads a center-right bloc in the EU legislature, told daily newspaper Welt that the situation in Thuringia reflected a Europe that “is in a phase of growing instability; politics is becoming more serious.”

Merkel has said she will not run for a fifth term in Germany’s next general election, which is now scheduled for fall 2021. But any shift to the right by the Christian Democrats could trigger a breakup of Merkel’s federal coalition with the center-left Social Democrats and increase the chances of an early national election.

“If it’s up to me, it won’t have any effect on the stability of the grand coalition,” Kramp-Karrenbauer said after announcing her planned withdrawal.

Florian Hense, an analyst at Hamburg-based private bank Berenberg, said the Social Democrats “would have little to gain from provoking early elections.”

But leading figures in Merkel’s party expressed concerns about fallout from the announcement.

Peter Altmaier, Germany’s economy minister and a close Merkel ally, said the Christian Democrats were in “an unusually serious situation.”

Recent polls had Merkel’s conservative block at about 28% support nationally, followed by the left-leaning Greens at about 22%. The Social Democrats are struggling with only about 14% support, about the same as the far-right Alternative for Germany.

Among the names currently being bandied around as future CDU party leaders are Health Minister Jens Spahn and Friedrich Merz, who were beaten to the leadership by Kramp-Karrenbauer in 2018. Armin Laschet, the governor of North Rhine-Westphalia, Germany’s most populous state, is also being mentioned as a possible contender.

While Spahn and Laschet are considered centrists, Merz has tried to appeal to the conservative wing of the party that has flirted with the far-right Alternative for Germany. A lawyer once tipped to lead the party in the early 2000s, Merz was sidelined by Merkel before she became chancellor in 2005.

Bavarian governor Markus Soeder, the leader of the Christian Social Union, the Bavarian-only sister party to Merkel’s CDU, is also the focus of some speculation.

Merkel’s spokesman Steffen Seibert told reporters in Berlin that she stood by her decision not to run for a fifth term in 2021, despite the latest development.

The Alternative for Germany welcomed Kramp-Karrenbauer’s resignation, as did Germany’s former domestic intelligence head, Hans-Georg Maassen, a vocal figure on the right of Merkel’s party since his ouster as Germany’s spy chief in 2018.

Alternative for Germany has established itself as a powerful far-right force since its founding in 2013, taking double-digit shares of the vote in regional and national elections. Its success has complicated Germany’s political tradition of governing with multi-party coalitions, as most of its rivals have ruled out working with Alternative for Germany.

The far-right party has successfully wielded populist tactics, emphasizing national self-interest and immigration controls while tolerating anti-Semitism and historical revisionism among its members.

Alternative for Germany’s leader in the state of Thuringia, Bjoern Hoecke, has in the past marched alongside far-right extremists and called for a “180-turn” in the way the country commemorates its Nazi past.

Kramp-Karrenbauer insisted that any Christian Democrats who believe their party can find common ground with AfD should ask themselves “whether they can remain members of the CDU.”

Germany’s foreign minister said on Twitter it was important for all parties to take a “crystal clear position against far-right extremism.”

“Whoever becomes the new chairman of the CDU needs to ensure that the party remains a reliable partner,” Heiko Maas, a member of the Social Democrats, tweeted. “This means the party must draw a line between itself and far-right extremists at all levels.”