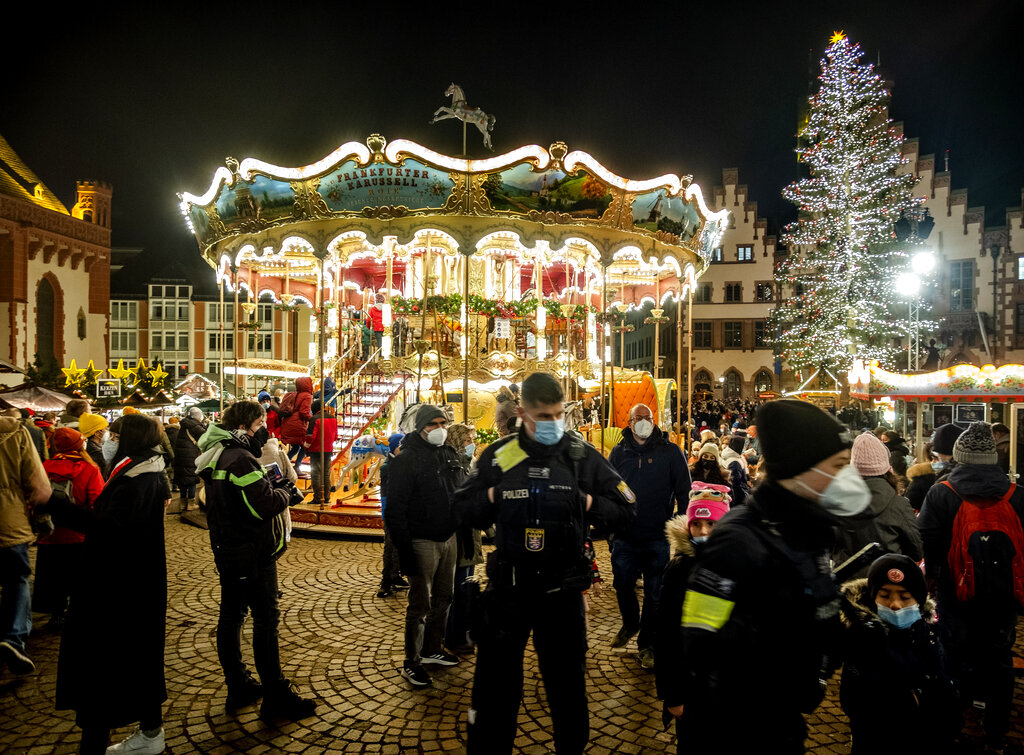 German police officers walk past a merry-go-round on the final day of the Christmas market in Frankfurt, Germany, Wednesday, Dec. 22, 2021. (Photo: AP)

Germany's health minister said Friday that the proportion of coronavirus infections with the new omicron variant will increase sharply in the days ahead, and he appealed to people to take steps to avoid infection during Christmas festivities.

German authorities are anticipating another wave of COVID-19 cases as a result of omicron, though so far the delta variant remains dominant in the country and case numbers have drifted downward after spiking last month.

“The proportion of omicron cases will rise VERY strongly in the coming days,” German Health Minister Karl Lauterbach wrote on Twitter. He acknowledged there would be delays in local health offices reporting figures over the holidays but said, “We are still keeping an eye on developments."

“Please avoid infections during the celebrations,” Lauterbach wrote. “Even the vaccinated should test themselves.”

Chancellor Olaf Scholz tweeted that he knows it's difficult to reduce contacts over Christmas “but if we stand together and get vaccinated, we will get through this crisis.”

German authorities are introducing new contact restrictions, while most regions are shutting nightclubs and putting other measures in place. In most cases, the curbs are set to take effect just after Christmas, though a few will go into force starting Friday.

In his televised Christmas message, President Frank-Walter Steinmeier said it was up to individuals as well as authorities to act responsibly during the public health crisis.

“The state can't put on a protective mask for us. It also can't get vaccinated for us,” he said, according to a text released by his office ahead of the speech's broadcast. “No, it comes down to us — to every one of us.”

Steinmeier thanked “the large, often silent majority in our country that has acted cautiously and responsibly for months.” He urged people to remember that “we are one country” after demonstrations against restrictions and a planned universal vaccine mandate flared up in Germany in recent weeks.