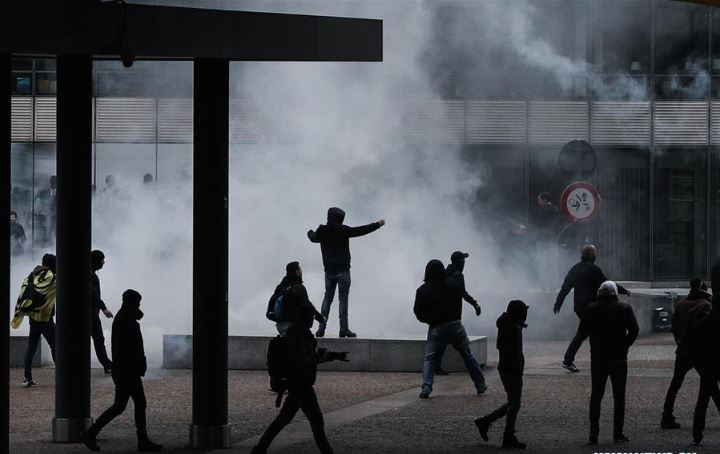 Right-wing and far-right protesters clash with the police during the "March Against Marrakech" rally in front of European Union institutions headquarters in Brussels, Belgium, Dec. 16, 2018. (Photo: Xinhua)

BERLIN, Jan. 8 (Xinhua) -- A Syrian migrant has been charged with murder over the death of a German man last year that sparked right-wing anti-migration unrests in the eastern German city Chemnitz.

According to a statement by the public prosecutor's office of Chemnitz, the defendant, a Syrian asylum seeker named as Alaa S. under German privacy laws, was accused of fatally stabbing the 35-year-old Daniel H. during a quarrel on Aug. 26, along with at least one other suspect, an Iraqi man named as Farhad R.A.

Farhad R.A. has not yet been apprehended, and the German police have issued an international warrant for him.

The German man's death sparked violent marches against migration, with video footage showing migrant-like people being chased on the street of Chemnitz by the people appeared to be locals.

In the meantime, counter-demonstrations were also held in the city in favor of migration and against right-wing populism and xenophobia.

The clashes in the city fanned a wider political debate on German Chancellor Angela Merkel's immigration and refugee policies since 2015 that opened the border for more than 1 million asylum seekers, most of them Muslins from the Middle East.

Prosecutors said more than 100 witnesses were questioned during the investigations. The police found that the attack occurred after one of the migrants, the Iraqi who is still on the run, got in a spat with the victim. The Syrian man got involved later.

Both men appear to have stabbed the victim in his arm and chest. They also stabbed another German man, who was severely injured but fortunately survived. The police were unable to find out what caused the quarrel.

A third man, Yousif A. from Iraq, could also be prosecuted at a later date. He was held in custody, but was released in September as there was no enough evidence against him. It is still not exactly clear how he was involved.