Germany has now given at least one coronavirus vaccine shot to more than half its population but officials urged people Friday to remain cautious and slow the spread of the more contagious delta variant.

COVID-19 infections have declined sharply in Germany over the past few weeks, on some days dropping below 1,000 per day for the first time since September. On Friday, the national disease control center said 1,076 new cases were reported in the past 24 hours, and there were only 10.3 cases per 100,000 residents over the past week. 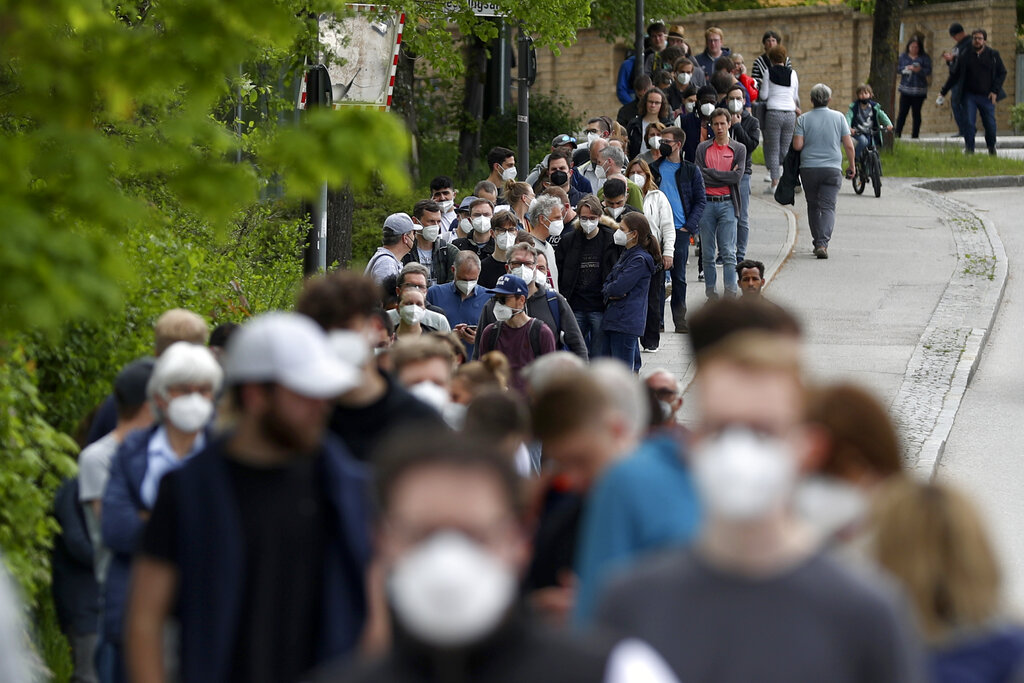 In this Saturday, May 15, 2021 file photo, people queue at a vaccination centre in Ebersberg near Munich, Germany. (Photo: AP)

After a slow start, vaccinations have accelerated in Germany and everyone 12 and over has been eligible to get a shot since last week. The country is administering more than 800,000 shots per day.

“These figures give us confidence,” Health Minister Jens Spahn said. “Within a few weeks, it will be possible — as things stand, with the deliveries we can expect — to offer vaccinations to all adults who are willing.”

But he and other officials urged Germans to keep up their guard, pointing to Britain's experience with the delta variant. That variant, first discovered in India, has powered another surge of infections in the U.K., forcing the government to delay plans to lift all remaining restrictions on social contact in England until July 19.

The delta variant accounts only for a bit over 6% of new cases in Germany, according to the latest figures, but that number has risen over the past two or three weeks. It accounts for over 90% of new infections in Britain, mainly among youths and young adults.

“The question won’t be whether delta also becomes the dominant variant in Germany and continental Europe, but … when and under what conditions — ideally under conditions with a high vaccination level and low infection figures,” Spahn told reporters in Berlin.

Lothar Wieler, the head of the Robert Koch Institute, the national disease control center, appealed to Germans “not to carelessly squander our success” in bringing down infections. He said that when the delta variant becomes dominant depends very much on people's behavior, “but it will gain the upper hand in the fall, at the latest.”

Germany has restricted travel from the U.K. since May 23, when Britain became the only European country classified as a “virus variant area,” Germany's highest risk category. Airlines and others are restricted largely to transporting German citizens and residents from Britain, and those who arrive must spend 14 days in quarantine at home.

Chancellor Angela Merkel's chief of staff, Helge Braun, cautioned German fans against traveling to London for the later stages of soccer's European Championship. And he told the RedaktionsNetzwerk Deutschland newspaper group that “we must remain cautious until everyone has been offered vaccination.”