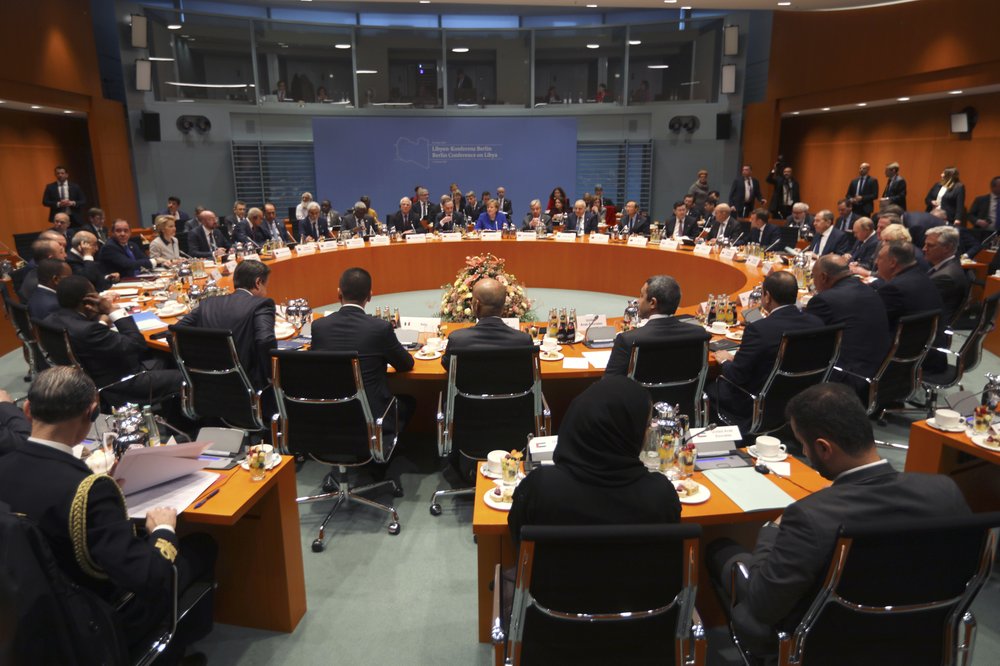 Germany brought together the key players in Libya’s long-running civil war on Sunday, seeking to curb foreign military interference, solidify a cease-fire and help relaunch a political process to stop the chaos in the North African nation.

German Chancellor Angela Merkel welcomed leaders from 11 countries outside Libya as well as the United Nations, the European Union, the African Union and the Arab League to the summit at the chancellery in Berlin. Germany’s months-long diplomatic drive seeks to bolster U.N. efforts to stop the fighting in Libya.

Libya’s two main rival leaders, Prime Minister Fayez Sarraj and Gen. Khalifa Hifter, also came to Berlin. Merkel and her foreign minister met both men at the chancellery before the summit began. They weren’t in a group photo at the beginning of the event, and further details of their participation were not immediately available.

“We are here for an urgent and pressing reason: to stop Libya’s downward spiral,” U.N. Secretary-General Antonio Guterres told the conference.

Its chances of producing any real progress on the ground were unclear, however. A truce brokered earlier this month by Russia and Turkey marked the first break in fighting in months, but the cease-fire has seen repeated violations.

Differences were in full view ahead of the meeting. Speaking Sunday in Istanbul, Erdogan said the world had failed to respond adequately to Hifter’s “reckless attacks” on Sarraj’s U.N.-recognized government.

“Hopes that flourish again with the cease-fire and the Berlin summit should not be sacrificed to the ambitions of the merchants of blood and chaos,” he said.

Erdogan met Putin in Berlin just before the summit. The Russian leader said “we will sincerely strive for the conflict to be resolved.”

Libya has sunk further into chaos since the 2011 ouster and killing of its longtime dictator, Moammar Gadhafi. It is now divided into rival administrations, each backed by different nations: the U.N.-recognized government based in Tripoli, headed by Sarraj, and one based in the country’s east, supported by Hifter’s forces.

Hifter’s forces have been on the offensive since April, laying siege to Tripoli in an effort to capture the capital. Hifter’s forces are backed by Egypt, Russia and the United Arab Emirates, while the Tripoli government has turned to Turkey for troops and weapons.

On Sunday, Libya’s National Oil Corporation said that guards under the command of Hifter’s forces shut down two key oil fields in the country’s southwestern desert, following the earlier closure of all eastern export terminals. Only offshore fields and one smaller facility remain operational, the corporation said.

Germany’s priority is to try to get the outside players that have interests in the conflict on the same page, stem the flow of weapons to Libya and ensure that the cease-fire sticks -- creating space for U.N.-led efforts to re-establish a political process in Libya.

“At the Libya conference, we must see above all that the arms embargo is once again complied with — it has been agreed in principle at U.N. level but unfortunately not kept to,” Merkel said.

Germany is also keen to keep the fighting in Libya from further destabilizing the region, potentially setting off new waves of migrants seeking safety in Europe across the Mediterranean Sea.

German Foreign Minister Heiko Maas, who met Hifter in Libya on Thursday, said the general pledged to respect the cease-fire even though he had left Moscow days before without signing a draft on the truce. Sarraj did sign the document.

U.N. chief Gutteres said it is time to “seize the momentum and strengthen cease-fire arrangements.”

“We reiterate our call to all those directly or indirectly involved in the conflict to do everything to support an effective cessation of hostilities and silence the guns,” Guterres said in remarks released by his office.

“Incessant, blatant violations of the Security Council-imposed arms embargo must stop,” he said.

German officials have been careful to keep expectations in check, saying that the conference can only be the start of a process toward peace.

Pope Francis offered his encouragement from the Vatican on Sunday.

“I strongly hope that this summit, so important, is the start of a path toward the cessation of violence and a negotiated solution that leads to peace and much desired stability,” Francis said in St. Peter’s Square.