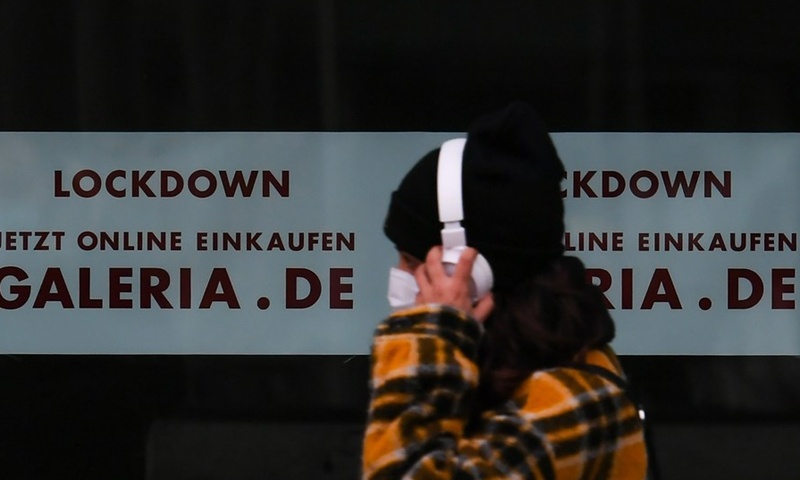 A pedestrian wearing a face mask walks in front of a lockdown sign on the window of a temporarily closed shopping mall during COVID-19 pandemic in Frankfurt, Germany, Jan. 6, 2021. (Photo: Xinhua)

As COVID-19 incidences and death rates remain on a high level in Germany, stricter contact restrictions would take effect nationwide as of Monday until at least the end of January, the government announced.

Some of Germany's federal states already introduced over the weekend stricter rules that Chancellor Angela Merkel and the minister-presidents agreed on last week.

Non-essential shops as well as bars, restaurants and leisure facilities remain closed. In addition, German citizens are only allowed to meet with one additional person who is not part of the household, according to the government.

For regions that exceed a 7-day incidence of 200 new infections per 100,000 inhabitants, the travel radius is restricted to 15 kilometers around the place of residence, unless a valid reason for travel can be provided.

The federal and state governments are aiming to bring the 7-day incidence, which increased from around 137 per 100,000 inhabitants on Friday to 167 on Monday, back down to less than 50 so that the country's health system would not be overburdened.

COVID-19 infections in Germany increased by 12,497 on Monday, bringing the total number of confirmed cases in the country to more than 1.92 million, according to the Robert Koch Institute (RKI).

Meanwhile, more than 613,000 people in Germany have received a COVID-19 vaccination since the vaccination program started late last month, said the RKI.

This corresponds to 7.4 vaccinations per 1,000 inhabitants, according to the federal government agency for disease control and prevention.