A four-week partial shutdown has started in Germany, with restaurants, bars, theaters, cinemas and other leisure facilities closing down until the end of the month in a drive to flatten a rapid rise in coronavirus infections. 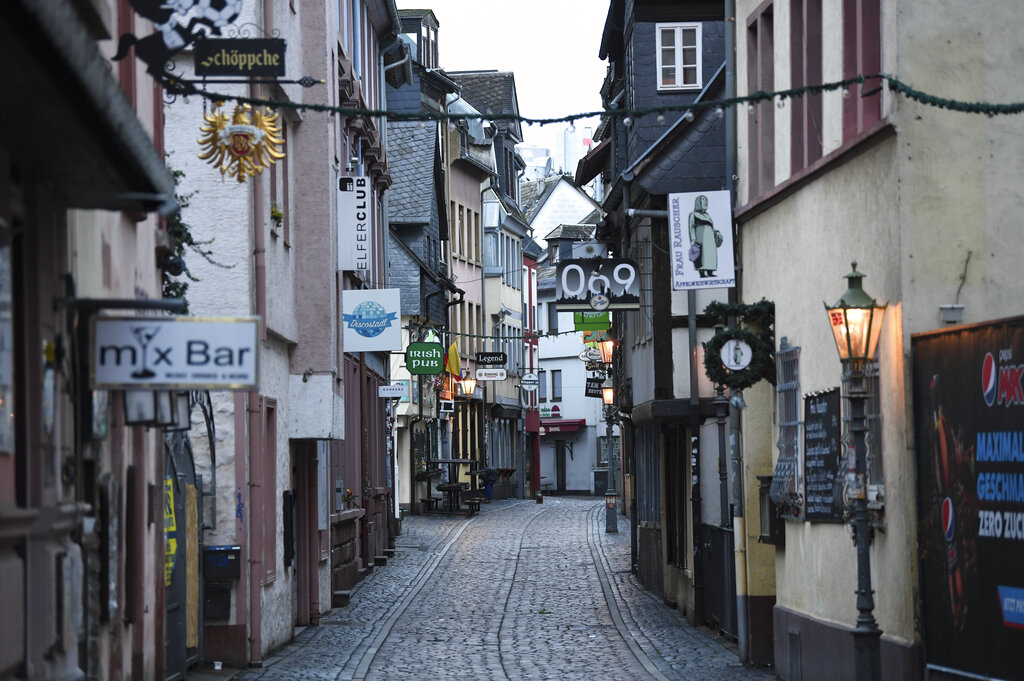 The Klappergasse in Frankfurt's pub district of Alt-Sachsenhausen is deserted in Frankfurt, Germany, Monday, Nov.2, 2020. A four-week partial lockdown has begun all over Germany to slow down the spread of the corona virus. (Arne Dedert/dpa via AP)

The restrictions that took effect Monday are milder than the ones Germany imposed in the first phase of the pandemic in March and April. This time around, schools, kindergartens, non-essential shops and hairdressers are to remain open.

But leading officials decided last week that a “lockdown light” was necessary in light of a sharp rise in cases that has prompted many other European countries to impose more or less drastic restrictions.

On Saturday, the national disease control center reported the highest number of infections in one day -- 19,059 -- since the pandemic began. Figures at the beginning of the week tend to be lower, and the center reported 12,097 cases Monday. But that compared with 8,685 a week earlier, underlining the upward trend.

Germany has reported over 100 new cases per 100,000 residents over the past week. That is fewer than in many other European countries, but far above the 50 mark that officials set earlier this year as an alarm signal that requires action by local authorities.

Chancellor Angela Merkel and state governors are to review the situation after two weeks and discuss whether the measures need to be adjusted.

“The aim is to get back under this level of 50 at which health offices are in a position to trace contacts,” Merkel's chief of staff, Helge Braun, told RBB Inforadio.

Merkel said last week that authorities are currently unable to trace the source of three-quarters of infections.

The restrictions taking effect Monday allow groups of at most 10 people, from a maximum two households, in public. Germans have been asked to refrain from making non-essential journeys and hotels are barred from accommodating people on tourist trips.

Asked whether the restrictions might last beyond November, Braun replied: “Our declared aim is that we want to end the measures in this strictness at the end of November.”

“This is also about enabling Christmas business for German companies, and Christmas celebrations with the family for all of us,” he added. “I consider that important ... the stricter the measures, the quicker they work, so we decided on relatively strict measures.”