When German Chancellor Angela Merkel announced in October 2018 that she would quit at the end of her current term, few gave her much chance of surviving to the 2021 federal elections.

Merkel has since resisted attempts from within her Christian Democratic Union (CDU) to hasten her departure, but now faces a recurring danger in a new form – the fragility of the coalition she leads, and divisions within the main two parties after the European Parliament elections. 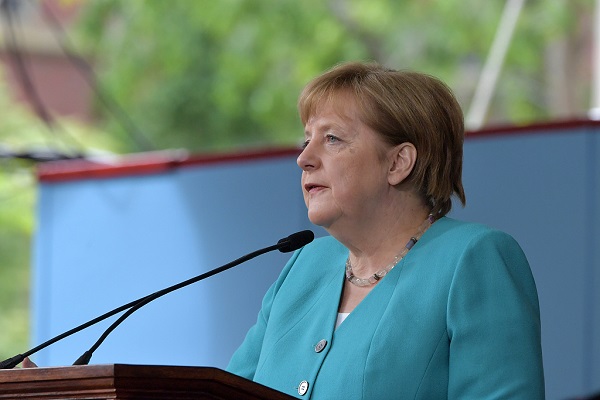 The four-term chancellor, who laid out a defense of Europe – in English – to an audience at Harvard University on Friday, will be back in Germany on Sunday to face a tough crowd. Merkel is no longer party leader, but is expected to be in attendance when CDU chiefs meet to dissect the party's poor performance in the EU elections and the consequences for the coalition, pieced together over six months in 2017.

The CDU slipped from 35 percent in the 2014 EU polls to 28.9 percent, while its coalition partner the Social Democrats (SPD) dropped from 27 percent to 15.8 percent. The losses were replicated elsewhere in Europe, as voters moved away from the "big tent" center parties that have dominated European politics in recent decades.

In Germany, the Greens surged into second place with 20.5 percent, while the populist Alternative for Deutschland (AfD) won around 11 percent, below expectations but still up on 2014.

The success of the Greens, in particular, has intensified pressure on both CDU leader Annegret Kramp-Karrenbauer and SPD chief Andrea Nahles.

The Greens won three times more first-time votes than the next three parties combined and topped the polls among every age group under 60, with the CDU taking only 13 percent among 18 to 29-year-olds.

Both sides of the coalition have also suffered poor regional results over the past year. The CDU's sister party, the Christian Social Union, lost its majority in Bavaria in October, when both the CDU and SPD suffered big losses in Hesse; and in elections in Bremen on Sunday, the SPD lost out for the first time in 73 years – to the CDU.

The next big electoral test comes in September with regional polls in eastern Germany. A breakdown of the European Parliament voting reveals the AfD was the biggest party in both Brandenburg, currently controlled by the SPD, and Saxony, governed by the CDU.

But whether the coalition can last until the September elections remains to be seen.

Following the SPD double defeat – in Bremen and European Parliament polls – there have been renewed calls for Nahles to pull the party out of a deal it reluctantly signed up to. Change of some sort seems inevitable after the Greens laid a strong claim to have replaced the SPD as the main center-left party.

Exiting the coalition would almost certainly lead to a snap election, and probably bring the curtain down on Merkel's time as chancellor. But while the SPD certainly isn't benefiting electorally from being the CDU's junior partner, it fears falling even further in a near-term federal election.

Meanwhile, pressure on Kramp-Karrenbauer, who replaced Merkel as CDU leader in December 2018, is intense. She has overseen a move to the right, a drop in the polls and the party's worst ever performance in a national election.

Kramp-Karrenbauer's personal approval rating was down three points to 36 percent in May, according to an Infratest dimap poll for ARD and Die Welt, while Merkel's rating was up two to 55 percent – the chancellor remains Germany's most popular politician.

The CDU leader has suggested the split in roles has taken a toll on the party's popularity, and Bloomberg reported last week that Kramp-Karrenbauer organized the June 2-3 meeting without informing Merkel, intending to put pressure on the chancellor to step aside.

"The moment the offices of the chancellor and the party leader are split, there will always be space for speculation on how the cooperation is working and how long this phase will last,” the broadcaster quoted her as saying in early May. “It also doesn't leave the party unaffected.”

Merkel on Tuesday dismissed reports that she had given up on her successor as "nonsense," ahead of the key CDU meeting on Sunday and Monday.

With the CDU and SPD in electoral decline and popularity of the Greens and, to a lesser extent, AfD playing out in regional and European polls, Germany's coalition parties have some big decisions to make in the days and weeks ahead.