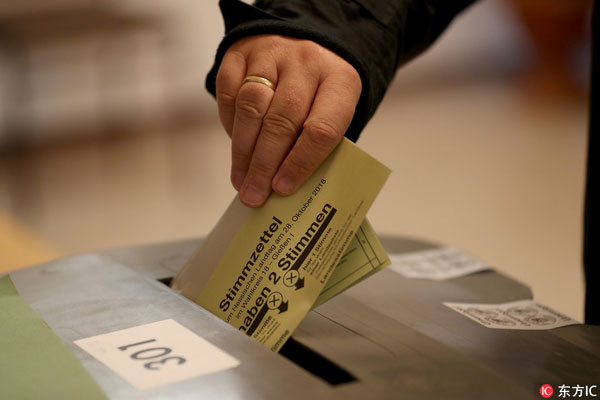 A voter casts his ballot during the Hesse state elections at a polling station in Giessen, Germany, October 28th, 2018. According to the Statistical Office of Hesse some 4.4 million people are eligible to vote in the regional elections for a new parliament in the German state of Hesse. [Photo: Imagine China]

Germany's southwestern state of Hesse on Sunday kicks off a crucial state election, which may further shake the already fragile federal government in Berlin.

Some 4.4 million eligible voters are to elect a new state parliament and a preliminary result will be released at 6 p.m. local time (1700 GMT).

The regional election for the state which hubs Germany's financial center Frankfurt am Main, is closely watched and stylized into a test for the governing parties at the federal level.

In the latest poll on Hessian voter preference made by Infratest Dimap, the Christian Democratic Union (CDU), led by German Chancellor Angela Merkel, and the Social Democratic Party (SPD) both suffered a severe setback.

The CDU gained 26 percent, a sharp decline from the 38.3 percent five years ago, and the SPD at 21 percent, also downed from 30.7 percent, according to the polls.

Some analysts forecast that CDU will have to draw another party to the current CDU and Green alliance state government in order to secure a majority, which means that the CDU's influence will be further diluted and the CDU's state premier Volker Bouffier, seen as a close ally of Merkel, will possibly be replaced.

The regional vote could also push the German federal government into a fresh crisis.

Local media reported that Merkel is gradually losing grip of her own party and the possible failure in Hesse could be another hit for her, which may influence her reappointment as the CDU leader at the party congress set in the coming December.

The SPD has faced fiercer inner struggle even before the Hesse election, as many have already urged the party leaders to design a roadmap to quit the coalition government since the cooperation with the CDU greatly blurred its left-leaning identity.

If this were to happen, Merkel would be left with a minority government, which would lead to an earlier parliament election.