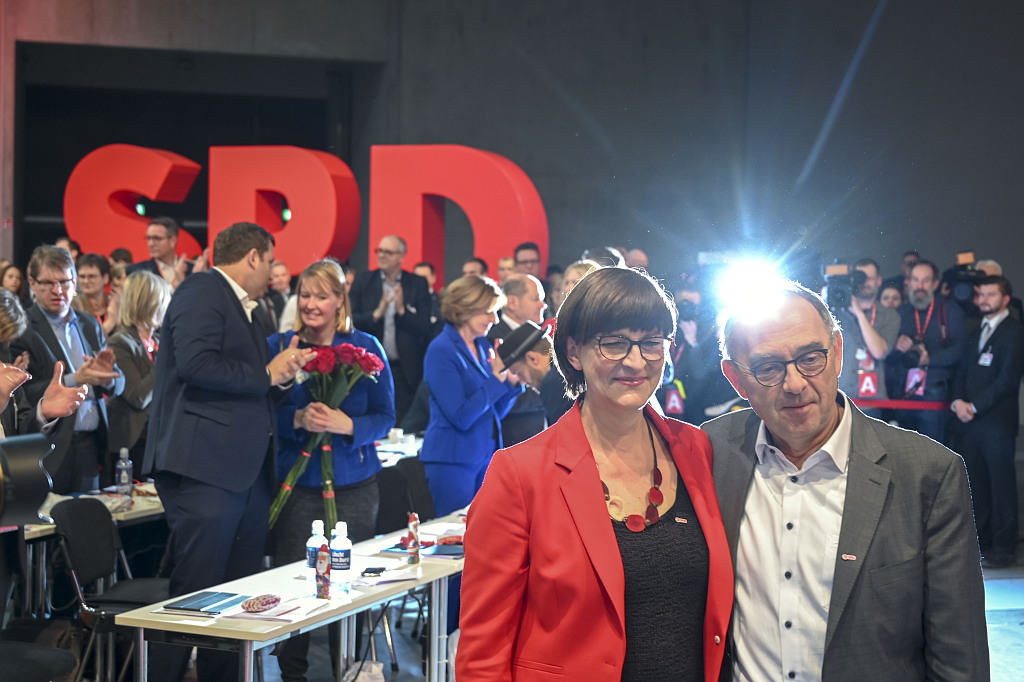 German Social Democrats (SPD) on Friday endorsed a set of demands the party will make to Chancellor Angela Merkel's conservatives to remain in government together.

In a show of hands, a large majority of SPD delegates at a party conference backed the motion which included tougher climate protection measures, investment in infrastructure and an increase in the minimum wage.

The conservatives have said they do not want to renegotiate the 2018 coalition deal or make radical changes but have signaled that they may consider some more modest ideas.

For the first time in Germany's post-war history, the SPD will be led by a duo. At Friday's party conference, Saskia Esken and Norbert Walter-Borjans were formally elected leaders of the party saying their election will usher in a "new era."

Prior to their surprise nomination through a vote by party members, Esken and Walter-Borjans had been relatively unknown in Germany. They are critics of Germany's current grand coalition between the SPD and the conservative CDU/CSU union.

"I was and I am skeptical about the future of this grand coalition," said 58-year-old Esken. In recent years, the SPD has been too busy being part of the government coalition rather than an "independent force with its own mind," she said.

Walter-Borjans, 67, also aims to sharpen the SPD's political profile. Although compromises must be made in a democracy, they should not "blur where we stand," he told the SPD conference.

Since former Chancellor Gerhard Schroeder won national elections with the SPD in Germany in 1998, the party's support has continually dropped from more than 40 percent to just above 20 percent in the 2017 elections.

Walter-Borjans stressed that although any changes would be discussed with the SPD's coalition partner and the responsible ministers, there could be no "determination of the party's opinion based on coalition discipline."

However, Merkel already ruled out a "renegotiation of the coalition agreement" earlier this week and said she was only willing to cooperate with the new SPD leadership "as is usual in a coalition."