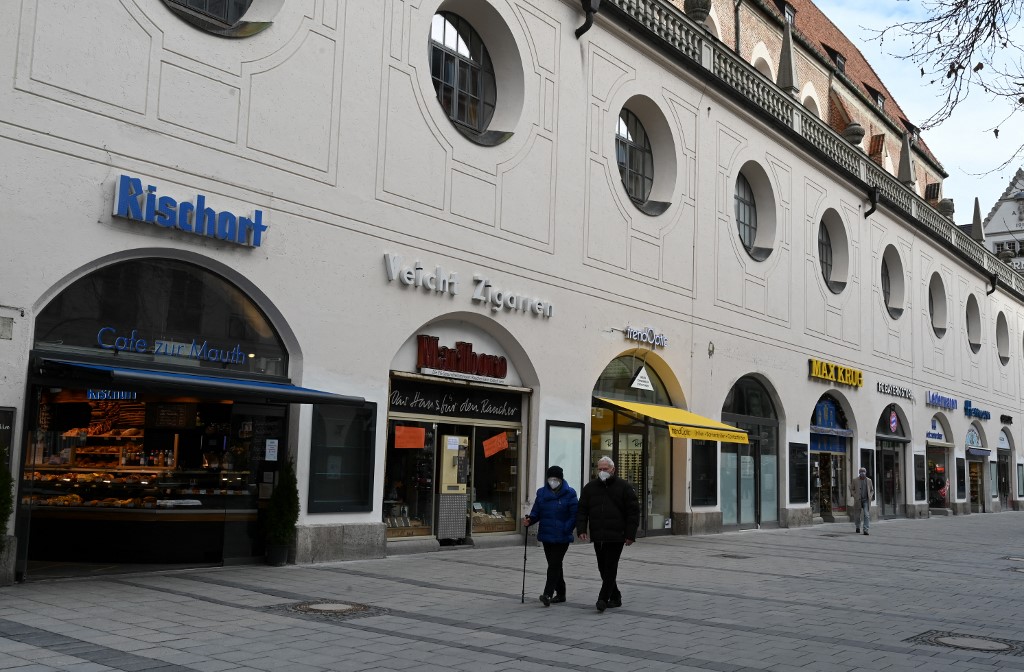 In this file photo taken on February 08, 2021 only few people walk in a shopping street in downtown of Munich, southern Germany, whose shops are closed, amid the ongoing novel coronavirus / Covid-19 pandemic. (Photo: AFP)

"The third wave appears to have broken," Spahn told a press conference in Berlin.

"The infection figures are dropping again, but we are still at a high level. They are not yet falling everywhere at the same rate, but they are falling," he said.

Germany's Robert Koch Institute health agency recorded 18,485 new infections in the past 24 hours on Friday -- compared with 27,543 on the same day two weeks ago.

Under national virus measures introduced in April, areas with incidence rates below 100 are allowed to begin easing some restrictions.

But Spahn warned that easing curbs too much too soon "would only help the virus".

"In this phase of the pandemic, it is really a matter of not gambling away what has been achieved," he said.

But the Bundesrat upper house of parliament on Friday approved new legislation to lift some curbs for fully vaccinated people and those who have recovered from Covid-19.

From Saturday, they would no longer have to abide by curfews or limits on social contacts. that

Berlin's mayor Michael Mueller admitted that it was going to be "damn difficult to check" the curbs are lifted only to those who fall under these categories.

But he argued that "this is about fundamental rights, and they can only be restricted when there is an urgent need to do so".

After a slow start, Germany began accelerating its vaccination campaign in April and last week gave the jab to more than one million people in one day. Some 31.5 percent of the population have received at least one injection by Friday.

Spahn said Thursday that Germany will aim to offer Covid-19 vaccines to all children aged 12 and over by the end of August once a jab is approved for younger people by the European regulator.

It has also opened up the AstraZeneca vaccine to anyone who wants it.

The AstraZeneca jab had previously been recommended only for people aged 60 and older following concerns over blood clotting cases among younger recipients of the vaccine.