German officials made clear Wednesday that they won't be able to relax lockdown restrictions in early January as the country recorded more than 1,000 deaths in one day for the first time. 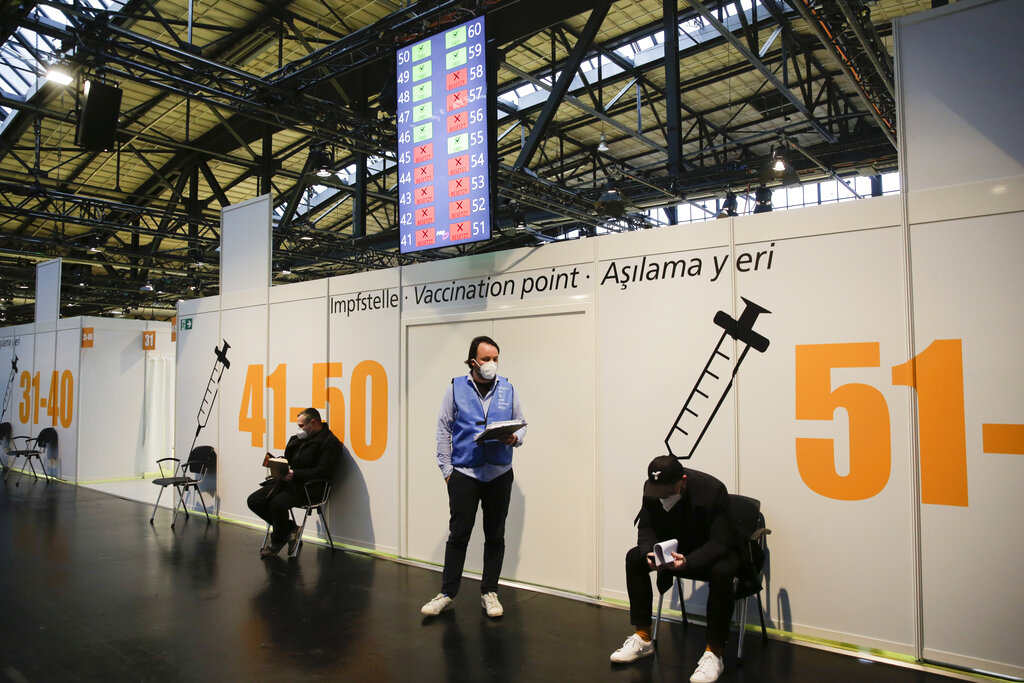 Two men sit on chairs as they wait for their vaccination against the coronavirus and the COVID-19 disease at the Arena Treptow vaccine center in Berlin, Germany, Sunday, Dec. 27, 2020. (Photo: AP)

That figure was likely swollen by delayed reporting but underlined the severity of the situation.

Germany, the European Union's most populous country, shut restaurants, bars, sports and leisure facilities on Nov. 2. That partial shutdown halted a fast increase in new infections for a while but failed to bring them down, prompting authorities to impose a fuller lockdown from Dec. 16, shutting nonessential shops and schools.

Those measures run through Jan. 10. Chancellor Angela Merkel and the governors of Germany's 16 states will consult Tuesday on how to proceed.

“We have to lament 1,129 deaths this morning alone — 1,129 families will be in mourning this new year,” Health Minister Jens Spahn said at a news conference.

“These figures show how brutally this virus is still striking. But the numbers of deaths and infections also show that we are a very long way from the normality we would like,” he added. “So in this situation, I don't see how we can return to the pre-lockdown mode.”

“My expectation is that the lockdown will continue, because we must not take any further risks. The hospitals ... are at their limits,” said the governor of Germany's most populous state, Armin Laschet.

The deaths reported to Germany's national disease control center, the Robert Koch Institute, over the past 24 hours exceeded the previous record set a week ago of 962 and brought Germany’s total death toll to 32,107.

The institute's chairman, Lothar Wieler, said “the most plausible explanation” for the spike in reported deaths was delayed reporting of cases over the Christmas holiday, following relatively low figures over several days.

However, the figure fits into a recent pattern of high numbers of deaths.

Germany had a relatively low death rate in the first phase of the pandemic but has seen hundreds of deaths per day in recent weeks. Among major European nations, Italy, the U.K., France and Spain still have higher death tolls.

Wieler appealed to Germans to keep reducing their contacts to the absolute minimum, saying: “Let's take the wind out of the virus' sails together." He said that, as of Tuesday, there were over 5,600 COVID-19 patients in intensive care, the highest number yet.

The Robert Koch Institute said 22,459 new coronavirus cases were reported over the past 24 hours in Germany, which has 83 million inhabitants.

The vaccination program launched in Germany and across the EU over the weekend offers hope. So far, 78,109 people in Germany have received their first vaccine dose.

All the same, Wieler said Germans will have to stick to social distancing, hygiene and mask-wearing rules for months.

“It will take months before so many people are vaccinated that the circulation of the virus in the population is reduced,” he said.

It's unclear what measures exactly will continue beyond Jan. 10. Schools are the responsibility of state governments alone in Germany.

Spahn said it's “normal” to discuss what happens with schools, but “in case of doubt, I favor a week too many now rather than a week too few.”