BERLIN, July 21 (Xinhua) -- Germany would pay 400 million euros (470 million U.S. dollars) for victims of last week's floods, which were supposed to be available immediately, Minister of Finance and Vice Chancellor Olaf Scholz announced at a press conference on Wednesday. 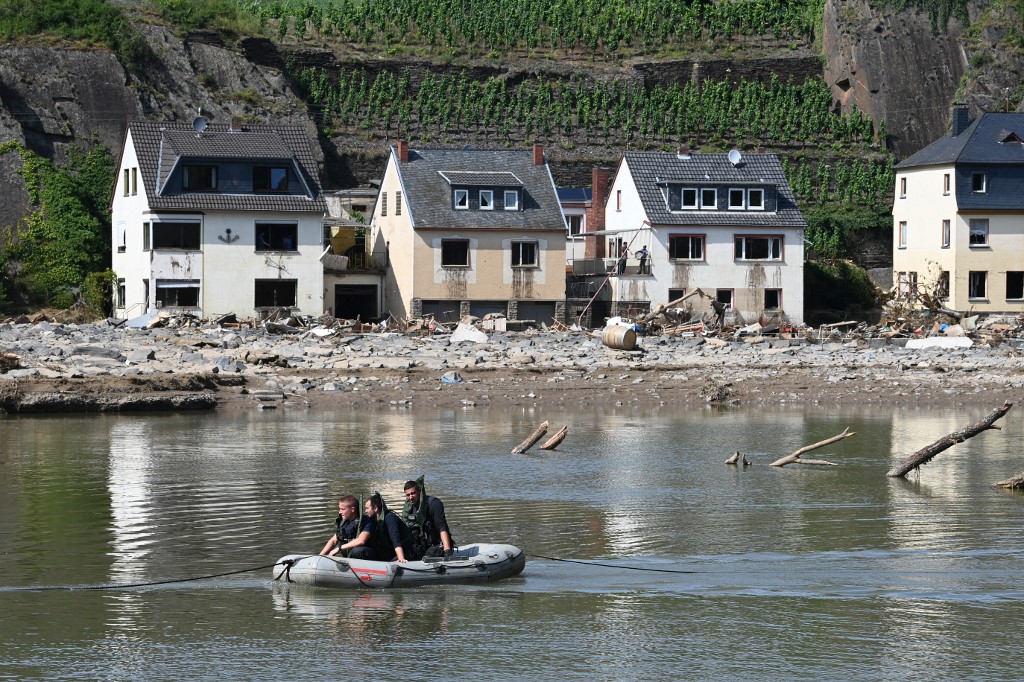 Police officers float on a boat on the river Ahr as damaged houses reflect onto the water and wyneyards are seen on the hills in the background, in Mayschoss, Rhineland-Palatinate, western Germany, on July 21, 2021, after devastating floods hit the region. (Photo: AFP)

It was necessary to quickly send the message to people in the affected areas "that there is a future, that we care together, that this is a matter for us as a whole country, that we are helping," Scholz said.

Last week, catastrophic floods caused by intense rainfall blocked roads and highways, cut off electricity and swept away entire houses. North Rhine-Westphalia and Rhineland-Palatinate were hit particularly hard, with at least 170 people being killed and many still missing.

Half of the 400 million euros of rapid aid payments, which could be further extended unbureaucratically, were made available from the federal budget and half from the states. "If it is the case that more is needed, we will pay more," Scholz said.

In addition, after an initial assessment of the damage by the end of July, reconstruction funds for the infrastructure should also be made available in a timely manner, which could probably run into the billions, according to Scholz.

Asked whether a distinction should be made between who had insurance and who did not when paying out money to rebuild destroyed homes, Scholz said he advocated "not being cynical and not being heartless." It was a "question of solidarity," he added.

Nevertheless, a possible obligation to provide natural disaster insurance for homeowners also had to be debated in the future, because there would be "ever more violent natural events at ever shorter intervals," Minister of the Interior Horst Seehofer said at the same press conference.

As an industrialized country, Germany also had a great responsibility to achieve CO2 neutrality and to develop sustainable technologies, Scholz said. "Man-made climate change must be stopped." (1 euro = 1.1768 U.S. dollars)