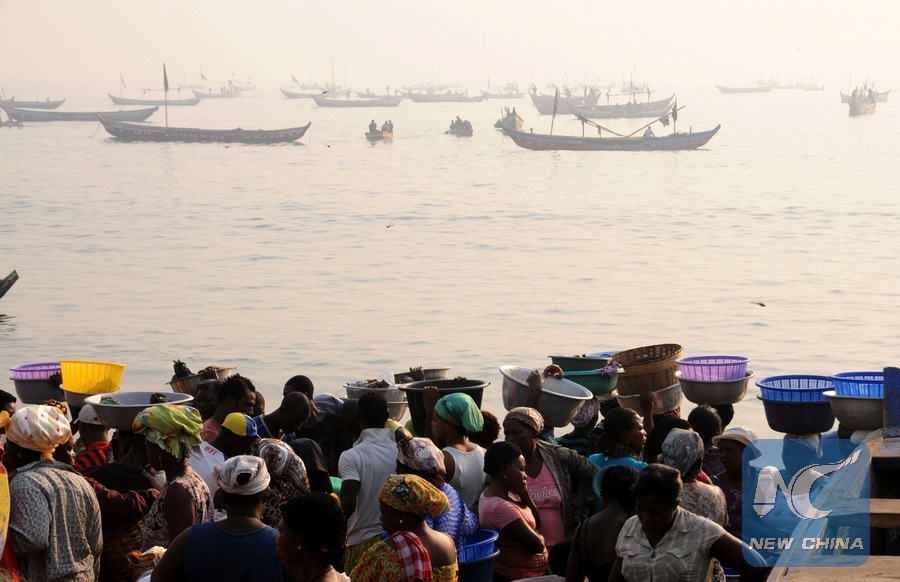 Fishmen and vendors wait for boats with sea products at the fishing port of Jamestown in Accra, capital of Ghana. (File Photo: Xinhua/Shao Haijun)

Eric Aggrey, spokesperson of the Ghana Armed Forces, said the Ghanaian Navy is collaborating with their partners along the Guinea Coast to garner information to enable them to locate and rescue the missing crew members."When the partners find the vessel, the Ghana Navy will be informed," he said to Xinhua.The South Korean foreign ministry said on Saturday that three South Korean sailors are presumed to have been kidnapped in seas off Ghana.In a release, the ministry said a South Korean navy ship in charge of anti-piracy operations in waters off Somalia has been dispatched to the nearby area.The unidentified pirates seized a fishing boat named the Marine 711 with over 40 crew members aboard, including the three South Koreans on the high seas of Ghana near Togo.The Ghanaian Navy has rescued the vessel abandoned by the pirates. The whereabouts of those kidnapped are unknown but they are believed to have been taken hostage at Bayelsa in Nigeria.According to reports by the state-run Ghana News Agency, the pirates riding a speedboat reached on March 26 the vessel sailing to bait grounds for anchovy.

The reports said the pirates were said to have released the vessel the next day, at around 17:30 GMT, which berthed at the Temafishing harbor on Wednesday.The pirates wielding guns were nine in number, Daniel Mensah, second officer in the hijacked vessel, told the local media, adding that the pirates took them hostage at Keta, directed them through Togo, Benin and ended up in Nigerian waters.The South Korean foreign ministry said it was closely cooperating with Ghana, Nigeria and other nations to find out the whereabouts of those kidnapped.