WORLD Ghosn: Bail refusal 'would not be normal in any other democracy'

Ghosn: Bail refusal 'would not be normal in any other democracy' 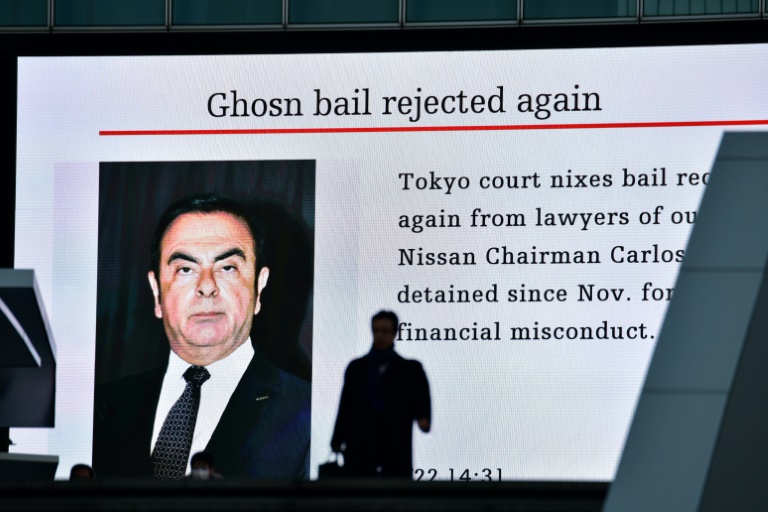 A large screen on a street in Tokyo shows a news program about the denial of bail for former Nissan chief Carlos Ghosn. (Photo: AFP)

Former Nissan chief Carlos Ghosn slammed his ongoing detention in Japan Thursday, telling AFP and a French newspaper the decision to refuse him bail "would not be normal in any other democracy."

"Why am I being punished before being found guilty?" Ghosn asked, speaking to AFP and the Les Echos daily in his first interview with foreign media since his shock November 19 arrest.

Ghosn, who is being held at a Tokyo detention centre on three charges of financial misconduct, said his arrest was "a story of betrayal".

"There is no question about this," he said, speaking firmly and clearly in English, dressed in a black tracksuit and plastic sandals.

"I have in front of me an army at Nissan, more than hundreds of people are dedicated to the case, 70 people at the prosecutor's office, and I am being left in prison for more than 70 days," he added.

"No phone, no computer... how can I defend myself?"

The 64-year-old Franco-Brazilian-Lebanese tycoon said he was the victim of a "plot" caused by opposition to his plans to more fully integrate the auto alliance he led of Nissan, Mitsubishi Motors and France's Renault.

And he said Nissan was trying to "destroy my reputation."

"I have an army of people throwing trash at me every day," he said.

"There are not only allegations of the prosecutors, but also those of Nissan. They take a lot of facts out of their context. It is a distortion of reality to destroy my reputation."

A Nissan spokesman said the company had "uncovered substantial and convincing evidence of misconduct."

"The sole cause of this chain of events is the misconduct led by Ghosn and (right-hand man Greg) Kelly."

Once feted in Japan for his role in turning around Nissan, Ghosn has gone from flying around the world in a private jet to a cell in Tokyo's Kosuge detention centre.

He spoke without emotion, but said it was "very hard" to be unable to speak with his family.

"Since November 19, I could not even call my wife Carole, my children," he said.

He said the lights were on even at night, and with no watch or clock, he had "no sense of time".

"I have only 30 minutes to go outside on the roof. I'm craving for fresh air. Yes, I am strong, but obviously I am tired."

Nonetheless Ghosn, speaking from behind a window and flanked by two guards, did not appear noticeably gaunt and walked confidently into the room.

Japanese authorities did not permit any cameras or recording equipment to be used during the interview.

Ghosn has only been seen in public once since his arrest, during a January 8 court appearance where he denied any wrongdoing.

He faces three charges of financial misconduct, including claims he under-reported his salary, tried to shift personal losses onto Nissan's books and used company funds to compensate a friend.

He denies any wrongdoing and repeated Thursday that "there is not one yen that I have received that was not reported".

The court has judged Ghosn a flight risk who could tamper with evidence if freed, and his own lawyer has acknowledged the tycoon is unlikely to win bail before a trial, which could take at least six months.

He has pledged to stay in Japan, wear a tracking device and even hire guards of the court's choosing, but to no avail.

"I have done everything I can to show I can't flee, to reassure them I would not destroy any evidence," he said Thursday.

- 'Resistance from the beginning' -

Ghosn's arrest has laid bare tensions in the alliance he forged and led among Nissan, Mitsubishi Motors and French automaker Renault.

While the Japanese firms moved quickly to oust Ghosn from leadership positions, Renault was more cautious about the allegations against him, and he resigned before a board meeting to discuss removing him there.

Renault currently owns 43 percent of Nissan, which itself has a 15 percent stake in the French company.

But Nissan overtook its French partner compared to when the alliance was created and Ghosn said he believed his attempts to further integrate the alliance prompted a backlash among the Japanese firm's executives that resulted in his arrest.

"There was a resistance from the beginning," he said.

During his sole court appearance Ghosn spoke fondly of Nissan, and he said that affection endured despite his situation.

"I love Japan, I love Nissan. I have dedicated so many years to revive the company, to rebuild it again," he said.

"I have nothing against the company."