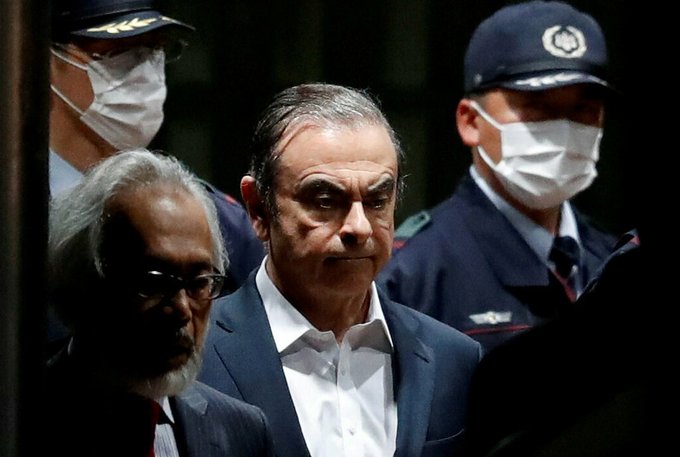 How could one of the most high-profile and instantly recognisable tycoons on Earth escape Japan just months before his trial, when his bail conditions strictly forbade him from leaving the country?

That's the question being asked in Japan, where Carlos Ghosn's abrupt departure and arrival in Lebanon is being seen as an embarrassing lapse in security.

The 65-year-old, who holds Brazilian, French and Lebanese passports, had all three confiscated as part of his bail conditions as he prepared to defend himself against multiple charges of financial misconduct.

One of his lawyers, Junichiro Hironaka, confirmed to reporters that they still had them in their possession, confessing he was "dumbfounded" at the news of his client's flight -- which he heard about via the media.

Public broadcaster NHK cited an anonymous source as saying the Immigration Services Agency had no record of a Carlos Ghosn leaving the country, and authorities were reviewing whether he left using another name.

NHK also quoted a foreign ministry official as insisting: "He was not supposed to leave the country. Had we known about it beforehand, we would have reported that to proper law enforcement authorities."

"If this development is true, it would be a matter between the legal authorities of the two countries," the official added.

Taichiro Motoe, a lawmaker from Shinzo Abe's ruling Liberal Democrat Party (LDP), said the news had come as a "shock" and called for "swift and effective" improvements.

Another LDP lawmaker, Masahisa Sato, said: "If this is true, it was not 'departing the country', it was an illegal departure and an escape, and this itself is a crime.

"Was there help extended by an unnamed country? It is also a serious problem that Japan's system allowed an illegal departure so easily," complained Sato, also a former state minister for foreign affairs.

Although there is no extradition agreement between Japan and Lebanon, the two have diplomatic ties, with a deputy Japanese foreign minister visiting Beirut 10 days ago.

It is also another blow for the reputation of Japan's justice system, which came under widespread fire both at home and abroad during Ghosn's detention for provisions that allow suspects to be held for long periods.

Ghosn and his family had repeatedly attacked this "hostage justice system", and he said in a statement released after his arrival in Lebanon that he was not fleeing justice but had "escaped injustice and political persecution".

He has now vowed to give his side of the story, and Nobuo Gohara -- a former elite prosecutor who now runs his own private practice -- told AFP this could pose a problem for the prosecution, accused by Ghosn's defence team of several illegal steps.

"One thing is for sure. For prosecutors, this presents a significant and serious situation. Nissan must be afraid. Prosecutors are also afraid," said Gohara, who has been outspoken in his criticism of the handling of the case.

"The defence team have completely lost face. They promised he would stay in Japan as a condition of his bail," added Gohara.

The Lebanese government would be unlikely to extradite him even if there was a treaty between the two countries, Gohara said.

One of the reasons authorities used to justify his lengthy detention was that he was a potential flight risk.

At a hearing on January 8 to rule on his continued custody, presiding Judge Yuichi Tada said Ghosn was being detained because he was a flight risk and there was a possibility he would conceal evidence.

The suspect has "bases in foreign countries" and may "escape", Tada said.

But Go Kondo, one of Ghosn's lawyers at the time, countered: "There is no risk that he will run away. He's CEO of French company Renault. He's widely known so it's difficult for him to escape."