SYDNEY, Jan. 20 (Xinhua) -- A huge dust storm has blanketed large parts of outback Australia over the weekend, with videos and images posted on social media showing the jaw-dropping scale of the strange weather event.

Stretching from Broken Hill across to Nyngan, Parkes and Dubbo in the central-west of New South Wales State, local resident and photographer Marcia Macmillan told News Corp on Monday, that although it was the worst dust storm in 15 years, the phenomenon is becoming much more common in the region's drought-stricken towns.

"These monsters have sadly become our new normal, and they are just as corroding to our emotional and mental wellbeing as they are to the landscape," she said.

"It's enormous. We've had five in the last week and they just keep rolling in."

"The relentless drought continues, and dust storms of this magnitude now wreak havoc and devastation every couple of days. They are so common that people continue going about their daily routine without taking much notice."

Caused by a combination of strong wind, dry soil, low moisture in the air and unstable atmospheric conditions, dust storms can trigger serious health problems, particularly for people suffering from asthma or other respiratory illnesses.

"Some of them actually last all day so you're just in it, constantly," Macmillan said.

"They go for kilometers. Photos can't even give the scale. While it looks horrific, it doesn't really show the scale of what we are living through, sadly."

"They're not scary, they're just depressing. Some days you can't see anything outside and the dirt then sits in the atmosphere for days and settles over everything in the house."

Currently in the midst of the worst drought on record, dust storms have become a stark reminder of the stress agricultural communities are facing in the region.

"Conditions in the country are often tough and growing up in the bush, you know that. It's a beautiful place but it's really hard to enjoy the beauty at the moment," Macmillan said.

"Everyone is doing their best to keep a level of optimism and humour, but it just wears you down." 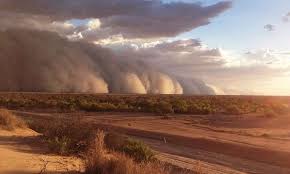